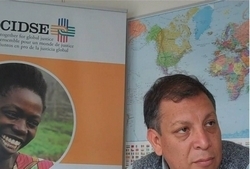 “Under a government which imprisons any unjustly, the true place for a just man is also a prison.” Henry David Thoreau

This July 4th, while executives of Colorado’s Newmont Mining Corporation celebrated America’s Independence Day, a priest was beaten and detained by police for protesting an expansion plan at the company’s Peruvian mine.

Father Marco Arana  was sitting peacefully on a bench in the city’s main square when about 30 police commandos approached and pushed him the ground.  Videos and photos taken on the scene show police beating the priest and dragging him off by the neck. Surrounded by a squadron of officers in riot gear, the renowned environmentalist was taken to the central police station where he was again beaten and refused communication with his lawyer for several hours.

The incident brought to mind Thoreau’s famous phrase, written 170 years ago, when the father of Civil Disobedience went to jail to protest slavery. Today’s ‘just men’ (and women) are still being thrown behind bars, but they’ve picked up a few new tools of the trade, like Blackberries and Facebook.

Marco managed to send this Twitter message from inside the station before contact was cut off: “They detained me and they beat me a lot. Inside the station they continued to beat me, punches in my face, kidneys, insults.” (Marco is recovering from a serious bout of pneumonia and has suffered kidney stones and infections for over a year).

Lawyers from Peru’s most prestigious human rights organization (CNDDHH) intervened, and the government Ombudsman’s office lodged a complaint that Marco was refused medical attention. More than thirteen hours after being detained without a warrant, Marco was released in the early hours of July 5th.

His departure from the station was delayed somewhat, because – true to form – Marco refused to leave his captors until 22 people detained in an earlier protest were also released. As of printing, Marco was resting in hospital while doctors evaluate the impact of the beating on his already weakened lungs and kidneys.

Not surprisingly, none of Peru’s authorities will take responsibility for the incident. The Minister for Justice said the matter was in the hands of the provincial police. Cajamarca’s attorney general said there was no arrest warrant or order against Arana and that the police were acting on their own initiative.

Since when do 30 elite police commandos take it upon themselves to viciously beat a respected member of the community, sitting on a park bench?

What makes the situation even more bizarre and questionable is the fact that Marco was accompanied by an official police guard at the time of the attack. Peru’s government is required by the Inter-American Human Rights Commission to provide Marco with police protection ever since the priest was the target of a massive spy operation in 2006.

So, the public is expected to believe that a rogue band of police commandos randomly bludgeoned a Catholic priest – coincidentally hitting him in areas already weakened by disease – while he was being guarded by one of their fellow police officers. Either Peru’s elite special forces have fallen into anarchy, or someone, somewhere gave an order.

Why this Peruvian priest?

A month ago, Father Marco and other regional leaders declared an indefinite state-wide strike against the proposed ‘Minas Congas’ gold mining project, which would destroy 4 sacred lakes in the province of Celendin.

On July 3rd, the evening before Marco was attacked, Peru’s government declared a state of emergency in the region, suspending civil liberties. The pronouncement came shortly after a violent encounter between police and protesters that resulted in the death of 5 civilians, including a 17-year-old boy and at least 36 wounded.

Since the conflict exploded last year, about 100 leaders, including Marco Arana, have been charged under Peru’s new ‘criminalization of social protest’ laws. This draconian legislation  includes sentences of up to 20 years for blocking a highway.

‘Minas Congas’ is a quite huge expansion project owned by Yanacocha, South America’s largest gold mine, located in Cajamarca province. Yanacocha is controlled by Newmont of Colorado and Peru’s Buenaventura with minority shares held by the World Bank. Farming communities accuse Yanacocha of contaminating their water supply and the mine was responsible for a mercury spill that poisoned over 900 people — the focus of a documentary I co-directed with Peruvian film maker Ernesto Cabellos: ‘Choropampa, The Price of Gold.‘

Ernesto and I met Father Marco during the filming of Choropampa, 12 years ago. In the immediate aftermath of the spill, Marco visited the affected villages and published the first independent study on the devastating impacts. But he insisted on remaining behind the scenes and doesn’t appear in the film. “The farmers are the real heroes of this story,” he told us.

Over the years, Marco and his group of young activists known as GRUFIDES continued their defense of farming communities affected by the mine and we kept filming them, even though ‘Choropampa’ was already finished. In 2004, Marco was awarded Peru’s most prestigious human rights award and in 2009 he was declared an ‘Environmental Hero’ by TIME magazine.

Marco’s defense of farming and indigenous communities has also earned him powerful enemies. In 2006, he and other Peruvian activists were victims of a spy-ring called ‘The Devil Operation’. One of Marco’s farming allies was assassinated and the priest and other activists were harassed, photographed and filmed.

Determined not to be victims, the activists launched a counter-espionage campaign, and captured two of the spies, along with photos, videos and detailed reports of the espionage.

This evidence became the basis for ‘The Devil Operation’, a real-life suspense documentary that has won multiple awards, including the ‘International Human Rights Film Award’ sponsored by Amnesty International and given by the Cinema for Peace Foundation at an event parallel to the Berlin film festival.

Infinity humble, Marco didn’t want to be the film’s protagonist, but the importance of the case for Cajamarca’s farmers, and people around the world suffering abuse at the hands of transnational corporations, convinced him to participate. And, as we reminded him, it was Marco’s enemies who labeled him ‘The Devil’, making him the story’s hero.

I’ll be sending a letter soon, demanding justice for Marco and other environmental defenders under police investigation. In the meantime, please circulate this note and the link to the film.

You can also sign the petition against the Minas Congas project at Avaaz: http://www.avaaz.org/en/petition/Stop_the_Conga_mining_project_2/

The past few months have been especially tough for human rights defenders in Peru, as we find ourselves once again the target of brutal repression. In these difficult times, I’d like to sign off by remembering the words of a very just man who continues to inspire me with his bravery and sacrifice:

“If we don’t risk our lives to save life, what sense is there in living?” (Marco Arana, The Devil Operation).

Thanks to everyone who has helped us bring this important story to life.

DVDs, Press kit, photos and guide for educators and activists available at: www.guarango.org/diablo