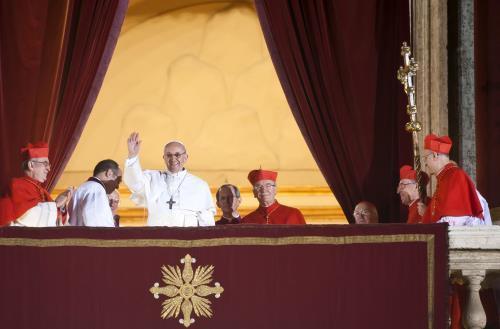 On the rooftops around St Peter’s Square, the world’s television media built makeshift studios with powerful camera lenses fixed onto a simple red copper chimney stack. In the Square itself I joined Catholics from all over the world chatting and making friends, sharing coffee and pizza and umbrellas. Twice we looked up in anticipation, only to see black smoke swirling from the chimney, a sight greeted with disappointed sighs from both the pilgrims and the seasoned Vatican watchers.

How could anyone not get caught up in the hope and excitement of all those waiting in the Roman rain? What an immense privilege to be there. Behind me, I heard a young black American in a hoodie shouting down the phone, perhaps to his mum: “the whole thing’s so cool and awesome”. And it was: an extraordinary and unique event, historic and portentous. A well-known radio journalist, a Catholic himself, told me: “ the media industry can’t get their head around this; its unlike all the other news they cover; they haven’t a clue when the decision is made, or what it will be!”

We gathered again in the evening, packing the square. The suspense was overwhelming as we approached 7 o’clock. Next to me, a woman from Croatia is asked by the roving reporters looking to fill airspace who she wants to be Pope. She echoed many others: “It doesn’t matter, the Spirit is with the cardinals, they will choose a holy man, God will be with him, and we will love him.” I now felt the same: despite reading a library of biographies and commentaries, ascribing the leading contenders with tired old labels, I now wanted to be surprised by the Spirit of God. The new Pope will both make changes and be changed himself.

The smoke when it came looked grey at first, then someone cried: “It’s white!”, and it was. Excited cheers went up, people were clapping, a choir started singing, the bells began pealing: we had a Pope! In the hour or so we waited to meet him, half of Rome seemed to cram into the Square. Meanwhile the cameras honed in on a small balcony in front of the basilica. The pundits continued speculating: most seemed sure it was the Italian Cardinal Scola, given the speed of the Conclave’s decision.

When the name was announced, I was not the only one surprised. The Italians in the crowd still thought he was one of them, from some obscure diocese or dicastery, the news rooms were questioning their experts, most of whom didn’t have a clue. Pope Francis? Then we heard: Argentinian, Buenos Aires, Jesuit, and some of his characteristics began to filter through – his simple lifestyle, his strong moral code, his cry for social justice, his humility.

As I was being interviewed by the world’s media in the wake of the decision, and asked what the priority of the next papacy should be, I said: put the poor first, just as Christ did; understand the realities of the many denied the basic needs of life; the many living in fear of violence; the many who lack any say in the forces that shape their lives.

I stand by this. Pope Francis will inherit a world that has never been more unequal, never more divided, never more environmentally unsustainable. A world where 870 million men, women and children go to bed hungry every night, and where nearly a billion have no access to clean water. A world of man-made climate change and the greedy plundering of creation for the few.

In putting the Church in the vanguard of tackling these huge issues, the continuity between the papacies will be critical. Pope Benedict explained that love – of God and neighbour – is at the core of our faith.  I hope Pope Francis will be the one to bring this good news alive to the world – in the spirit of St Francis Xavier – inspiring a new generation. I believe his manifest simplicity and sense of social justice – in the spirit of St Francis of Assisi – will make the link between global poverty and care for God’s creation. I hope and pray he will ask all of us in the Catholic community to witness to God’s love by bringing together our faith and the actions of our daily lives.

Originally published on the CAFOD-blog