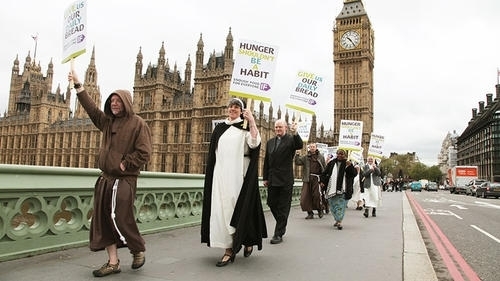 CAFOD has welcomed a new law aimed at making large EU companies more transparent, but we are frustrated that certain exemptions mean some unscrupulous companies will still be able to avoid reporting publicly on the impact they have on human rights, corruption and the environment.

Since 2011, we have been asking the government to make sure multinational companies report on their impacts on human rights, including their effects on workers in global supply chains. More than 55,000 of you have already taken action calling for these robust transparency requirements to be made a reality.

Thanks to MEPs who held out for greater transparency, some progress has been made: European Member States agreed a last minute compromise deal yesterday in Brussels, following weeks of negotiation about the draft law, seen by many as a crucial first step towards preventing human rights abuses and environmental problems in production.

Falling short
The new law sets a minimum standard, requiring large publicly-listed companies in all EU countries to publish information on significant risks and impacts on the environment and human rights as well as measures to tackle corruption. Their supply chains are also covered by the reporting requirement.

But CAFOD is disappointed that several measures which would have required the largest private companies to consider and report on the impacts of their business were blocked by governments including the UK and Germany. This means the law will cover about 6,000 large companies, instead of the 18,000 envisaged.

Further reform needed
Anne Lindsay, lead private sector policy analyst at CAFOD, commented: “This new legislation represents a significant step forward in the fight for greater transparency, but the decision to exempt very large privately-owned companies from the reform is worrying. In today’s world it is perfectly reasonable to want to know if the practices of big businesses are harming the environment or hurting workers in global supply chains. Citizens and consumers want reliable information about the actions companies are taking to prevent these risks – whether they are listed on stock exchanges or not.

“The UK government has spoken extensively about restoring trust in business. Yet in these negotiations it opposed some of the most useful new elements of the law. We hope that our government will take a more realistic view of the role and responsibilities of the largest businesses within our society when it comes to implement the reforms.”

If you haven’t already spoken out for transparency within the global food system then do so now and encourage your friends and family to do the same.