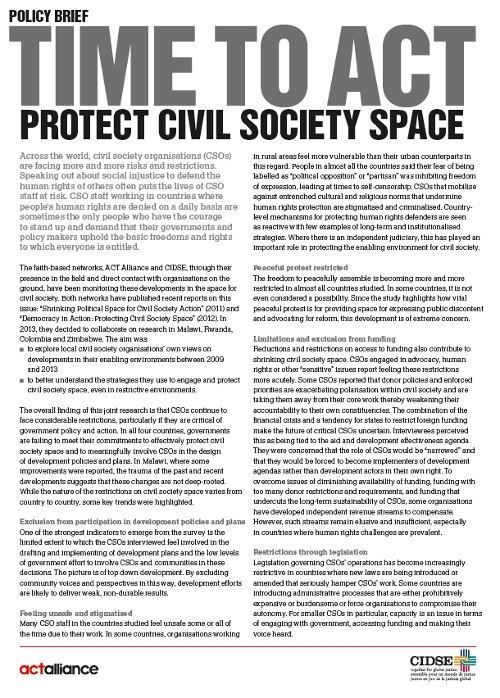 A climate of fear and heavy-handedness overshadows the work enviornment of many organisations that promote democracy, human rights and development, a study has found ahead of a  United Nations hearing on human rights. The study by development organisations, ACT Alliance and CIDSE says staff of civil society organisations in many countries are afraid to do their work and face harassment, censorship and unfair legislation. Those that are critical of government come up for special attention.

Space for Civil Society – How to Protect and Expand an Enabling Environment was presented at the 25th session of the UN Human Rights Council in Geneva on March 13. Using the examples of Malawi, Rwanda, Colombia and Zimbabwe between 2009 and 2013, the study shows many people working for civil society organisations in those countries feel fear some or all the time. In three out of the four countries studied, it had become harder to peacefully assemble or to take part in political processes.

“Many governments fail to protect civil society organisations and neglect to involve them in the design and planning of development projects,” says Julian Waagensen, representing the CIDSE network. “This is a worrying trend, since the ability of communities to lead their own development or take part in government-led projects is vital if development efforts are to produce lasting results.”

In all four countries, many organisations deliberately curb their freedom of expression for fear of being labelled government opponents, a form of stigmatisation that can lead to further restrictions, harassment and possibly homicide.

In Colombia, the government has placed large-scale mining, gas and oil extraction at the centre of national plans for economic growth and development. Organisations working to uphold human rights and protect the environment have serious concerns about this model of development but feel stigmatise and excluded from debates.

“Governments need to involve civil society organisations in the design, content and implementation of development plans. In particular, indigenous groups and other marginalised and disadvantaged groups should be able to participate in policy-making processes,” says Julia Duchrow, head of the ACT Alliance community of practice on human rights and development.