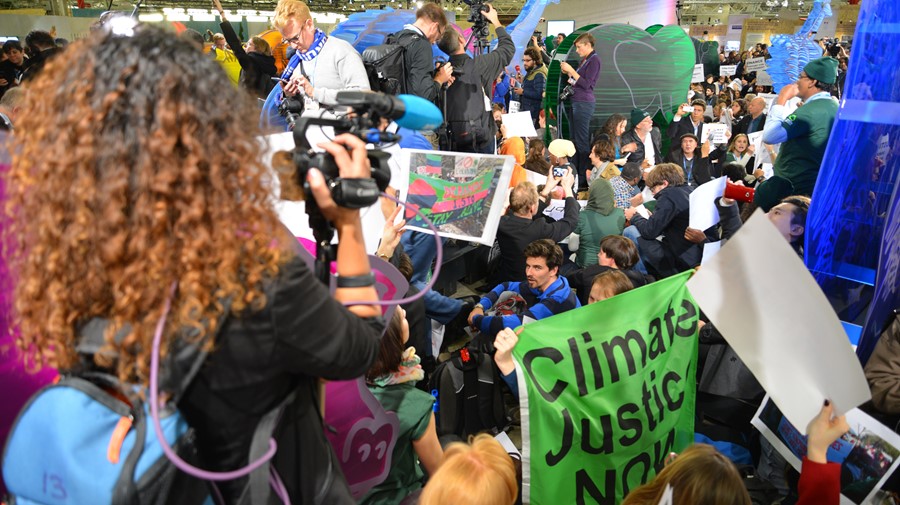 While it is hoped that in the short time left before the finalisation of the text ,some improvements will still be made, the general feeling is one of disappointment among civil society groups who have followed the negotiations. After the publication of the text CIDSE joined many other organisations in a peaceful sit-in to show their concern for the current text. More than 600 people took part in the protest at the site of the climate talks in Le Bourget, Paris, to show civil society organisations will not settle for the latest text, and will keep demanding a better and fairer deal.

CIDSE policy experts analysed below some of the key areas of the text, highlighting gaps and pointing out suggested improvements.

Long Term Goal
“The latest text suggests there’s a serious game of smoke and mirrors being played here in Paris. A temperature limit of 1.5C is being put on the table, but it doesn’t mean anything until we get a clear plan on how the world would achieve it.

A review mechanism that allows each country to regularly increase their ambitions on cutting greenhouse gas emissions, and which truly reflects their contribution to the problem of climate change, is crucial for the vulnerable countries CAFOD stands alongside.” Neil Thorns – Advocacy Director, CAFOD

Climate Finance
“There are still elements in play in the draft outcome that we would like to see retain. In order for richer countries to pay their ecological debt towards the most vulnerable, poor and impacted communities and people there needs to be a differentiation between who provides the finance and who receives it. While all countries are welcome to mobilise domestic and international resources we mustn’t forget that many developing countries will need financial support not only now to start their transition towards sustainable transformation but after 2020. We needed to see clear roadmaps. Developing countries need assurance and predictability hence it is essential and financial pledges are reviewed every 3-5 years. Recycled finance will just not do…we need richer countries to do their fair share and provide finance on top of emissions cuts to ensure we stay below 1.5 degrees”. Meera Ghani- CIDSE Policy Officer

Human Rights
“The way human rights are referenced in the current draft text are too weak to safeguard peoples rights in all climate change-related actions. The language falls behind what was agreed in Cancún 5 years ago. The brackets around both paragraphs even run the risk of getting an agreement without a human rights approach at all! Parties like the EU have to #Stand4Rights in the remaining negotiations and strengthen the language contained in the operational part of the agreement.”-Stefan Tuschen- MISEREOR Policy Officer

Food Security
“We are disappointed that the position of food security within the text has been greatly weakened. While there is a new reference to food security in the Purpose section, we remain extremely concerned by the inappropriate reference to food production and distribution. In addition, references to food security in key articles on mitigation and finance have been removed. There is also no longer any link made with climate actions in the land sector. The EU needs to take a leadership role and ensure that the agreement clearly protects, as opposed to actively undermines, the food security of already vulnerable communities.” Jerry Mac Evilly- Trocaire Policy Officer

Land use
“The current situation represents the worst scenario possible. References to land use have been removed from the entire text and replaced by agreed terms in the 1992 Convention: sinks and reservoirs. There is no link to adaptation and food security. Principles and guidelines were supposed to be further developed by the CNUCCC but this mention disappeared too. Parties are steping back on land use.

Deleting any reference to land use while improvements have been made on safeguards and the recognition of the special characheristics of this sector is giving a wrong signal to further discussions that will take place in Morocco for the COP22 next year, especially in relation to agriculture. Referring to sinks and reservoirs limits the land sector approach to an accounting mechanism that is not taking into account people living on those lands. ” Anne-Laure – CCFD Terre Solidaire Policy Officer

Lima Paris Action Agenda
“We feel extremely concerned to see the endorsement of false solutions including climate smart agriculture. More than 355 organizations said no to climate smart agriculture in september 2015 and its global alliance which is mainly dominated by the fertilizer industry. It gives a bad signal to our societies waiting for transformational actions. Even worst, the institutionalisation of the LPAA in the COP decision is providing legitimacy to actions likely to put in danger the people and their environment.” Maureen Jorand- CCFD- Terre Solidaire Policy Officer

Paris Ambition Mechanism (PAM)
“The current text is vague when it comes to what concrete steps countries will take to limit greenhouse gases, increase ambition and meet their financial commitments. All INDCs that have been submitted have to be revised and ideally improved before the new agreement comes into force. While it is important there seems to be an agreement among the parties to review the INDCs every five years, it’s not acceptable to have no detail on what will be accounted for.

During the review of the INDCs, which focus mainly on mitigation, there also needs to be a review of whether appropriate means of implementation are available for developing countries. Solid financial commitments are also needed before 2020. Only with the necessary finance will developing countries be able to fulfill their INDCs, many of which are conditional today.” Kathrin Schroeder- MISEREOR Policy Officer