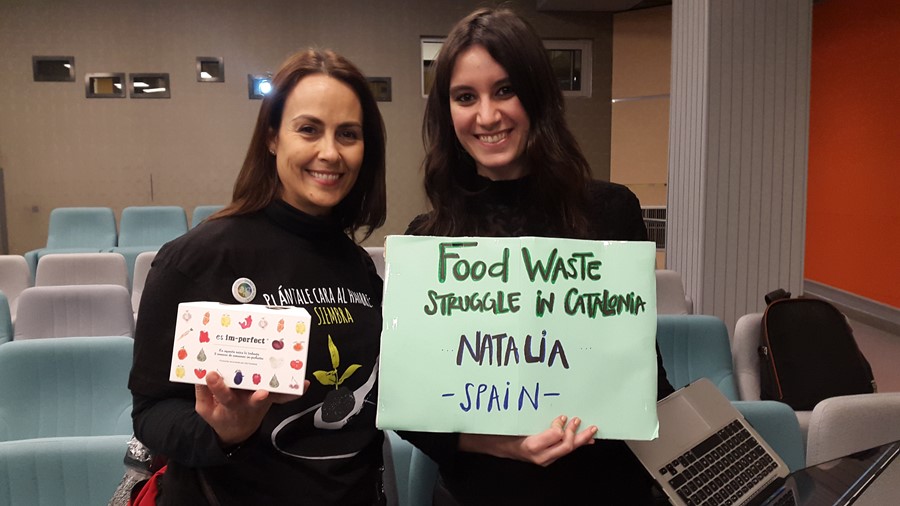 Natalia Lázaro is a volunteer in the Media department of Manos Unidas – Barcelona. She recently graduated as a journalist. In this interview, she shares with us the story of ‘Espigoladors’, a social initiative that seeks to tackle food waste in Catalonia, while providing decent working opportunities for people at risk of social exclusion.

So, Natalia, could you present yourself and tell us what the Espigoladors project is about?

I’m Natalia Lázaro, I’m volunteering in the media department of Manos Unidas in Barcelona Headquarters. We thought that the Espigoladors project was a good initiative to present, because we have started a 3-year campaign in Manos Unidas against hunger. In this campaign we identified that food waste is one of the main problems to fight hunger around the world. So, explaining a project that talks about food waste could be useful for us to know how we can act, how we can do something in our daily lives and also be more conscious about what food waste is. I feel we think it does not affect our lives because have money and can afford food and the products we need. But, it has a consequence and this consequence is bad for the underdeveloped countries, but also for us.

Espigoladors started in 2014. It’s a social project that works mainly in four areas. The first one is about picking up the products – vegetable and fruits that are going to be wasted directly from the fields. So, with a group of volunteers, they go to pick up the fruits and vegetables that for physical reasons, maybe because they are not beautiful or not as nice to sell, are wasted. The next step is donation. They go around different social entities and then they give away the products that they have been previously collected, and then these social collectives give it to people in need or people that go there to ask for food because they cannot afford it for economic reasons. And then, the third area that they are working on is manufacturing. So other kinds of fruits or vegetables – peaches or apples – are manufactured or transformed into jams. They have their own brand name called ES-Imperfect . They have chosen this name to remind us that imperfection is beautiful.

So the first three areas are recollection, distribution and manufacture, and the last one is the commercialization of these products, like the jams or sauces. And they distribute these products in different food shops around Barcelona and Catalonia.

Is it a project specific to Catalonia or is it also found around Spain?

The main goal they have is that people end up buying food waste. They realized that food waste is also linked to negative thoughts and what they want to do is to revert this idea and that people understand that the food that is being wasted, is not because it’s bad, it just because it’s not beautiful. Sometimes it is even healthier than the ones that we buy in the supermarket! So, currently, this project is found in Catalonia only, because they have just started, they have been working for a year. Their goal is to replicate this business model, if possible around Spain, but also around the world. They are putting their focus on local production, and you have local production around the world.

The current food system is working in the opposite direction, its working to produce massive amounts and huge quantities, just controlled by few companies and states and this initiative wants the opposite. To start strengthening the local system and giving the opportunity to the local producers to be more independent and to earn more money, which would be better for the whole country at the end.

How many people are working on this project and how do they see the possibility to expand, scale-up the project beyond Spain?

So now it’s a very small team, they just have six staff members and then the rest of the people are volunteers. They are around 60 and 80 volunteers, and all the volunteers are people at risk of social exclusion, so they also want to promote and give job opportunities to these people.

Do the people working there see a transformation in the people coming to buy food? Are people living in poverty, being able to eat this food? Is it improving their life and the way they think?

Yeah, I think that they notice different benefits, for example, on the one side, they are making opportunities for the volunteers who are at risk because of economic reasons. So it’s people that are having a job, so this is one benefit.

When we talk about food waste, it’s said that it’s the people in the supermarkets who are guilty for such food waste, but what they realized in this organisation is that, actually, the producers don’t want to waste the food they don’t sell, they just don’t find the way to donate the products that they are not going to use. So what Espigoladors wants or is trying to do is to professionalize this area.

They don’t pretend to change the system, because I think they know that it’s not going to change, this is a utopia , but I think that the idea is, we have this system, what can we do? So what we can do is to act local and just work with the local producers and eat our local food, because why do we have to buy food outside, if we have food in our own country? And the food that we are buying outside might be from underdeveloped countries, and even the people that are producing this food are malnourished and cannot afford to pay food. So why don’t we focus our work on eating the products that we produce?

How was the experience for you to share the initiative with other people? And how can we repeat and amplify those exchanges?

I think it was really worth it and interesting, because we think that the problems lie in developed countries and this workshop was an opportunity to understand and to go in depth about our actions and way of thinking. So for me it was very interesting to present some alternatives that we can adapt to our daily lives because, I think we are not conscious enough about how important are our actions and, in this situation, it was about food waste and I think it’s a topic that we don’t pay much attention to because we can afford it. So maybe we cannot change the system but we can make it better.

Maybe we expect big things about everything, and it’s not just about doing big things but maybe it’s just about thinking and being conscious about what we do.

For more information, you can visit the Espigoladors’ website here: http://www.espigoladors.cat/es/

This interview was carried out by Ines Bentolia, our former Campaigns Officer.