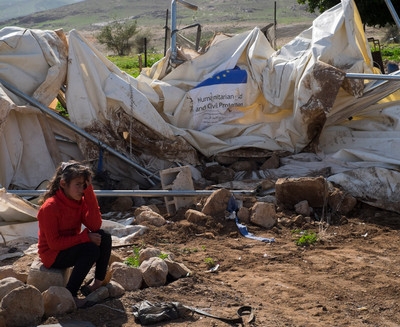 January 24, 2017, Brussels – Half a century after Israel seized control of the West Bank, East Jerusalem and the Gaza strip, forced displacement of Palestinian communities is a key concern according to CIDSE, an international family of Catholic social justice organisations.

In the report ‘No Place Like Home’, CIDSE examines the forced displacement of Palestinians as a central issue in the Israeli-Palestinian conflict as it exacerbates the deterioration of social and economic conditions and the isolation of Palestinian communities. While Israel and the occupied Palestinian territory (oPt) are governed, in part, by different bodies of international law, parallels can be drawn between the processes of displacement that are occurring in the different geographical and administrative areas.

“Forced displacement and its effects are a central challenge to protecting the rights of Palestinians and promoting the development of their communities in both the oPt and Israel,” said Brigitte Herremans, from CIDSE’s working group on Palestine and Israel. “Urgent action is needed by the international community, including the EU and its member states, in order to redress the damage done to Palestinian communities. As the primary duty bearer, Israel must uphold its duties under both International Humanitarian Law and International Human Rights law.”

CIDSE and its member organisations have been working for justice in the oPt and Israel for several decades. For the report, they drew on the experiences of the local groups they collaborate with and who are bearing witness to the human rights violations that are taking place.

In the West Bank and East Jerusalem forced displacement is directly linked to Israel’s settlement expansion and its confiscation of Palestinian land. “One of the communities that is targeted is the Bedouin community” said Issam Aruri, director of the Palestinian human rights organisation JLAC. “A very high proportion of Bedouin communities in the E1-zone in the periphery of East-Jerusalem, where Israel seeks to construct a new settlement, have eviction orders against them. Bedouin need grazing lands which are mainly situated in Area C. If they lose this land and are displaced they will lose this traditional way of life and they will be further deprived of basic rights”.

Suhad Bishara, director of the Land and Planning Unit at Adalah affirms that Israel is using forced displacement – both as a policy and practice – within the Green Line as well as in the oPt. “These efforts are currently focused on the Bedouin communities located in the country’s southern desert region, that are facing the imminent threat of massive home demolitions and evictions. Just last week the police killed a local Bedouin man during a home demolitions’ operation in Umm al-Hiran. Israel is seeking to forcibly displace Bedouin citizens from their villages and concentrate them in a restricted area in government-built towns ‒ the only place they will be permitted to reside. By implementing this discriminatory policy, Israel makes vast tracts of land in the south available for the use and settlement of Israeli Jewish citizens only.”

1. The report ‘No Place Like Home’ will be launched at a workshop in Brussels on 26 January 2017. The event, organised by CIDSE, JLAC and Adalah, will take place at ‘Science 14’, Rue de la Science 14b, 1040 Brussels, from 10:00 to 12:00. Issam Aruri, the director of Jerusalem Legal Aid Centre (JLAC), and Suhad Bishara, the head of the Land and Planning Unit at Adalah, will be visiting Brussels for advocacy meetings and are available for interviews.

3. CIDSE is an international family of Catholic social justice organisations, working together to promote justice, harness the power of global solidarity and create transformational change to end poverty and inequalities. We do this by challenging systemic injustice and inequity as well as destruction of nature. We believe in a world where every human being has the right to live in dignity. The members of the Working Group on Palestine and Israel – Broederlijk Delen, CAFOD, CCFD-Terre Solidaire, Misereor and Trócaire – are actively involved in the region through partners in Israel and the occupied Palestinian territory. Together with our local partners, we work to reduce poverty and build peace through development and humanitarian programmes. (www.cidse.org)