From Brazil to the Philippines, the human rights defenders challenge is global – CIDSE
Skip to content 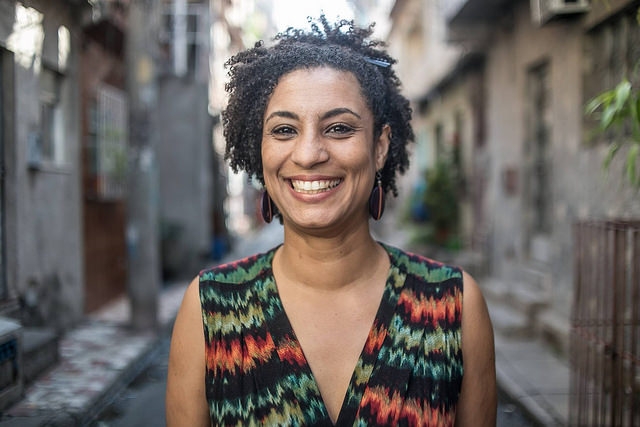 On Thursday 15th March, participants to the World Social Forum 2018 woke up to the sad news of another assassination of a human rights defender, Marielle Franco. She was a feminist raised in Rio de Janeiro’s favelas and recently elected local councillor from Partido Socialismo e Liberdade.
She was assassinated as she came out from a political meeting. This sad news echoed the current criminalisation of activists in the Philippines and many other countries around the world. This growing trend of criminalization of human rights defenders and the increased militarization against them, as we recently witnessed in Brazil, is a direct consequence of global neoliberal political agendas that seek to access still more natural resources.

To reflect on this trend, we held a discussion between movements and communities affected by mining and other large-scale extractive industries such as hydroelectric dams or monocultures. This was co-organized by CIDSE with Iglesias y Minería and other organisations. We had the opportunity to hear from MAM – the Brazilian movement for popular sovereignty over mining, the international articulation of people affected by Vale, WOMIN and many others people in the public who also experience violence when opposing the current development paradigm. All participants depicted the same dynamics of criminalization of leaders defending their land and territory, always endorsed by mainstream media campaigns that discredit them.

In terms of responses and alternatives, we were able to hear a broad set of answers and actions that our partners are undertaking throughout the world to oppose mega-mining projects. Though it is difficult to present all the rich ideas that were shared, we could understand that the alternative is not one, but a broad mix of approaches often complementing each other. To name only a few, the responses go from legal actions, for example in front of the Inter-American Court for Human Rights, to the enforcement of capacities of impacted communities to monitor the quality of their environment. Empowered communities often implement environmental impact assessments and local consultation processes to strengthen the linkages between their members.

Many participants also found strength in support from their local church. Several CIDSE members highlighted the importance of academic studies that strengthen our advocacy, including accounting for the real costs of mining that are often hidden such as the pollution of soils and rivers. Another appreciated strategy is to track the financial links in the mining sector in order to demand that banks and other funders divest from harmful mining projects. This workshop was indeed the opportunity to strengthen our links with partners and members, to further deepen the reflections and better articulate the movements.