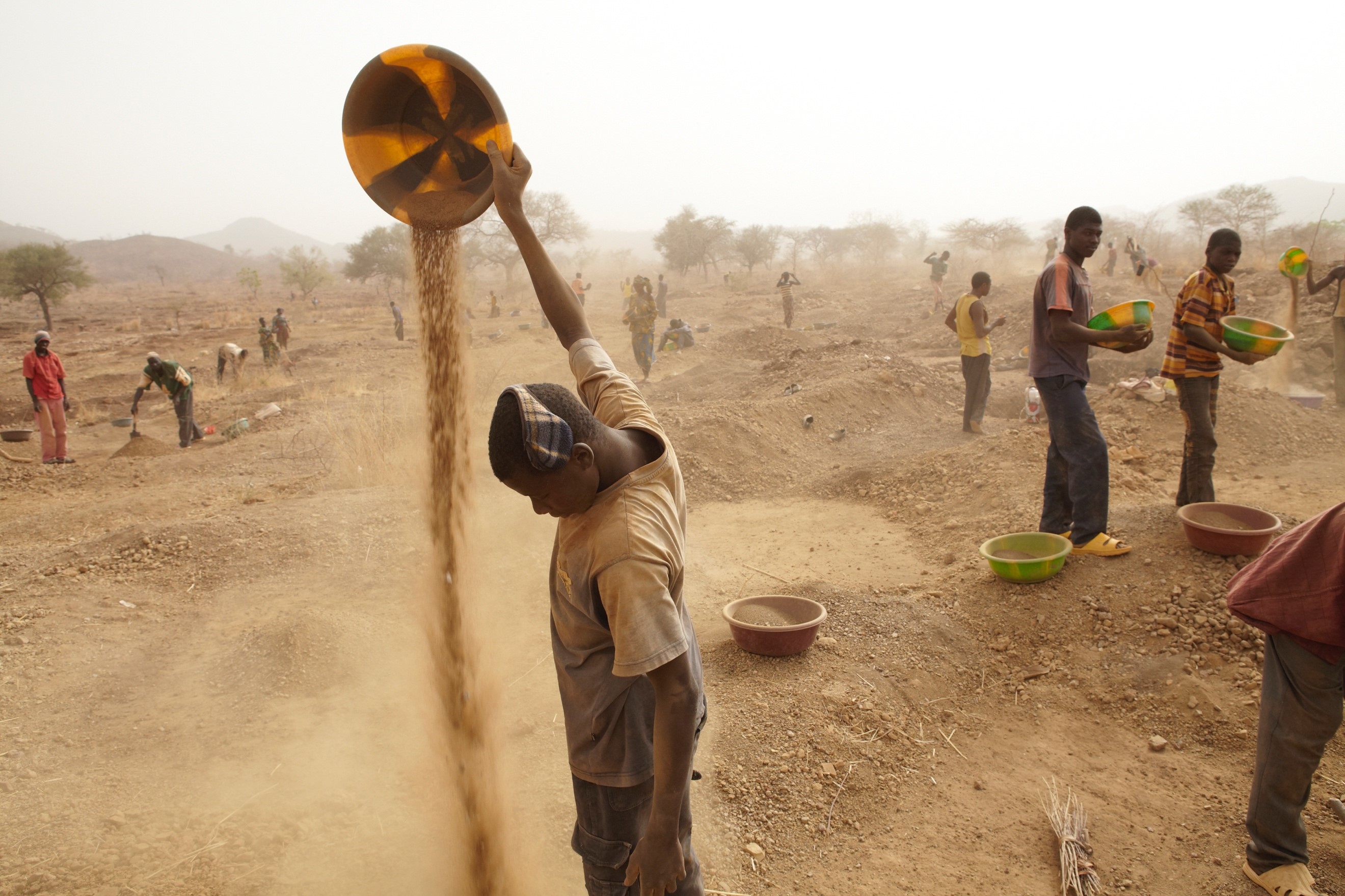 In the last fifteen years the expansion, consolidation and intensification of a model of abusive use of the so-called “natural resources”, of which mining is an exemplary case, throughout the world, has taken place. This model has been devastating and degrading socio- environmentally huge areas, intensifying conditions of global warming and climate injustice. Like many of CIDSE partners have witnessed, this model subjected local economies to a logic of accumulation that privately benefits corporations in the sector, imposes changes and regressions on social and environmental protection laws, impacts the daily lives of traditional, indigenous and peasant communities by violations of human rights, affecting in particular the lives of women and children.

The Thematic Social Forum on Mining and Extractivist Economy has the aim to consolidate a broad movement of resistance and social control over extractive activities.

The CIDSE network, with its long-standing engagement for human rights and alternatives to mining and extractivism, is supporting and actively participating in the forum. Secretariat representatives as well as some representatives from its member organisations (CCFD- Terre Solidaire, France; DKA (member of CIDSE’s member KOO), Austria; Fastenopfer, Switzerland; Misereor, Germany) are onsite. Others, such as CAFOD, England and Wales; SCIAF, Scotland and Trócaire, Ireland have supported the forum in different forms.

Wednesday 14/11: An event jointly organised with TNI on the topic of:

International treaties, legal frameworks and using the law to advance our struggles: this assembly will consider how UN and other multilateral treaties can advance the struggle against mining and xtractivism. Specifically it will consider the possibilities for rolling back the power of TNCs through the adoption of binding treaties.

Check this page for regular updates from South Africa! 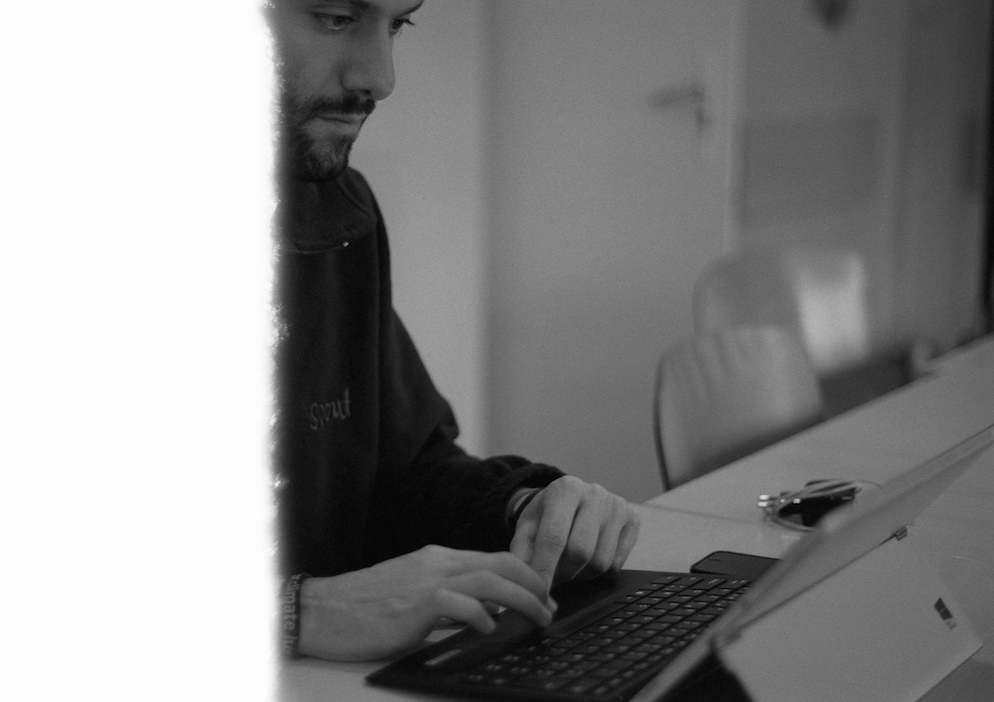 Panel on “ Perspectives for Just Transition and Alternative Development”

« AMANDLA », and the public shouts in response “Awethu”, which means “POWER – To the people”. This is the motto that resonates in the opening plenary of the first Thematic Social Forum on Mining and Extractive Economy. CIDSE and its members are gathered in Johannesburg with partners and other organizations from over 60 countries from all over the world to celebrate people’s resistance to mining and to its devastating impacts. The first day of this thematic social forum was dedicated to self-organized activities.CIDSE staff and members had the opportunity to engage in reflections on the urgent need for a change of paradigm in order to shift away from the current global extractivist economy. This was for us an opportunity to share the outcomes of CIDSE’s April 2018 Systemic Change Forum, within a panel on “ Perspectives for Just Transition and Alternative Development”, co-organized with MISEREOR and partners such as Red Muqui, WoMin and Accion Ecologica. We also participated in the launch of Iglesias y Mineria divestment campaign. This campaign is aimed at countering the dominant narrative of major mining companies who keep on presenting mining projects as opportunities for development, promising jobs and a so called “sustainable” mining. The Divestment campaign aims at engaging with church actors from all over the world to demand that they screen their own investments and divest from harmful mining investments. Many comrades from African countries showed great interest in this approach and were keen to make links with the Iglesias y Mineria network. CIDSE also co-organized a panel reflection on “Dialogue as a transformative action” with Iglesias y Mineria and the People’s Dialogue. This was for us an occasion to recall the longstanding experience of Latin American partners on liberation theology and deepening the concept of dialogue including the basic conditions to engage in a sound dialogue rather than a negotiation, which implies unbalanced power relations. 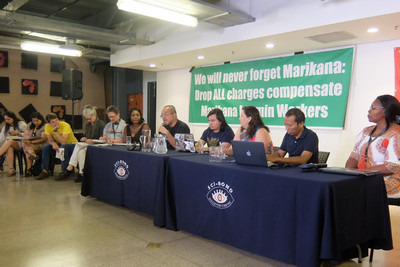 The second day of the Thematic Social Forum on Mining and Extractivist Industries started with songs of resistance from south African communities affected by mining. After this cultural opening, a strong panel of four women shared their social struggles around extractivist activities in Brazil, the Philippines, Nigeria and the US. They agreed on the dramatic increase of extractive activities in the past 15 years while seeing at the same time an increased resistance to it. All over the globe, women essentially sustain the social resistance against extractivist activities. The second panel delivered a sharp analysis of the global capitalist system based on extractive economies that brings along massive social and environmental destruction and climate change. The message was clear: we urgently need substantial systemic changes to save the planet. After the plenary sessions, the participants of the TSF took action and brought their strong messages in a loud and colorful protest march to the headquarters of Anglogold Ashanti, one of biggest gold mining corporations in the world. In the afternoon, ten different thematic assemblies started to develop strategies and building networks around a variety of key issues, such as the new emerging threats of deep sea mining or the increased pressure of the shift to “green energy”, requiring always more minerals. This goes along with an ever increasing criminalization of social struggle in many countries. Padre Dario Bossi from Iglesias y Minería outlined the responsibility of the Catholic Church as a global actor in protecting affected communities. 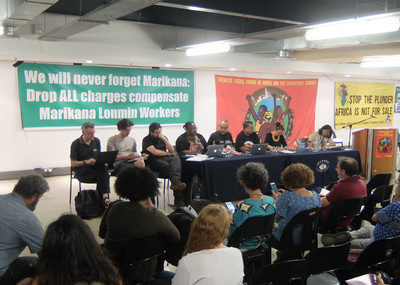 We started this day with a reporting back from the interesting debates that took place in the thematic assemblies yesterday. Striking ideas that emerged were the need to decolonize territories, minds and bodies. The suffering of communities must stop and solutions such as the blue and green economy were dismantled and criticized as continuing the capitalist agenda. This was followed by a plenary on mining, climate and ecological crisis. Representatives from Accion Ecologica shared some experiences from Ecuador, highlighting that the right of Nature can be a powerful tool and raised the question on how to integrate this concept in our work. We were then provoked on many issues by a representative from Rosa Luxemburg Foundation, for example on the ambivalence of climate justice actions in Northern countries: the movements to stop coal or nuclear energy (in Germany but also other European countries) must take into consideration that this reduction does not stimulate the import of raw materials which are produced with extremely negative social and environmental impacts. Global climate justice must take into account all possible negative impacts on everybody wherever they live. So one important question is how we must deal with conflicts of interests within our movements. In the afternoon eight converging commissions took place with the clear intention to identify convergences, divergences and plans of action. In those groups, topics such as the right to say no, alternatives to extractivism, struggles of communities and against companies or international treaties were discussed. Concrete suggestions were made and exchanged in the plenary. Those suggestions now lay the basis for the final declaration of the Thematic Social Forum on Mining and the extractive economy on Thursday, including an action plan for the future. To be continued on Thursday 15th November, last day of the thematic social forum on Mining & Extractivist Economy. 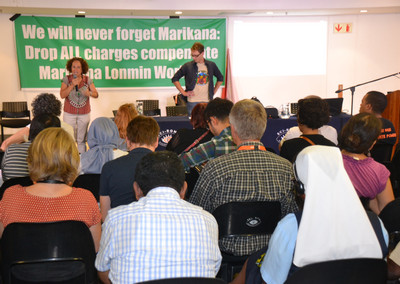 After the initial dancing and singing, the last day of the forum started with a panel on “Just transition and extractives”. A representative from the Latin-American “Sí a la vida, No a la Minería” network, told us the story of two communities from Colombia who stopped mining projects in their territories, not only by protesting on the streets, but also by creating socioeconomic alternatives around sustainable agriculture and ecotourism projects. A panellist from Muqui Network (Peru), reminded us of the importance of building up new collective identities and narratives around the idea of well-being, understood in broad terms, to challenge the narrowness of conventional views on economic growth. He also pointed out the need to reach the younger generations with the message of ecology because the future is in their hands. The morning continued with the presentation of the first draft declaration which was discussed afterwards in the working groups. There was consensus on the main points, but also important concerns were raised in the following debate, such as the framing of “artisanal mining”. Finally, it was agreed to introduce some amendments in the original draft and the steering committee of the forum will write a final version of the declaration, which will be launched in the coming days.

The Thematic Social Forum concluded with the adoption of a final declaration and an action agenda.