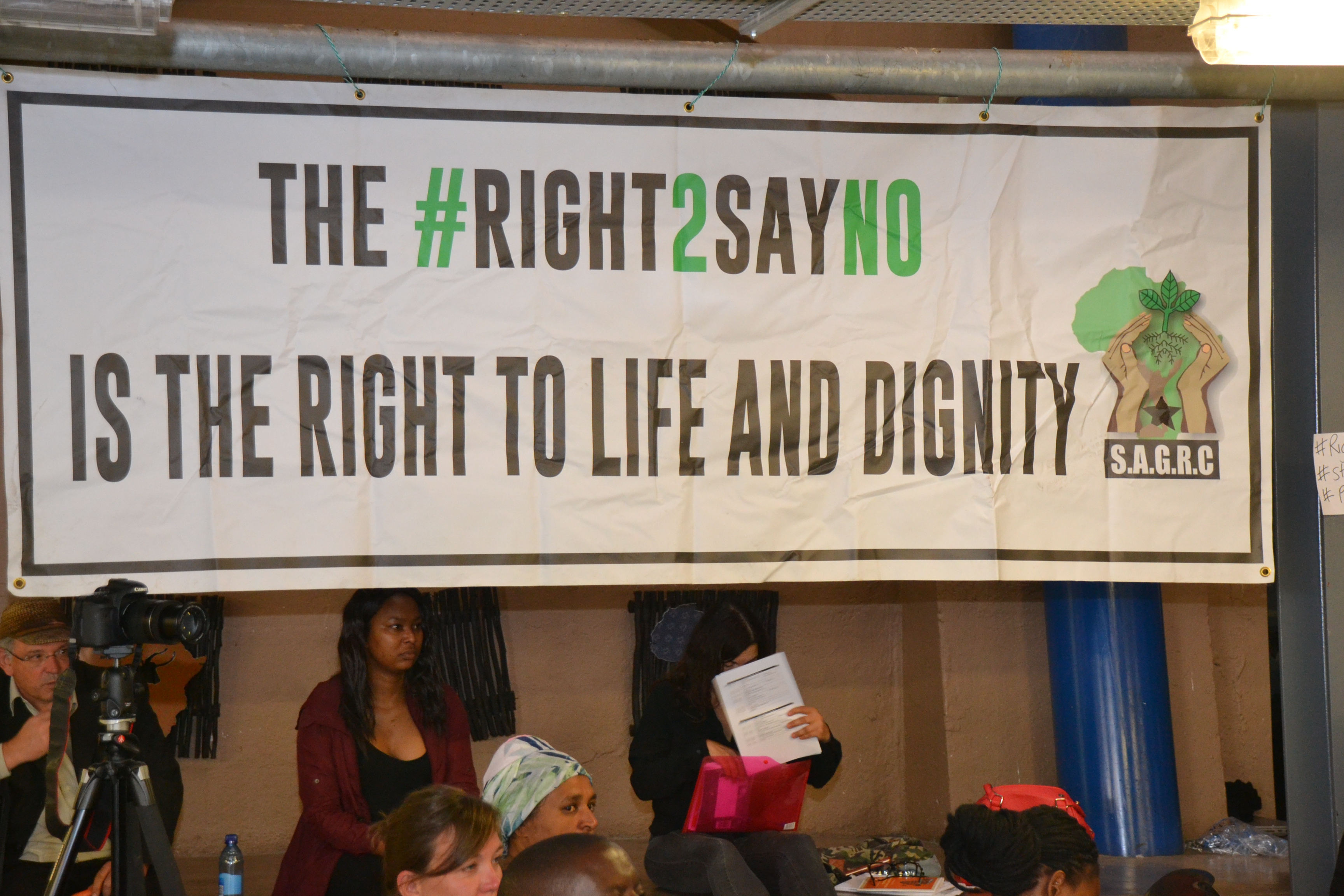 Colonialism with its hegemonic construct and the patriarchal and racist ideologies inherent to it did not accept alternative ways of living. Instead its faith in the superiority of Western ways of thinking justified the violent destruction of the original economic, social and ecological balance in all regions of the world it invaded. Colonialism propagated an alienation from nature and an ecocide which nowadays finds its continuation in extractivism.

As German philosopher Ernst Bloch put it, humans think they have the right to relate to nature like an occupation army relates to enemy territory. In many parts of the world governments and mining companies act as if they had the God-given right to exploit the land at the expense of the local communities and women in particular. Next to cultural traditions that are very creative in inhibiting women’s land ownership, this constitutes the greatest threat to rural communities and women today.

In Southern Africa many communities are being robbed of their land without receiving appropriate compensation. National governments most of the times condone this practice of land grabbing due to the pressure of transitional corporations that are being granted the right to extract minerals from the earth. Almost everywhere in that region it is understood that local communities cannot deny governments and corporations access to the land if it is needed for mining purposes. The governments let themselves be persuaded by memoranda of understanding by the companies which always promise to not only contribute to the wealth of the countries but also to directly improve the situation of the local communities. They promise the creation of jobs and to enhance infrastructures for education, health and transport. In reality nothing or only very little actually happens. Mining companies reap the profits and leave behind environmental degradation and social disintegration. Whatever governments collect in the form of license fees and taxes, if they get paid, often disappear into the private accounts of the externally oriented elite of the national governments. The wealth leaves the country while the social and ecological destruction remains on site.

The negative effects of mining particularly affect women as they are the ones who carry the responsibility for the survival of the family which is dependent on the access to land and water, two resources often polluted and destroyed by extractivism. In extractivist contexts, most of the time it is women who ensure the survival of socially disintegrated societies where many men are prone to alcoholism which in turn affects women negatively. They are faced with increased instances of domestic violence and have to dedicate more time to care work since the men working in the mines often get sick due to the unhealthy working conditions and alcoholism.

In light of these developments it is important to understand the scope of many local initiatives against extractivism. They are campaigning for realizing their “Right to say No”. In South Africa for example, there is the Mineral and Petroleum Resources Development Act (MPRDA), a law that prescribes that mining companies must consult all concerned parties before starting their activities. Unfortunately South Africa is not an exception to the general picture in which both national governments and international companies reduce the required consultation processes to formalities in their belief that they have an unchallengeable right to access the land of local communities: landowners and users cannot refuse the access. Faced with this existential threat, the communities affected by mining are rediscovering the value of solidarity. They are joining forces to claim their space in the centre of decision-making processes concerning their communities. Doing so they are discovering the integrative strength of women, whose voices have been marginalized for too long. Claiming space at the centre of decision-making means that they design their own options for developing their communities and they don’t see a future in extractivism. Positive examples of communities that followed that path of development are very seldom.

Extractivism places a heavy burden on local communities and women in particular, and is also harmful to the environment. This combined assault on humanity and nature is not new, but indicates a continuation that dates back to the birth of the colonial project. From a historical perspective colonialism, understood as the commodification of the earth, its treasures, its flora and fauna and particularly its people for the economic benefit of the colonizing nations, went hand in hand with the domination over women and nature in the self-declared civilized nations. In the colonies people were alienated from nature and by the means of forced labor induced to develop a violent relationship to nature. This relationship is being continued in extractivism. Therefore, the imperative to overcome extractivism constitutes an integral element of decolonization of which the dismantling of patriarchy is a central part of. Extractivism and its violent relationship with nature and people in the surrounding areas of the mines, is a manifestation of skewed power relations, political structures and economic dominance that maintain colonial logic and praxis. The voices of local communities, in particular those of women, are not being heard as public discourses are dominated by externally oriented elites, which is again an element of colonialism. Consequently, we can only successfully overcome the crisis triggered by extractivism if the voices that have been marginalized up until now are given a space in the center of the process of change. The voices of women are central to that.

About the author: Dr. Boniface Mabanza Bambu is a theologian, philosopher and literary scholar from DRC. He works for KASA, Kirchliche Arbeitsstelle Südliches Afrika/ Ecumenical Service on Southern Africa in Heidelberg/Germany where the main focus of his work is apartheid and post-colonialism.