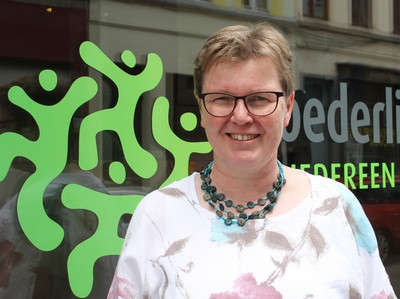 The Hague/Brussels, January 23rd, 2019 – The new President was elected at the CIDSE Board of Directors’ meeting currently taking place in The Hague, Netherlands. Lieve’s mandate will last for three years and she succeeds Eamonn Meehan from Trócaire (Ireland) who had been CIDSE’s President for two years, until his retirement.

“In our globalized world, the old paradigm of economic growth has put our common home in jeopardy. Wars, climate change and displacements destroy the lives of many. And in many societies the unreasonable divide between the haves and have-nots excludes poor people from a decent life and human rights. These injustices call for a systemic change supported by a transnational solidarity network. I see CIDSE as the Catholic international advocacy network that – in alliance with all people of good will – can unite its member organisations to drive the necessary shift to systemic change. So that more justice can be achieved. As the new President of CIDSE, I will foster collaboration among all our members to further influence the decision-making on the international and political level,” said Lieve Herijgers.

Former President Eamonn Meehan welcomed her with these words: “I would like to warmly congratulate Lieve. The role of CIDSE and its individual member organisations is profoundly important in today’s world. As authoritarianism spreads global civil society is often under pressure from governments who see it as an obstacle to their policies. Many activists for justice and human rights are murdered each year as they struggle against oppression and environmental destruction. A future built on justice, equality, fairness and the rule of law is not guaranteed. As a network we need to be strong and support those at the front line of these struggles. These are the values of the Gospel which are at the heart of CIDSE’s message.”

Lieve already stood out for becoming the first female Director of Broederlijk Delen in 2011 after 50 years of history of the organisation, and she has now just become the first woman to take the role of CIDSE President. This is also an exciting time during which the whole board is welcoming more women, with female directors joining the CIDSE board from Trócaire (Ireland), CAFOD (England & Wales), Entraide et Fraternité (Belgium) and KOO (Austria). CIDSE sees this as an encouraging sign towards greater gender equality in our leadership structures.

“After many years of working closely with Lieve, we are very excited to welcome her as our new President. She brings a wealth of experience from her work in Broederlijk Delen with deep reflections on systemic change and gender equality. Her leadership will guide the network through a very important time of work for social and environmental justice”, said Josianne Gauthier, CIDSE Secretary General.

CIDSE also welcomed today a new member, Vastenactie, which brings to 19 the total number of members. Vastenactie is the second member of CIDSE from The Netherlands, alongside CORDAID. They bring many years of experience of solidarity work to the network and we are looking forward to a close collaboration with them.

About Lieve: Lieve joined Broederlijk Delen in 1995 as a staff member at the Educational Department in Mechelen. There she gained extensive experience working with volunteers. In 1998 Lieve became Head of the Campaign Department in Brussels, where she headed the Lenten Campaign for 14 years. In 2011 the Executive Board appointed her Director of Broederlijk Delen. This made her the first female director in the 50 year history of the organisation. As Director of Broederlijk Delen, she also serves on the Board of Directors of CIDSE, the international alliance of Catholic development agencies. She was elected to the Executive Committee in 2017 and became Vice President in 2018. In January 2019 CIDSE’s Board of Directors appointed Lieve as its first female Director. Lieve Herijgers also serves as a member of the Board of Directors at: 11.11.11. (Coalition of the North-South movement in Flanders) – NGO Federation – Netwerk Rechtvaardigheid en Vrede (Flemish Justice and Peace Network) – Episcopal Commission for Diakonia – Welzijnszorg (Catholic non-profit organisation focusing on poverty reduction in Flanders) – Orbit (catholic non-profit organisation focusing on migration, multiculturalism and diversity) – MO* (Flemish magazine on development cooperation).