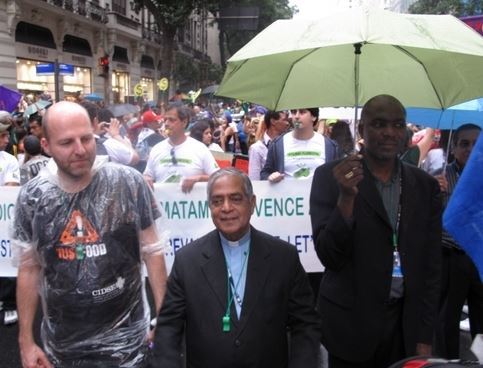 In Rio de Janeiro, the differences between Copacabana and the Rocinha favela exemplify what is wrong with our world, but hopes that Rio+20 will result in bold action are fading.

The bustling beaches of Copacabana and the centre’s shiny skyscrapers show participants to the Rio+20 conference on sustainable development the bright side of Brazil’s booming economy.  But the country’s economic growth is leaving many behind, like the inhabitants of the Rocinha favela. Here, nearly 200.000 people live in less than one and a half square kilometers, struggling to make a decent living.

The gap between Rio’s rich and poor is only one example of the consequences of our flawed economic system, but it is an unmistakable one. Sadly, the final declaration text of the conference, which negotiators have passed on to their heads of state and government for approval, makes no serious attempt to bridge this gap.

For example, the declaration is loud on the positive contribution private sector can make to sustainable development, through market-based solutions and new technologies. Its promoters will be eager to capitalize on the new business opportunities these ‘green’ economy measures will offer. But the text is rather quiet on the negative social, environmental and human rights impacts of (mainly multinational) companies, which need to be addressed to make development more sustainable and just.

At the same time, the document’s lack of concrete and structural measures on pressing issues such as food insecurity and climate change illustrates its limited consideration for the world’s poorest and most vulnerable.

The declaration talks more about re-establishing growth, affected by the global economic downturn, than about building a more just and sustainable world. It is more Copacabana than Rocinha.

Development and environmental organizations, trade unions and other civil society actors have criticized the contents of the declaration. While Rio+20 negotiators have prioritized ‘green’ economy measures, they say sustainable development is also about realizing the full respect of human rights, creating a healthy business and financial sector which works for people not for profit, as well as about recognizing planetary boundaries and fundamental reconsideration of our consumption and production patterns.

Thousands of people loudly voiced their disappointment on Wednesday (20 June), during a march organised by the People’s Summit, a parallel event to the official UN summit. At the march, Bishop Theotonius Gomes, President of Caritas Bangladesh, said that “leaders should not be afraid to take decisions that count”, warning that the poorest would pay the consequences of inadequate measures. In his country Bangladesh, the livelihoods of coastal communities are threatened by the rising sea levels, consequence of a rise in global temperatures due to climate change.

After several days with plenty sunshine, Rio welcomed heads of states and governments in arrival for the summit with dark clouds and rain, as if to emphasise that the prospects for an ambitious outcome are grim indeed.