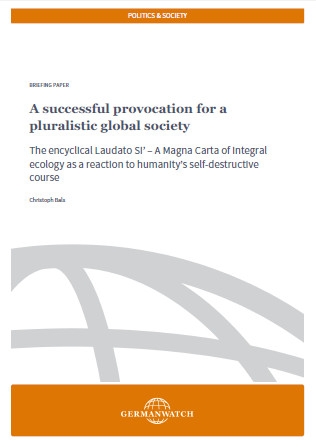 The encyclical Laudato Si’ – A Magna Carta of integral ecology as a reaction to humanity’s self-destructive course. Briefing Paper by Germanwatch, September 2016 (Available in EN-ES-GE)

Summary
This background paper explores the potential relevance within a pluralistic society of the important encyclical Laudato Si’ issued by Pope Francis in June 2015. It considers whether the encyclical documents a reflected faith that accepts the primacy of science in secular knowledge as well as the primacy of democratically elected governments, human dignity, and human rights in the political sphere. Laudato Si’ presents a paradigm shift from the image of the dominion of mankind over the rest of creation to universal fraternity with even weak and marginalised people as well as fellow beings threatened with mass extinction. The Pope carefully double codes the paradigm shift in scientific and theological terms. On this basis, the background paper explores whether this encyclical could provide new stimuli within a pluralistic society. The Pope presents it as a counter-strategy to strictly utilitarian approaches, in which people experiencing social exclusion – the weak members of the ecological environment – are threaten to slip through the net. The encyclical therefore calls for the protection of common goods such as the environment and the climate and insists on financial commitment for those affected by climate change. The background paper concludes with a discussion of whether religion can help to motivate the necessary collaborative action in a pluralistic society or what functional equivalents for this task might look like.