Food and climate: how my lunch relates to drought in Somalia – CIDSE
Skip to content 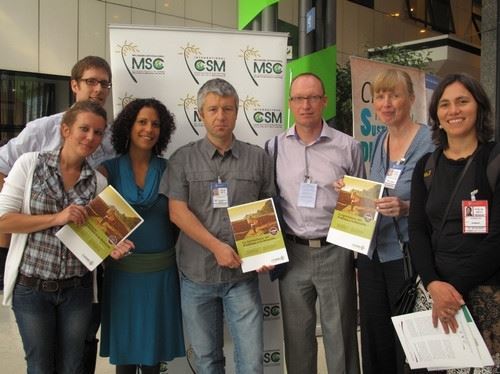 It is not uncommon to see images of starving people in developing countries on TV or in the newspapers. About once a year there is a major humanitarian crisis in some part of the world and suddenly we get inundated with the faces of the powerless. Last year, the famine in the Horn of Africa, before that the floods in Pakistan… What they don’t tell you on the news is that these seemingly random environmental shocks are becoming the new normal because of climate change. What they also don’t tell you is that our eating habits are partially responsible for it.

In CIDSE’s most recent publication, “Agriculture: from Problem to Solution – Achieving the Right to Food in a Climate Constrained World”, we look at the key role of agriculture in the climate crisis; both as a victim of nature’s wrath and a major contributor to green house gas (GHG) emissions. Farmers are the first to feel climate change as nature’s fury confuses crops and directly affects food production.  This in turn has an impact on prices, as evidenced by this year’s jump in food prices due to the drought in the United States. For those of us who believe that the Human Right to Food is indispensible, climate change is quickly becoming our biggest menace as it directly puts in peril the food security of millions, particularly those who are already vulnerable.

The way in which we produce the majority of our food today is via industrialized methods which are highly emitting of GHG due to their reliance on external farming inputs, intensive use of synthetic nitrogen fertilizers, methane from farm animals and CO2 released from farm machinery use and large-scale land clearing. The agri-food industrial complex uses the very images of humanitarian crisis to convince us that we need to increase food production lest we all fall victims to a similar fate. But hunger is not just an issue of insufficient production, we produce more per person today than we ever had (even taking into account population growth). Hunger is fundamentally an issue of socio-political exclusion, which keeps the marginalized poor and powerless.

With eyes on profit, agri-food business squeezes the maximum out of the earth’s resources to overproduce. Another thing they don’t tell you is that one third of the food consumed in Western countries is actually wasted and that obesity is quickly becoming the health threat of our time.

This week we are at the 39th session of the United Nations Committee on World Food Security (CFS) in Rome. This is the only intergovernmental body explicitly mandated to address food security.  This year the CFS is going to be discussing climate change and its impact on food security.  In Rome, we will remind them that it is the responsibility of governments to protect, promote and fulfill the realisation of the Right to Food and that this cannot be done without supporting those who are most affected by food insecurity to adapt to climate change.

This, we believe, can be done through promoting agroecological models which apply ecological principles to the design and management of sustainable agricultural production. We would also like to remind them that business as usual is not an option and that we need to transform our entire food system urgently – not just for those who are food insecure but for the future of the whole planet.  We must not allow commercial interests to trump over human rights or the sustainability of the earth.