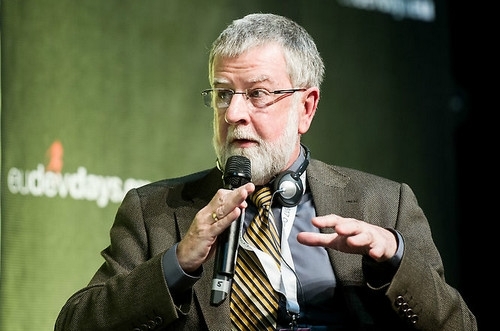 The Right to food was at the heart of a debate on the future of the Millennium Development Goals from a food security perspective, held by CIDSE, Caritas Europa, Caritas international Belgium, and CYNDEP, at the European Development Days – Europe’s premier forum on international affairs and development cooperation – in Brussels last week.

Today 870 million people worldwide suffer from hunger. The evolution of hunger statistics –shows that, the hunger situation is worse today than in 1996. At a moment where the future of the Millennium Development Goals (MDG) is being discussed, this debate aimed at reflecting on the importance of Food Security and the Right to Food as core elements to be addressed in the negotiation of the next development framework.

Father Oreste Incimatata, Secretary General of Caritas Rwanda, highlighted the importance of the Right to Food as a governance instrument that favors participation of the people directly affected. For Father Oreste ’’participation is the main element of a true partnership where local needs and solutions are taken into account when implementing projects and strategies”.  Father Oreste highlighted the importance of the CSOs and national parliaments as guarantors of States’ obligations including the Right to Food.

‘Increased food yields do not necessarily mean a decrease in hunger; they just mean more food. Who is going to get access to that food is a different issue’ says Justin Kilcullen, Director of Trocaire. From his experience on the field, Mr. Kilcullen retains the importance of a clear land law based on human rights. Indeed, the Right to Food cannot exist without the right to land or the right to access natural resources. Moreover, having a law is not sufficient, the rule of law and the political will to implement the laws are essential. Another important issue is coherence: other policies shouldn’t undermine the development policies.

Ute Hausmann, Executive Director of FIAN Germany, underlines the importance of accountability mechanisms for governments to comply with their human rights obligations. Indicators should demonstrate an improvement in the level of nutrition and in the access to productive resources like land or water of those who are undernourished. Initiatives like the New Alliance for Food Security and Nutrition promote investments in agriculture without monitoring the impact on the right to food and should be subjected to revision by the Committee on World Food Security (CFS). Governments have to take serious their reporting obligations under international human rights law and human rights obligations should be an integral part of the post-2015 development agenda.

Jean-Pierre Halkin, Head of Unit for Rural Development, Food Security and Nutrition of the Directorate General for Development and Cooperation, addresses the complexity of food insecurity by stating that ‘past responses were often based on the wrong assumption that economic growth alone will be sufficient to eradicate food insecurity and under nutrition’. This has been proven wrong and the international community has to look differently, ‘we need to work hard on the root causes of food insecurity and not only on the consequences’. Since 2008, the EU has put in place various initiatives to tackle food insecurity (such as the Food Facility) which have had a positive effect, but Mr. Halkin believes that more can be done to tackle root causes and enhance the resilience of the most vulnerable. Concerning Policy Coherence for Development, Mr. Halkin considers the situation has improved compared to ten years ago; there are fewer contradictions among EU policies. Mr. Halkin also welcomed the new FAO-EU partnership, where a more balanced collaboration has been established in working on a shared vision to support global food security. EU support to FAO includes strengthening the CFS as well as the Civil Society Mechanisms (CSM) and the implementation of the Voluntary Guidelines on land tenure in partner countries.

Juan Carlos Garcia Cebolla, leader of the Right to Food team of the FAO, considers ‘Poverty and hunger are political problems, not technical problems. According to Mr. Garcia, the Human Rights Based Approach (HRBA) is the enabling element that can surpass the lack of political consensus by proposing concrete technical and legal solutions .Political will and political coordination at national level in order to enhance the role of the CFS. The agreement at  CFS is a step forward, political agreement has been achieved, however a technical approach is not sufficient, we need to transform this agreement into concrete policies and allocate a budget.

To conclude as Mr. de Schutter stated in his introductory video, “the right to food today is much more than a symbol, much more than just a legal commitment, it is an operational tool that can improve significantly our work towards sustainability development and against poverty and food insecurity”.  Thus, the event organisers -Caritas Europa, Caritas International Belgium, CIDSE and CYINDEP – are calling on the European Union as a whole, including the European Commission and EU member states, to take action on these three fronts: