When the storms roll in, let us be mindful of the poorest – CIDSE
Skip to content 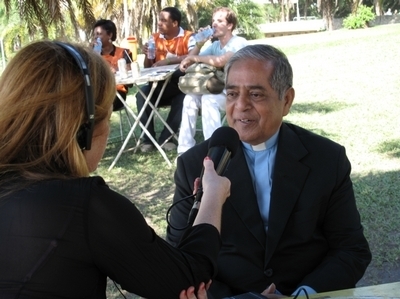 A few weeks from the Doha climate talks, the EU need to honour its promises to support developing countries financially to cope with the impacts of climate change. Sandy reminded us why, says Bishop Theotonius Gomes, President of Caritas Bangladesh

As the international climate negotiations are about to re-open a few weeks from now in Doha (26 November – 7 December 2012), the EU need to honour its promises to support developing countries financially to cope with the impacts of climate change.

The eyes of the world were on New York as super-storm Sandy approached it at the end of October, leaving behind a trail of devastation along the Eastern Coasts of Central America and the United States. Unlike many of the other countries affected, the US are well prepared to deal with violent natural disasters. Even though each life lost is one too many, relatively few people died in the US. If a similar storm had hit the Southern Coasts of Bangladesh many lives would have been lost and even more people would no longer have a roof over their heads, and no services to fall back on.

Research by the Massachusetts Institute of Technology (MIT) found that natural disasters between 1980 and 2002 caused an average of 17 deaths per windstorm in the US, compared to nearly 2,000 in Bangladesh. Storms are equally brutal in any place; but loss of life and devastations can be controlled according to one’s capacity to face them. This includes financial capacity. While developed countries like the US have it, Bangladesh still needs to build this capacity and it needs support to do so.

Although plenty of efforts are undertaken already, Bangladesh will never be prepared enough without the assistance from the EU and other developed countries. Agreements to support developing countries facing ever more serious climate change impacts financially date back to 2009.

Developed countries created a fund, the Green Climate Fund (GCF), pledging $100 billion per year by 2020 for climate needs in developing countries. This December the first period of climate finance ends, but there is no assurance about the future of finance from 2013 onwards.

Right now there is an urgent need to disburse new money for countries vulnerable to climate change. Otherwise, from January 2013 and in the years ahead, countries like Bangladesh might have to fight rising sea levels, erratic rains and increasingly extreme weather on their own, without the adequate means to do so.

We are happy that the EU acknowledged there is a moral imperative to act, emphasising the need for solidarity and support to developing countries in tackling a problem they are not responsible for. But the world’s poorest need to be at the heart of the conclusive negotiations of a new global climate deal and this asks for clear financial commitments.

I therefore urge EU Finance Ministers, who meet on 13 November 2012, to take concrete action ahead of the Doha climate summit.

At last year’s climate summit in Durban the EU was successful in working together with the groups of least developed countries and small-island states to push the negotiations beyond deadlock. It will be an important plus point for the EU to advance that collaboration at the Doha climate summit, which will be difficult without making serious progress on climate finance first.

A positive signal from the EU, looking beyond the present difficult global economic situation and re-establishing its leadership, can give the coming climate talks in Doha a real boost. I hope and pray for this.

Mgr. Theotonius Gomes is a Roman Catholic Bishop from Bangladesh and has been advocating for climate justice together with CIDSE since the 2008 international climate summit in Poznan, Poland.

This article was first published in The Huffington Post