Scottish climate ambition should inspire others – CIDSE
Skip to content 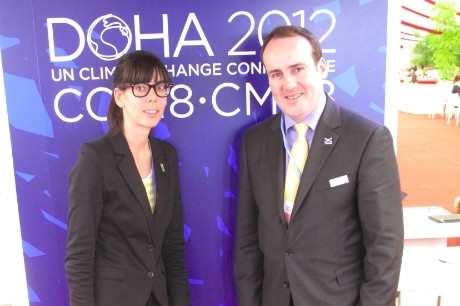 Scotland’s ambitious climate policies should serve as inspiration for other countries to step up their efforts, CIDSE tells Scottish Minister Wheelhouse in Doha.

CIDSE met the Scottish Government Minister for Environment and Climate Change, Paul Wheelhouse MSP, on Friday (7 December), the last scheduled day of this year’s round of the global climate talks in Doha, Qatar.

CIDSE expressed serious concern about the lack of ambition at the conference, saying that countries risk letting the poorest down in Doha. Parties at the Conference must commit to greater greenhouse gas emission cuts to mitigate climate change, and to deliver fully on promises of financial support to developing countries for mitigation and adaptation, as only a few countries have put money on the table so far. The issues are being hotly debated, with only a few hours left before the scheduled end of the conference.

During the meeting, CIDSE acknowledged the role Scotland has played on climate change in recent years. Scotland has one of the world’s most ambitious climate policies, both in terms of reducing emissions and support to developing countries.

“We encourage you to do all you can to convince other countries to follow your example, and to inject political will in the climate talks,” CIDSE’s Emilie Johann said during the meeting. “The lives of millions of the poorest and most vulnerable people are at stake.”

Mr Wheelhouse explained the policies and initiatives which he believes have made Scotland a leader on climate change. Next year, Scotland will also organise an international climate conference with a focus on climate justice.

Let us know why you think we must keep faith in climate justice on Facebook and using #faithcop18 on Twitter. Watch other #faithcop18 videos.