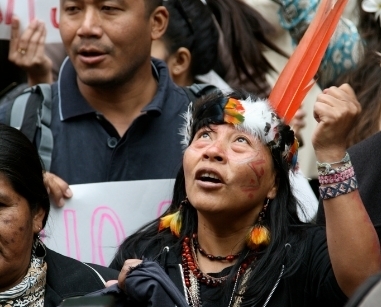 On 2-4 December, the United Nations held its Forum on Business & Human Rights, in Geneva. The event gave occasion to take stock of progress in international efforts to end human rights abuses caused by business activity.

The Forum comes two years after the 2011 adoption by the UN Human Rights Council of Guiding Principles on Business & Human Rights, to implement the 2008 Protect, Respect and Remedy Framework.  However, for people in many communities affected by the operations of irresponsible companies in Asia, Latin America and Africa, the existence of this international minimum standard has yet to deliver tangible improvements in their lives.

In just one example, the last year has seen several killings of representatives of indigenous peoples, environmentalists and human rights defenders in the Philippines.  These have come in the context of opposition to the Glencore-Xstrata-Sagittarius Mines Inc. Copper-Gold project in Tampakan, Mindanao, which if realized would be one of the world’s largest open-pit mines.

Local communities and civil society organizations have emphasized the urgency of improving access to justice for those harmed by business activities, as well as the need for effective extraterritorial actions by States where multinational companies are based.  For example, this would include introducing requirements for due diligence by companies, so that they identify at an early stage the risks posed by their activities, and effectively prevent and mitigate any negative impacts on human rights.

A number of mechanisms will need to be used in the short, medium and longer term.  States need to do much more at national level to meet their “duty to protect” by ensuring that businesses respect human rights.  At the same time, several initiatives are calling for a binding international treaty.  If we are to see wide-scale reductions in instances of human rights abuses as a result of business activities, it is important to make progress on both approaches in parallel, building on efforts to date.

Finally, we need evidence of the impact of actions by States and companies in specific contexts towards effectively ending human rights abuses, and of what still needs to change.  A greater focus on this evaluation by the UN’s Working Group on Business & Human Rights would provide a solid basis for recommendations in relation to the future development of international mechanisms.

Several CIDSE-connected side events were organised at the UN Business & Human Rights Forum in Geneva, 2-4 December:

CIDSE’s German member organisation, MISEREOR, co-sponsored an event called Global Business –  Global Accountability? Obstacles to Justice, and another one titled Holding Corporations to Account for their Failure to Exercise Human Rights Due Diligence: Experiences in Transnational Litigation. MISEREOR was also involved in a third event, as was our Swiss member organisation, Fastenopfer: Addressing justice, due diligence and access to remedy in the context of the extractive industry. Cases in the Philippines, Mozambique, Palestine, Southern Africa and Thailand.

Holding Corporations to Account for their Failure to Exercise Human Rights Due Diligence
Addressing Justice, Due Diligence and Access to Remedy
Global Business, Global Accountability? Obstacles to Justice