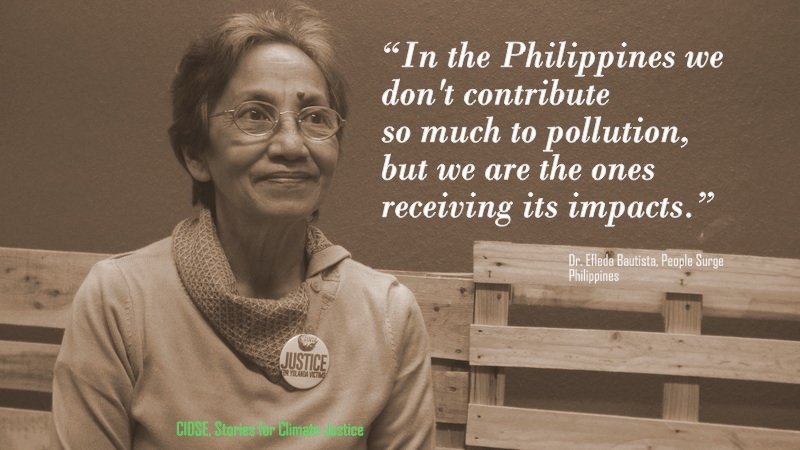 CIDSE believes that climate change is not only an environmental problem, but also a developmental emergency directly affecting people; especially the most vulnerable ones.

We have been asking people struggling directly with climate-related issues what climate justice means to them, and what they expect from COP 21. We are collecting their answers in a series entitled “Stories for Climate Justice”, that will include stories from different parts of the world, highlighting specific issues, all feeding into the climate justice debate. Below you can already read about the first stories or listen to them first hand through our videos.

Climate Justice and Human Rights: Maximu Ba Tiul from Guatemala
“We should not have investments tackling climate change that end up breaching human rights, as is the case in my community in Guatemala”.
Representing the Council of People of Tezulutlán, Maximu Ba Tiul shared his experience related to the Santa Rita hydro dam project in Guatemala, and talked about the harsh repercussions that this project had on the local Mayan community. According to the constitution, the Guatemalan government should respect the indigenous’ traditional values and should consult them when taking decisions affecting their economic or social development. However, the Council claims that the Santa Rita project was planned without consultation, thus also breaching a requirement by the Clean Development Mechanism.

Climate Justice and Natural Disasters: Dr. Efleda Bautista from the Philippines
“In the Philippines we don’t contribute so much to pollution, but we are the ones receiving its impacts”.
Dr. Efleda Bautista represents “People Surge”, a broad alliance of Typhoon Yolanda victims. People Surge brings people together to help typhoon survivors and empower them to take appropriate actions to reduce the risks for similar calamities in the future. People Surge believes that natural disasters may be inevitable, but people’s lives can be spared if the government takes adequate and prompt action in the face of calamities. Dr. Batista highlights how contradictory it is that many low income countries such as the Philippines feel the repercussions of climate change and pollution even if they are not the ones responsible.

Climate Justice and Community Supported Agriculture: Judith Hitchman from URGENCI, France
“Climate Smart Agriculture, is not the answer, nor is the Green Revolution or Genetically Modified Organisms. I believe that participatory breeding of seeds, peasant agriculture and local food systems built on food sovereignty concepts, with direct networks between producers and consumers that allow peasant agriculture to play a full role in the food system are the answer.”

Judith Hitchman is Advocacy Officer ar URGENCI, an international network for community supported agriculture. The network brings local producers and consumers together to maintain and develop small-scale organic family farming and achieving, through a solidarity-based partnership, local food sovereignty. Urgenci also seeks to tackle climate change by enhancing cooperation and farming methods that are in harmony with nature. Moreover, it wishes to trigger civic responsibility in economic relations by promoting more socially just and sustainable communities, where solidarity and cooperation are the key drivers.

Climate Justice and Women: Cecilia M. Kibe from Kenya
“We don’t want decisions which are made without us [women], we need to be there, physically present, because most of the time that decisions are made in our absence, they do not favor us”.

Cecilia M. Kibe is the Executive Director of the Kenya Climate Justice Women Champions (KCJWC), a network of 30 grassroots women organizations that work to unite the actions and the voices of grassroots women to address the issues of climate change and gender equality, advocate for climate justice, and understand and implement ways in which women can adapt better to climate change. Ms. Kibe comments on the difficulties that women face due to worsening climate conditions in Kenya and how it is important that women’s voices are heard in climate negotiations in order to achieve climate justice.

“Where there is a conflict, there is an understanding of using resources […] Yet, conflicts mean that people don’t see others, they see just themselves. I think that resources can be for all the people, we just have to build trust”.

Baker A’wawdy is the General Director of The Galilee Society – The Arab National Society for Health, Research and Services (R.A.). It is a Palestinian Arab non-partisan, community-wide NGO located in Israel, established by four healthcare professionals. It seeks to defend the rights to equitable health, environmental and socio-economic of Palestinian Arabs living in Israel. Mr. A’wawdy comments on the difficult situation that Palestinians face inside Israel and how these conditions of conflict hinder the capacity of adaptation and resilience of the Palestinian population to climate change.

“We are too comfortable where we are sitting (…) the fear is to move away from that comfort zone. And I think we must bring the human message into that – humanity to save humanity, not to save economies. We are all in this.”

Enele Sopoaga is the current Prime Minister of Tuvalu, a Polynesian island located on the Pacific Ocean. Tuvalu is one of the 52 small-developing island states (SIDS) and, currently, one of the most vulnerable to rising sea levels as a consequence of climate change. Prime Minister Sopoaga assumed office in 2013, and has since participated in different forums to advocate for climate action in the face of his country’s many risks. Recently, he attended the Conference “People and Planet First: The Imperative to Change Course”, held jointly by the Pontifical Council for Justice and Peace and CIDSE in Rome (July 2015).