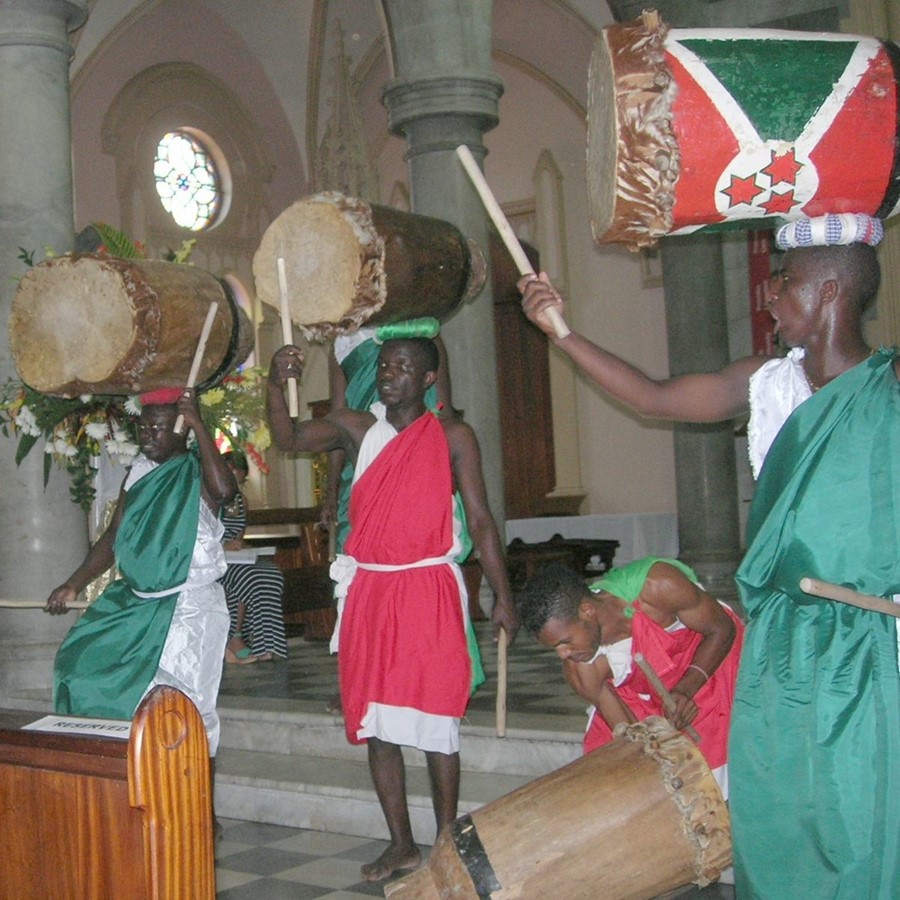 Born in 1915 in Cape Town from Irish parents, at 31 Denis Hurley became the youngest Catholic bishop in the world in 1947 at 31 and archbishop of Durban in 1951. As detailed in his biography written by his collaborator Paddy Kearney, he was a Champion of the reforms and “spirit” of the ecumenical council Vatican II, but also a strong opponent to the regime of apartheid beside Desmond Tutu, Reverend Beyers Naudé and others. As chairman of the Southern African Catholic Bishops’s Conference and also of Justice and Peace Commission, he promoted the pastoral plan “Community serving humanity” and was an important partner and inspiration for CIDSE member organisations before and after his retirement as archbishop in 1992 when he again was parish priest at the Emmanuel cathedral.

The rich legacy of Archbishop Hurley

From 1993 to 1998, Archbishop Emeritus Hurley was Chancellor of the former University of Natal, now University of KwaZulu-Natal. In 2012, this University published an abridged version of the original biography and, on February 12 and 13 2014, hosted a colloquium and workshop entitled “Community serving humanity and beyond – the legacy of Archbishop Denis Hurley, OMI” with Dr. Alain Tschudin as facilitator.

In his opening address, the Anglican Archbishop of Cape Town Ndungane paid an impressive tribute to the late Catholic Archbishop. As former political prisoner in the belly of Robben Island, he noted that Denis Hurley spent his youth on the same island as the son of the lighthouse keeper, but also that lighthouses have different meanings for different people. And he depicted the very ethos lived by Hurley.

Moreover, Desmond Tutu’s successor in Cape Town reminded the participants of Denis Hurley’s courageous positions about the struggle against apartheid and HIV/AIDS, for the transfer of the values of the Kingdom into human society, but also for the ordination of women, ecumenism and interfaith dialogue.

Describing the present situation of South Africa after 20 years of democracy and before elections of the 7th of May, Archbishop Ndungane explained that “life has not changed for the still disadvantaged and marginalized. We still have a long way to go. Understanding and finding ways to work with this social reality lies at the heart of the legacy left by Denis Hurley: love God above all things and our neighbour as ourselves and promote justice as one of the most important practical ways of expressing our love.” And he added that “Hurley warned us that the big corporations set the pace and dominate the world economically – prices and profits dominate and those that cannot compete get left behind. For the Church, to make an impact on highly socialised societies, it must concentrate on social issues such as education and health, employment and housing. Like Hurley, our primary role is to do the right thing, to commit to social teaching and never be afraid of raising questions.”

After this tribute, there were witnesses of “Friends of Denis Hurley” as Dominican Marie-Henry Keane, representing the Denis Hurley Association London; biographer Paddy Kearney, Dr Ela Gandhi, granddaughter of Mahatma Gandhi; Sipho Mnguni, Justice and Peace Commission; Michaela York, Denis Hurley’s niece, and Jacques Briard, CIDSE representative. Later, various panels included human dignity and community followed by serving humanity and beyond, and on the second day “from Memory to Legacy”. These comprised academics and practitioners from NGOs and other groups including some former or actual partners of CIDSE member organisations as the Diakonia Council of Churches founded in Durban by archbishop Hurley, the Women Leadership and Training Programme (WLTP), Pietermaritzburg Agency for Community and Social Action (PACSA), but also various local communities including the uMbumbulu Peace Forum (from one of the locations with the worst history of violence in the country) and the Congolese Consciousness Forum representing foreign African refugees.

In his intervention, Professor Devenish, University of KwaZulu Natal, also declared that South Africa has indeed come a long way, but still have a long way to go. He said that, since 1994, “3 million housing units have been built, 75 % of the population have now access to electricity and sanitation compared with only half in 1994” and that “since 2001, the number of social grant beneficiaries has increased from approximately 3.5 million to nearly 16 million in 2013.” But, some NGOs staffs members underline that these significant progress are also given by government, “without consideration of how many families can pay water and electricity or to reduce their cooking, when there are, for example, about 44 % of jobless people among 3.5 million inhabitants in Durban and when, in fact, the ANC government helped more commercial farms than the small black peasants.” That is why Professor Devenish made mention of “a state chronic crisis, the widespread service delivery protests being a clear manifestation of this.” For him, “this is a recipe for revolution or insurrection” and “this is not only a challenge for the government of the day, but for the community at large, for civil society and religious organisations.”

Other speakers confirmed the centrality of human dignity in the life-work of Archbishop Hurley and spoke of the need to emphasize moral and servant leadership in order to foster democracy under the challenging conditions described above. In an interview conducted with him towards the end of his life and presented to the participants, Hurley affirmed the need for ethics to “govern human behaviour” and returned to “that question of Christian love” in relation to promoting the “potential of what the Church is capable of”.

Inspired by this, the participants broke away into various language groups (English, Zulu and French) to translate the discussion into tangible outcomes that were presented in the plenary session. They includes a forum/platform for awareness, activism and engagement, workshops, a “Hurley” handbook for raising awareness of values as Love, Justice and Peace as well as of current issues, with special emphasis on marginalised groups and “the Poor” taken to include those living with HIV/AIDS, Refugees, Women, Workers and finally the promotion of structures and organisations to consolidate the legacy of Denis Hurley, to remain “prisoners of hope” and to hold the bridge of social justice and peace.

From local to African and world–wide levels

After this University colloquium and workshop, on the evening of the13th of February or 10th anniversary day, a four day event started with the blessing of foundation stone for the Denis Hurley Centre by Cardinal Wilfried Napier and interfaith prayers by Ela Gandhi (Hindu), AV Mahomed (Muslim) and Paddy Meskin (Jewish) in relation with Denis Hurley’s episcopal motto “Where the Spirit is, there is Freedom”.

On 14 February, Fr Sean O’Leary, director of Denis Hurley Peace Institute, gave the 2014 Hurley Lecture on “Justice, Peace, Reconciliation and Forgiveness through an African Lens: DHPI lessons from 2004 to 2014″. This event took place in the Denis Hurley Hall of the Diakonia centre.

From experiences in countries as Burundi, Zimbabwe Nigeria, Sudan or Uganda, he showed that price of peace is important, but that those who are suffering carry it a lot and also that, quoting Nelson Mandela, reconciliation means economic and social reconstruction.

This theme was also explored in a workshop by Bishop Dowling, Saydoon Saved of Religions for Peace, South Africa and Fr Peter-John Pearson, of the Catholic Parliamentary Liaison Office.

During the final public meeting, Paddy Kearney reported back on the process of the Denis Hurley Centre (DHC). Currently accommodated by Hindu associations, whilst construction on the site is completed, DHC welcomes many local homeless and jobless people on a daily base. But being based in one of the busiest transport hubs in Africa, it receives a lot of refugees arriving from different regions and countries of Africa (Zimbabwe, Burundi, Rwanda, DRC, Congo-Brazzaville…). That is why the final meeting was accompanied by both dancers from Burundi and by the Zulu Choir of Emmanuel Cathedral.

Toward the end of 2014, DHC will move into a new building alongside Emmanuel cathedral to be completed by the end of September 2014 to continue to promote extensive outreach and training as well as primary health care for the homeless, unemployed and refugees. So, its coordinator explained that beside personal and collective local, national and overseas supports, there is still a need of Rands 5.4 million. In addition funding will be needed for furniture and equipment as well as staffing.

Moreover, before the intervention of Jerry Hurley, Denis Hurley’s nephew coming from Australia, Jacques Briard presented a message on behalf of CIDSE:

“When Archbishop Hurley was a great Church leader in Durban and in South Africa, during very difficult years, said he, he often came abroad to challenge and inspire not only the CIDSE member organisations, but also Church leaders, Justice and Peace Commissions, Christian communities, political leaders, academic authorities, socio-economic actors, mass media and the public, who were not necessarily ready to struggle against the apartheid regime during the Cold War. As there are still millions and millions of poor all over the world, beside the initiatives like Denis Hurley Centre, Denis Hurley Peace Institute and Diakonia Council of Churches, as well as the messages of Archbishop Hurley and now Pope Francis, CIDSE member organisations share the conviction that together we need to indentify and denounce the root causes, real dimensions and consequences of structural injustice and inequality. We need to continue to unite our efforts all over the world to fight together for global justice in the light of the Gospel and to support all who struggle for real human development.”

Beside the already mentioned observations and from various contacts, this CIDSE representation gave the opportunity to better realize a number of other challenges South Africans have to face after 20 years of democracy. So mention was made of “a lack or even a crisis of leaderships in government, political parties and Churches, particularly in the South African Council of Churches”, but also an actual lack of collective commitments in many local communities. Local interlocutors underline the importance to remind their compatriots and particularly young generations of the struggle against the apartheid regime. But they are also inviting overseas public opinions and decision makers to more take in greater account of the real problems of emergent countries like South Africa “where inequalities are growing because a different globalisation than the one promoted by Denis Hurley.”

In civil society, the wish is expressed to maintain local, national and international partnerships, as explained, for example, by Diakonia Council of Churches after its 2013 strategic review process. This CIDSE representation also gave the opportunity to have conversations with ecumenical organisations PACSA and Church Land Programme (CLP) in Pietermaritzburg on the keenness to reinforce links with real development activists of emerging and poor countries as Brazil, India or Haiti.

CLP is making mention of contacts in Brazil with small farmers’ movement MST and Church CPT. Among CLP’s initiatives, there is Padkos made up of two separate Afrikaans words: pad meaning road and kos meaning food. So, it describes food for the journey. Padkos email list provides regular low-traffic email distribution to share some resources. But Padkos also takes the form of a session as the “conversation with Jacques Briard” “because sharing strengthens struggle.”

This limited report is shared with mention of the warm welcome received from South African partners and friends, particularly from Paddy Kearney, Dr. Alain Tschudin and Fr Stephen Tully at Emmanuel Cathedral.