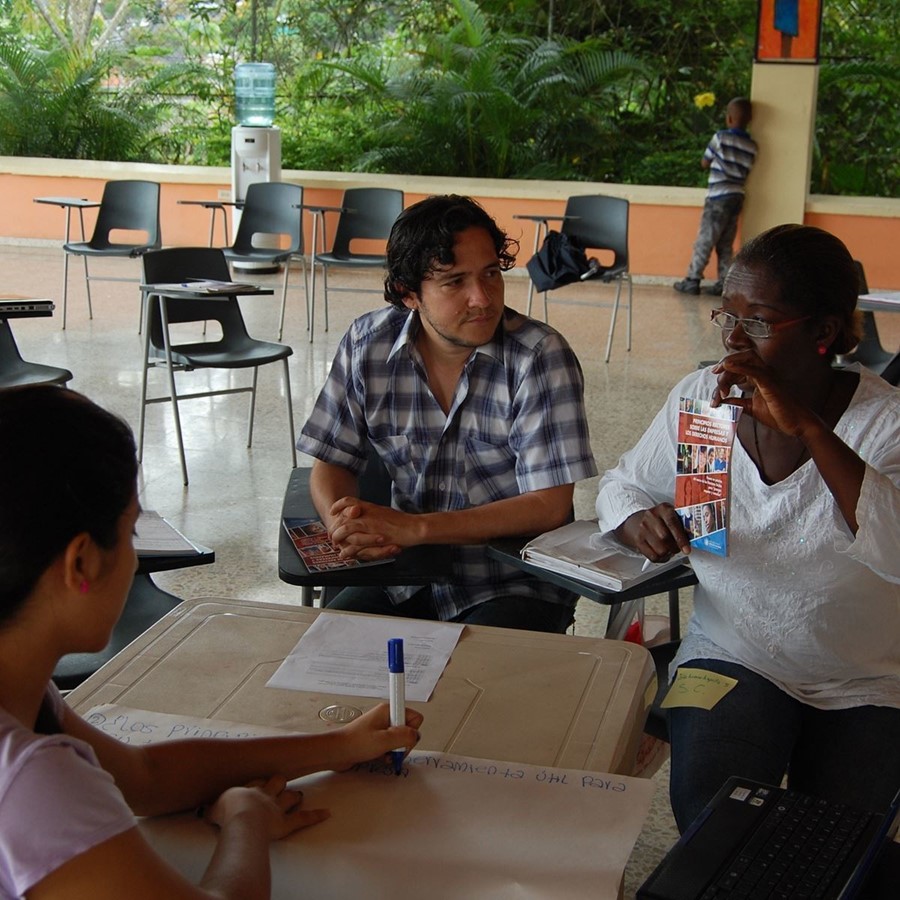 On 17-18 March, CIDSE partner organizations joined a regional dialogue in Bogotá, Colombia on national government action plans on business and human rights.  The discussion came a week after a meeting of governments in Geneva hosted by Ecuador, concerning an initiative to strengthen international instruments to prevent business involvement in human rights abuses.

CIDSE partner organizations Federación Ecumenica para el Desarrollo y la Paz (FEDEPAZ) and Instituto de Defensa Legal (IDL) from Peru, and Fundación Jubileo from Bolivia, gathered together with representatives of civil society, governments, international organizations and businesses at a dialogue organized by the International Corporate Accountability Roundtable and the Danish Institute for Human Rights, in the context of their project “National Action Plans: State Strategies for the Implementation of the UN Guiding Principles on Business and Human Rights.”

Since adoption of the Guiding Principles by the UN Human Rights Council in 2011, implementation at national level has been very slow.  And yet there is urgency, because a wide number of communities and individuals are suffering abuses now as a result of business activity in Latin America and elsewhere.  There are continuing cases where operations of companies have violated a range of human rights, including labour rights and rights to land, livelihood, health, a clean environment, and peaceful protest.

In 2012, in the context of an absence of effective consent processes with affected communities, a series of protests concerning extractive projects including those of the Anglo-Swiss company Glencore Xstrata took place in indigenous regions in Peru, notably Espinar and Cajamarca.  They were marked by detentions, threats of legal charges against organisations investigating human rights abuses and several deaths, and led to the declaration of a state of emergency.

In November 2013, a Nestlé worker and trade unionist was murdered in Colombia, echoing a similar case in 2005 in which it was alleged that company senior managers neglected to use the resources at their disposal to prevent the murder.  In the latter case, a criminal complaint filed in Switzerland against Nestlé was dismissed in December 2013, highlighting the continuing denial of access to justice and the important issue of extraterritorial jurisdiction.

With the situation having even worsened by some measures since 2011, there is increasing demand from civil society and Church voices in affected countries across the globe for effective responses.  The UN Guiding Principles set out clearly that business impacts require a “smart mix” of policy responses that goes beyond a voluntary corporate social responsibility approach and includes regulation.  However in a number of countries, States are weak relative to powerful companies, and in many instances company lobbying prevents or weakens regulation. Another worrying trend has been that those whose rights are most affected by transnational activities are not being involved in national discussions about how the Guiding Principles should be implemented.

Political will is the essential ingredient for ensuring that fewer abuses of human rights occur as a result of business activities.  Alongside enforcement of existing laws, States need to do more now to translate the three pillars of the Guiding Principles – the State duty to protect, the corporate responsibility to respect and access to remedy – into meaningful action.  This should start with a thorough assessment of the adequacy of legal and policy frameworks and a clear strategy or plan to address gaps, developed with genuine input from civil society as well as business.  For example, governments should be introducing requirements  for due diligence,  reviewing  and   improving  access   to  justice  now as   part  of  the implementation process.

At the same time, recognizing the gaps in the Guiding Principles, CIDSE supports developing an intergovernmental process towards a binding international treaty.  If we are to see wide-scale reductions in instances of human rights abuses as a result of business activities, it is important to make progress on both approaches in parallel, building on efforts to date.