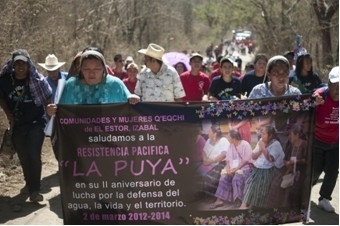 A delegation of European Bishops visited Guatemala from June 22 to 27, 2014, to support local work against poverty and in favour of peace and reconciliation.

The delegation consisted of Bishops Mgr. Juan Antonio Aznarez Cobo from Spain, Mgr. Aloys Jousten from Belgium, Mgr. Hugh Connolly from Ireland and Mgr. Felix Gmür from Switzerland, Father Peter Hughes from the Pan-Latin American Bishops Conference Secretariat, CIDSE leadership and experts. It was the second tour of this kind, uniting high representatives of the international Catholic organisations in their will to fight against the deterioration of the human rights situation, conflict around access to land and against poverty, and in favour of peace and reconciliation in Guatemala. The Bishops hoped to develop a joint reflection on the care for Creation in the Guatemalan context, including the defence of human rights and the environment.

The tour was organised by CIDSE, an international alliance of Catholic development agencies working together for global justice, and its member organisations Broederlijk Delen and Entraide et Fraternité from Belgium, Fastenopfer from Switzerland, Manos Unidas from Spain and Trócaire from Ireland. CIDSE was represented during the tour by Secretary General, Bernd Nilles.

The tour was a response to increased polarisation and misrepresentation of the role of international development organisations, and gave witness to the Guatemalan church’s solidarity and pastoral work. The Bishops met non-governmental organisations and community leaders, both in the capital and in the indigenous communities of Quiché and Alta Verapaz. The outcomes of the tour were presented to international representatives at embassies in the capital on June 27.

On May 23, 2014, police evicted peaceful protesters against a mining project led by Exmingua (Extracciones Mineras de Guatemala, subsidiary of Kappes Cassiday & Associates) at La Puya. The demonstrators, from the communities of San José del Golfo and San Pedro Ayampuc, were joined by the delegation at the local church in the celebration of the Eucharist on Sunday June 22. The struggle at La Puya is one of a number of community resistance movements in Guatemala and other parts of Latin America, where campesinos and communities are threatened by the expansion of mega-projects such as mines, dams and monoculture plantations and their claims to human rights and a life in dignity is severely criminalised.

At the same time as the tour, the United Nations Human Rights Council (UNHRC) in Geneva debated a proposal to develop a binding treaty for transnational corporations to respect human rights, to strengthen global rules building on existing guiding principles. CIDSE has long worked for a binding treaty, and will gather and publish testimonies on recent events in Guatemala.

Photos by the CIDSE delegation.

Press release and testimonies after the Bishops’ visit to La Puya.

Report of the CIDSE European Bishops’ tour to Guatemala.

You can also see some more powerful photos from Guatemala by Elena Hermosa, published by CIDSE’s Irish Member Organisation Trócaire.