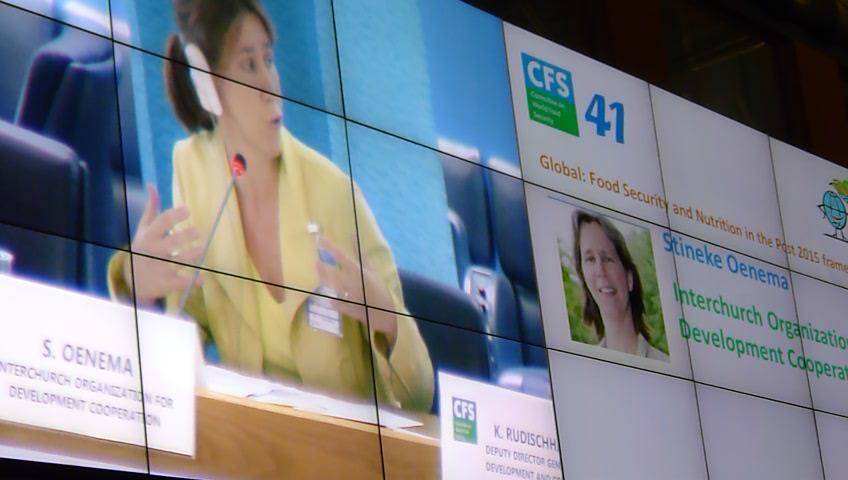 A two-year labour of love for CIDSE was drawn to a close yesterday, through the endorsement of the Responsible Agricultural Investment (rai) Principles.

Whilst we and our civil society friends can be rightly proud of our constructive engagement in the process and the resulting product, the final version of the document put to bed yesterday revealed a lack of political will or courage from decision makers to act in the interests of those whose livelihoods and well-being depend on this document the most: small-scale food producers and voiceless communities worldwide. Once again, corporate clout has elbowed its way to the fore of global food and agriculture policy making, in this case with international trade triumphing over human rights.

Perhaps the most glaring omission in the document from civil society’s viewpoint is the absence of a meaningful commitment to a rights-based approach. Whilst it could be said that a friendly wave has been given in the general direction of human rights through the inclusion of rights-based language here and there, a review of the document in its entirety promptly reveals such references to be little more than lip-service, since it is in fact international trade agreements which have come out trumps in this process, paving the way for increased irresponsible investments antithetical to the right to food.

The fact that small-scale food producers are the main investors in agriculture is not sufficiently reflected in the document, with actors behind large-scale investment being given almost free reign to proceed at will. Whilst the points relating to agricultural workers’ rights and women’s rights certainly takes us one step forward, the priority given to trade agreements inherently complicit in the undermining of those same rights takes us two steps back. The lack of support for agroecology and local food systems and markets, as reflected by the document’s denial of the different impacts posed by different agricultural systems, takes us further towards hunger and poverty exclusion, opening the door for more business-as-usual agricultural practices that are more of a hindrance than a help. With Canada attempting to block the pre-existing, internationally agreed language on Free, Prior and Informed Consent for Indigenous Peoples thankfully did not win in the end, making clear that civil society needs vigilance, even on policy asks that have, on paper at least, been laid to rest. Monitoring thus continues to play a key role. Public policy has been moved to the sidelines in the principles, giving the green light for market-based solutions, leaving small-scale food producers vulnerable to human rights abuses and food price volatility caused by speculation. Finally, the role given for national-level monitoring of the Principles is weak, and must be scaled up if this document is to be of service to poor communities on the ground.

With trade- and market-friendly principles taking pride of place in this document, the ‘responsible’ arm of what should be a shiny new outfit is disappointingly thin, giving little protection for small-scale food producers and agricultural workers in their daily struggles. We as CIDSE, united with civil society and our sisters and brothers in the struggle against poverty, call on governments to act in accordance with the highest standards as set forth by internationally agreed human rights, and to monitor effectively and transparently all activities in the name of the responsible agricultural investment principles.

Back to ‘Food security in the spotlight’ for more Rome reports