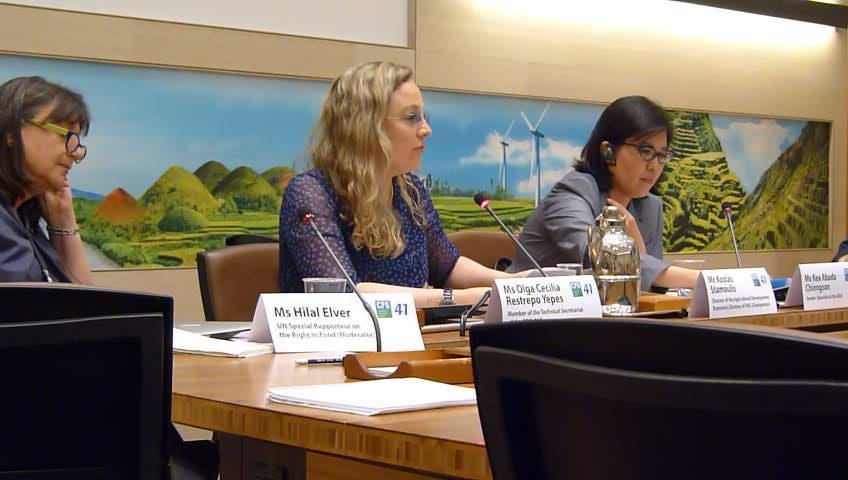 The agenda for the second day at this year’s CFS was brimming with burning topics for debate.

Coordination and linkages were made at both the international level (focusing on food security and nutrition in the post-2015 framework) and regional level (looking at CAADP and NEPAD’S efforts to mainstream nutrition in agriculture) taking centre stage in the morning. However, a common and vital thread running throughout not only these sessions but indeed all thematic areas to be discussed during this week’s negotiations in Rome is – or should be – the right to food. With the Voluntary Guidelines to Support the Progressive Realization of the Right to Adequate Food in the Context of National Food Securitydocument celebrating its 10th anniversary this year, civil society will be challenging governments with one particularly pertinent and probing question at CFS-41: just how far have we come on the road to securing the right for all human beings to live in dignity, free from hunger, food insecurity and malnutrition?

Regretfully, evidence from Rome would suggest that the answer is ‘not nearly far enough.’ As this week’s negotiations unfold, governments’ sustained attempts to dance around – or even outright dismiss – a rights-based approach in food security and nutrition policy making are becoming a growing cause for alarm. As outlined in the Civil Society Mechanism’s position statement, attempts by policy makers to weaken the right to food are in frighteningly abundant supply in Rome: with the decision-making process on the topic having proved an increasingly closed-door operation over recent months, and thanks to governments repeated attempts to sideline, water down, or at worst all together omit the right to food language in global policy documents, decision makers are going against the grain of the CFS itself.

To promote the progressive realisation of the right to adequate food is central to the mandate of the CFS… It is an essential part of the CFS Reform Document, of the CFS Vision Statement and of many decisions since then, including the Global Strategic Framework and the Tenure Guidelines on Land, Fisheries and Forests. Any attempt to weaken the right to food is an attempt to weaken the CFS.
(Civil Society Mechanism)

What’s so right about the right to food?

CIDSE believes that an approach centered on human dignity regarding all sectors and policies should be at the heart of our efforts when working to support communities and people whose access to food is insecure. Following this path will not only help us to get to the crux of the root causes of hunger, particularly in the face of the climate and financial crises, but will also ensure that the voices of those most affected by poverty and food insecurity play an active role in the discussions at hand, giving them the space and the enabling environment they need to become their own agents of change.

These sentiments echo loud and clear amongst our civil society friends, who, ahead of their lobby efforts in Rome this week, have laid forth excellent groundwork through the production of two timely reports:

Speaking at the launch event of the Right to Food and Nutrition Watch report in Rome on 8th October, Special Rapporeur to the Right to Food Dr. Hilal Elver cautioned: “As we celebrate the progress made over the past decade, it is important to keep in mind that we will have to work even harder to realise the right to food in order that hunger and malnutrition no longer afflict humanity.”

What’s clear then is that both governments and civil society alike have their work cut out if we are to render the right to food a reality for the millions currently facing the daily grind of trying to live in dignity, free from poverty and hunger. It’s a scenario which demands urgent, effective action from policy makers, who must do the ‘right’ thing by putting the ‘rights’ back into food.

Read more on the CFS41 here.