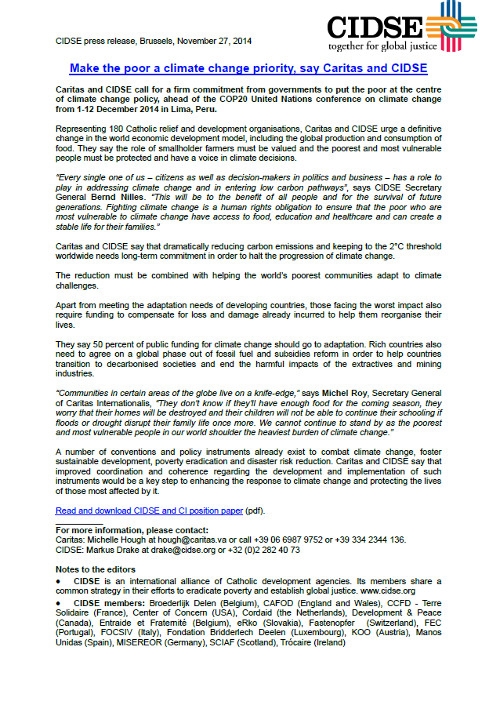 Caritas and CIDSE call for a firm commitment from governments to put the poor at the centre of climate change policy, ahead of the COP20 United Nations conference on climate change from 1-12 December 2014 in Lima, Peru.

Representing 180 Catholic relief and development organisations, Caritas and CIDSE urge a definitive change in the world economic development model, including the global production and consumption of food. They say the role of smallholder farmers must be valued and the poorest and most vulnerable people must be protected and have a voice in climate decisions.

“Every single one of us – citizens as well as decision-makers in politics and business – has a role to play in addressing climate change and in entering low carbon pathways”, says CIDSE Secretary General Bernd Nilles. “This will be to the benefit of all people and for the survival of future generations. Fighting climate change is a human rights obligation to ensure that the poor who are most vulnerable to climate change have access to food, education and healthcare and can create a stable life for their families.”

Caritas and CIDSE say that dramatically reducing carbon emissions and keeping to the 2°C threshold worldwide needs long-term commitment in order to halt the progression of climate change.

The reduction must be combined with helping the world’s poorest communities adapt to climate challenges.

Apart from meeting the adaptation needs of developing countries, those facing the worst impact also require funding to compensate for loss and damage already incurred to help them reorganise their lives.

They say 50 percent of public funding for climate change should go to adaptation. Rich countries also need to agree on a global phase out of fossil fuel and subsidies reform in order to help countries transition to decarbonised societies and end the harmful impacts of the extractives and mining industries.

“Communities in certain areas of the globe live on a knife-edge,” says Michel Roy, Secretary General of Caritas Internationalis, “They don’t know if they’ll have enough food for the coming season, they worry that their homes will be destroyed and their children will not be able to continue their schooling if floods or drought disrupt their family life once more. We cannot continue to stand by as the poorest and most vulnerable people in our world shoulder the heaviest burden of climate change.”

A number of conventions and policy instruments already exist to combat climate change, foster sustainable development, poverty eradication and disaster risk reduction. Caritas and CIDSE say that improved coordination and coherence regarding the development and implementation of such instruments would be a key step to enhancing the response to climate change and protecting the lives of those most affected by it.