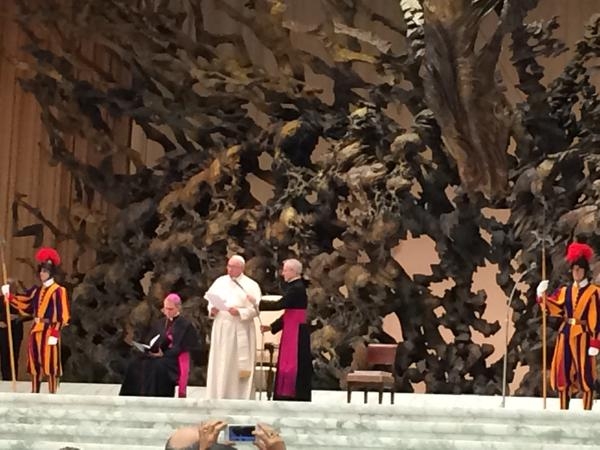 Ahead of International Volunteer Day, Pope Francis greeted more than 2000 volunteers from CIDSE’s Italian member organisation Focsiv at an audience.

Speaking to the volunteers, Pope Francis told them that “solidarity with the poor is to think and act in terms of community and the priority of everyone’s life over the appropriation of property by some. Solidarity also means fighting the structural causes of poverty, inequality, lack of employment and housing, the denial of social and labor rights. Solidarity is a way to make history with the poor”, and that “the main cause of poverty is an economic system that plunders nature“.

Focsiv annually awards the “international volunteer of the year“, and the audience with the Holy Father is part of the ceremonies. Focsiv unites 65 Italian development organisations and more than 36,000 members and supporters committed to the cooperation with the peoples of the South, and to fighting against all forms of poverty and exclusion.

The audience is reported on (in Italian) by Radio Vaticana and (in English) by La Stampa.