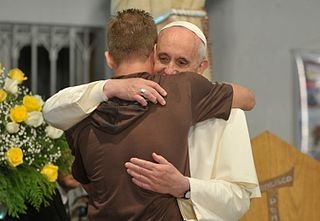 Pope Francis has on several occasions spoken on topics important to CIDSE’s work, whether in his speech to the European Parliament, when giving an audience to volunteers of CIDSE member organisation Focsiv, in a message to the COP20 Climate Conference or in addressing participants in the World Meeting of Popular Movements.

Gathering over 100 groups and movements from all around the world, the World Meeting of Popular Movements included several CIDSE partners, as well as CIDSE member organisations in the role of observers. The unique meeting of organisations advancing the interests of the poor, the unemployed and the landless was organised by the Pontifical Council for Justice and Peace. Pope Francis addressed the meeting in Spanish, confirming to those present that “the poor not only suffer injustice but they also struggle against it”. The speech is also available in French,  German, Italian and Portuguese. No official English translation has yet been published, but an unconfirmed translation exists thanks to zenith.org. CCFD + Terre Solidair, our French member organisation, also has an article in reaction to the World Meeting of Popular Movements.

In a message to the Minister of the Environment of Peru and President-Designate of the COP 20, Mr. Manuel Pulgar-Vidal, Pope Francis called for the negotiations to be “undertaken with an open and generous mind”, since the result has an effect on all humanity, and especially on the poor and on future generations. “The time to find global solutions is running out”, the Pope wrote, concluding that an effective fight against global warming will only be possible through a collective response, free from political and economic pressures, able to overcome mistrust and to promote a culture of solidarity, encounter and dialogue.

When giving an audience to over 2000 volunteers from CIDSE’s Italian member organisation, Focsiv, the Holy Father said that that “solidarity with the poor is to think and act in terms of community and the priority of everyone’s life over the appropriation of property by some. Solidarity also means fighting the structural causes of poverty, inequality, lack of employment and housing, the denial of social and labor rights. Solidarity is a way to make history with the poor”, and that “the main cause of poverty is an economic system that plunders nature“.

And when addressing the European Parliament, he called for respect for human rights rather than economic interest and for care for creation. CIDSE was also invited to the event.

You can see all CIDSE articles on Pope Francis here, and also take a look at our analysis of his first Apostolic Exhortation, Evangelii Gaudium, titled “Memo to all Bishops: Take the Bus!“.