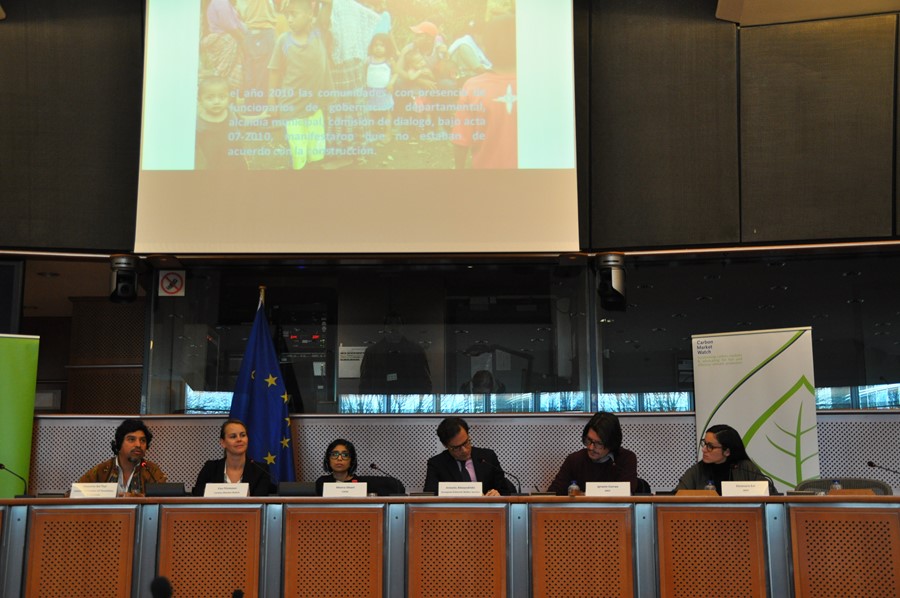 With the upcoming international negotiations on the adoption of a new agreement that will have to replace the Kyoto Protocol as of 2020, 2015 marks a crucial time for climate. With the milestone of the new sustainable goals in mind, the need to protect human rights in climate actions is raised.

On the occasion of the event “A Human Rights Based Approach to Climate Action” organized by Carbon Market Watch with CIDSE, Human Rights Watch and the Council of People of Tezulutlán at the European Parliament on 23 March, the relation between climate change and human rights and the topic of accountability of climate finance were discussed.

The event built on the Geneva Pledge, an initiative meant to highlight the connection between human rights and climate change, launched in February 2015 at the United Nations Framework Convention on Climate Change (UNFCCC) negotiations. “We, the undersigned, note that climate change-related impacts have a range of implications, both direct and indirect, for the effective enjoyment of human rights, and recognize that while these implications affect individuals and communities around the world, the effects of climate change will be felt most acutely by those segments of the population who are already in vulnerable situations owing to factors such as geography, poverty, gender, age, indigenous or minority status and disability.” states the pledge, signed so far by 18 countries (from Europe only France, Ireland and Sweden signed the pledge).

Eva Filzmoser, Director of Carbon Market Watch, highlighted that in current climate change negotiations the human rights aspect is not sufficiently integrated, and that climate change mitigation actions can have adverse impacts on human rights too. This issue comes up in several projects made within the UN Clean Development Mechanism (defined by the Kyoto protocol), like the Barro Blanco case in Panama or the planned Santa Rita Hydroelectric Plant in the Dolores River in Guatemala, financed by several European development banks and by the World Bank’s International Finance Corporation (IFC).

Representing the Council of People of Tezulutlán, Maximu Ba Tiul shared experiences related to this project, and talked about the harsh repercussions on the local Mayan community. The dam will indeed displace thousands of people to generate 25MW of energy, mostly to be exported to neighboring countries. The council also says that an environmental impact assessment for the dam suggests that it would flood local communities and deprive them of access to water, food, transport and recreation. Whereas, according to the constitution, the Guatemalan government should respect the indigenous’ traditional values and should consult them when taking decisions affecting their economic or social development, the Council claims that the Santa Rita project has been planned without consultations, which would also be required by the Clean Development Mechanism. The Santa Rita project has sparked protests by the indigenous Mayan communities, that according to the Council have been repressed violently and by perpetrating several human rights abuses. Violent actions suffered by the local communities included threats by the police, kidnappings, evictions, house burnings, attacks by men wielding machetes and guns, and the arrest of projects opponents. The project, which was also financed by European banks,  raised issues around the need for transparency in climate finance.

As Meera Ghani highlighted, climate finance needs to ensure that developing countries have the resources and ability to develop on low carbon path ways, but it is essential to be transparent about where resources are coming from and which projects are financed.

The conference, with the entire interventions of the speakers, can be rewatched here.

A full conference report, including points raised by all the panel speakers, is available on the website of Carbon Market Watch here.

CIDSE filmed an interview with Maximu Ba Tiul about the experience of the Mayan Q’eqchies’community in relation to the Santa Rita Dam , you can watch it here: