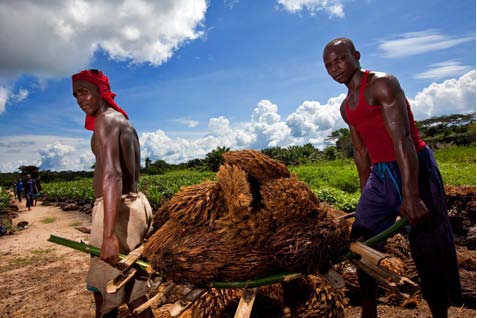 Several prominent development finance institutions (DFIs) are funding Feronia Inc., a Canadian agribusiness company accused of land grabbing and human rights abuses in the Democratic Republic of the Congo (DRC). The attached report, Agro-colonialism in the Congo: European and US development finance bankrolls a new round of colonialism in the DRC. The report and press release are available in EN/FR.

Community leaders living within the 100,000 hectares covered by Feronia Inc.’s oil palm concession areas say the land was taken from them illegally and that they never gave their consent for Feronia to operate there. Feronia is violating DFI policies that prevent companies they invest in from operating on lands that were acquired without the free, prior and informed consent of local communities.

Feronia Inc. operates plantations and a large-scale cereal farm on 120,000 ha of land concessions in the DRC. Its oil palm concessions were acquired from the transnational food company Unilever in 2009.

The company is over 80 percent owned by the UK’s CDC Group and a number of other DFIs—including the French Agency for Development (AFD) and the US government’s Overseas Private Investment Corporation (OPIC)—through their investments in the Mauritius-based African Agriculture Fund (AAF).

DFIs have a mandate to support poverty alleviation in developing countries and must operate according to strict policies that prevent them from investing in companies that grab land, violate labour rights or engage in corrupt practices. A new report, based on company records and testimonies from affected communities, shows how Feronia Inc. is in flagrant violation of the policies of its DFI owners.

“We demand, first and foremost, the start of negotiations to reclaim our rights over the lands that have been illegally taken from us,” reads a statement delivered to RIAO-RDC and the international organisation GRAIN on March 8, 2015 by over 60 customary chiefs and other community leaders from across the district of Yahuma, where 90 percent of Feronia’s Lokutu oil palm plantations are located.

Community leaders interviewed by RIAO-RDC and GRAIN at Lokutu also spoke of a brutal system of labour exploitation and community harassment that clearly violates the DFI policies on labour rights and national labour laws.

To receive a day’s pay, workers on Feronia’s Lokutu plantations say they must complete tasks that are impossible to complete in a day’s work. While the company’s directors are handsomely compensated, plantation and nursery workers say that by the end of the month they have earned around $1.50 per day, well below the DRC’s already low minimum wage.

“We calculated that in 2010, Feronia’s top directors were paid 1,000 times the average annual pay of the company’s plantation workers,” says Ange David Baimey of GRAIN.

One of the Feronia directors who profited most from the company is Barnabe Kikaya bin Karubi, the DRC’s Ambassador to the UK since August 2008 and, prior to that, President Joseph Kabila’s Private Secretary and Minister of Information.

Investigations by GRAIN and RIAO-RDC into Feronia’s company records show that Kikaya was paid a total of nearly $3 million in cash and shares during his time as director with the company from 2009-2014. Most of the money was paid through “rental fees” of between $120,000-$150,000 per year for his residence in Kinshasa and through a buyout of his stake in Feronia’s Cayman Islands holding company. The anti-corruption policies of Feronia’s DFI owners are supposed to prevent such payments to influential politicians.

Community leaders from Lokutu also told GRAIN and RIAO-RDC that Feronia prevents local people from raising livestock or farming within the company’s concession, even on lands that the company has abandoned. Community members caught by company guards carrying just a few nuts fallen from the oil palms are fined or, in many cases, whipped, hand cuffed and taken to the nearest prison.

“Community leaders from the areas where Feronia has its plantations have had enough of this company,” says Jean-François Mombia Atuku of RIAO-RDC. “They want Feronia to give them back the lands, so that they can once again benefit from the use of their forests and farms.”

”The CDC and the other DFIs that own Feronia need to do the right thing: give the people of the DRC back their lands and compensate them for the years of suffering they have endured,” says Graciela Romero Vasquez of the London-based organisation War on Want.

The report, Agro-colonialism in the Congo: European and US development finance bankrolls a new round of colonialism in the DRC, is authored by GRAIN and RIAO-RDC in collaboration with Fundación Mundubat, War on Want, Association Française d’Amitié et de Solidarité avec les Peuples d’Afrique, World Rainforest Movement, Food First, SOS Faim and CIDSE.

Attached you will find the report in French and English as well as the flyer for the debate on this topic. The debate will take place in Brussels on the 16th of June 2015.

For questions on the role of the CDC:

For questions on the role of the AFD/Proparco:

For questions on the role of the Spanish Agency for International Development Cooperation (AECID):

For questions on the role of OPIC: