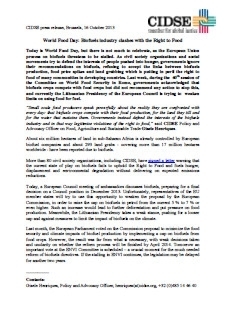 Today is World Food Day, but there is not much to celebrate, as the European Union process on biofuels threatens to be stalled. As civil society organizations and social movements try to defend the interests of people pushed into hunger, governments ignore their recommendations on biofuels, refusing to accept the links between biofuels production, food price spikes and land grabbing which is putting in peril the right to food of many communities in developing countries. Last week, during the 40th session of the Committee on World Food Security in Rome, governments acknowledged that biofuels crops compete with food crops but did not recommend any action to stop this, and currently the Lithuanian Presidency of the European Council is trying to weaken limits on using food for fuel.

“Small scale food producers speak powerfully about the reality they are confronted with every day: that biofuels crops compete with their food production, for the land they till and for the water that sustains them. Governments instead defend the interests of the biofuels industry and in that way legitimise violations of the right to food,” said CIDSE Policy and Advocacy Officer on Food, Agriculture and Sustainable Trade Gisele Henriques.

About six million hectares of land in sub-Saharan Africa is already controlled by European biofuel companies and about 293 land grabs – covering more than 17 million hectares worldwide – have been reported due to biofuels.
More than 80 civil society organizations, including CIDSE, have signed a letter warning that the current state of play on biofuels fails to uphold the Right to Food and fuels hunger, displacement and environmental degradation without delivering on expected emissions reductions.

Today, a European Council meeting of ambassadors discusses biofuels, preparing for a final decision on a Council position in December 2013. Unfortunately, representatives of the EU member states will try to use this opportunity to weaken the proposal by the European Commission, in order to raise the cap on biofuels in petrol from the current 5 % to 7 % or even higher. Such an increase would lead to further deforestation and put pressure on food production. Meanwhile, the Lithuanian Presidency takes a weak stance, pushing for a looser cap and against measures to limit the impact of biofuels on the climate.

Last month, the European Parliament voted on the Commission proposal to minimize the food security and climate impacts of biofuel production by implementing a cap on biofuels from food crops. However, the result was far from what is necessary, with weak decisions taken and unclarity on whether the reform process will be finished by April 2014. Tomorrow an important vote at the ENVI Committee is scheduled – a crucial moment for the much needed reform of biofuels directives. If the stalling in ENVI continues, the legislation may be delayed for another two years.