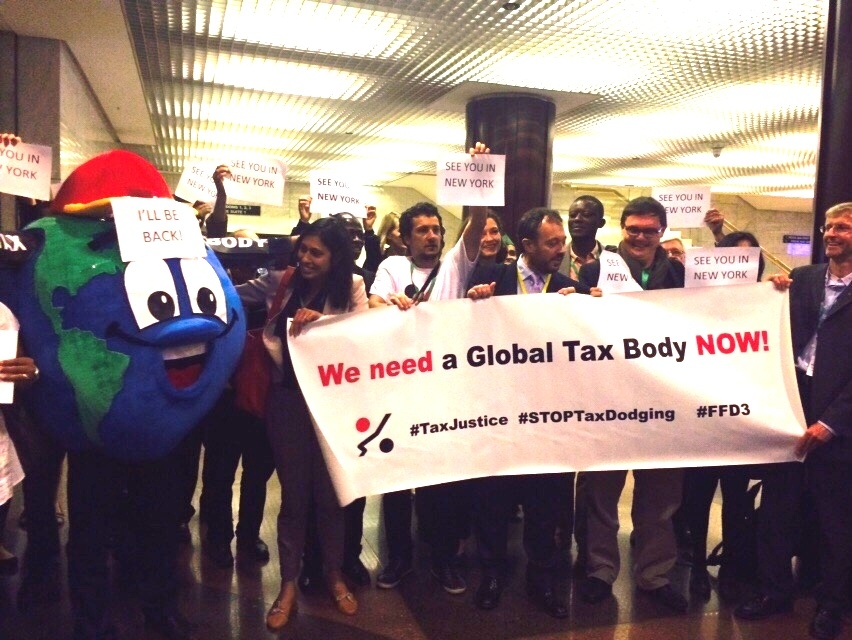 The Addis Ababa Action Agenda, which was agreed upon last night, leaves Civil Society Organisations somewhat underwhelmed and is seen by many as a step backwards in financing for development.

When the UN Third International Finance for Development Conference (FFD3) began in Addis Ababa this past Monday, the agenda had not yet been finalised and a number of developing nations and Civil Society Organisations arrived with high hopes for an intergovernmental tax body. During the drafting sessions in New York preceding FFD3 a number of compromises had been made weakening the first draft of the Addis Agenda. However, in spite of this, discussions concerning the intergovernmental tax body remained open, a final point on the agenda which might have led to a meaningful outcome document. The outcome document entitled the Addis Ababa Action Agenda (AAAA) was agreed upon yesterday and has led to disappointment amongst civil society for a number of reasons.

Firstly, the formation of an intergovernmental tax body was dropped from the agenda. While an increased awareness around this issue is positive, its removal from the outcome document will allow international tax policy to remain the domain of the most powerful nations. Jean Saldanha, CIDSE Senior Policy Advisor, stated that “there was a concerning lack of due process around this issue; negotiations never started because the document was discussed in “informal” bilateral and trilateral meetings behind closed doors”. As a result of this, despite their initially strong position, many developing countries were put under pressure to back away from their position.

Concerning the tax body Lorna Gold of Trócaire, CIDSE’s Irish Member Organisation, said “the more than 500 civil society groups present have expressed serious disappointment at the refusal of rich countries to grasp this historic moment to put in place a global tax body which will address serious issues around corporate tax avoidance and evasion. Without tackling tax issues, it is impossible to see how poorer countries can develop.”

Secondly, the Addis Ababa Action Agenda does not progress the previous Finance for Development commitments, and may in fact be seen as a regression on a number of issues. These issues include; the weakening of commitment to policy space, the lack of mention of combating inequality within and among countries, a weakening of language on progressive tax systems, the lack of commitment to transparency on illicit financial flows, the increased focus on public-private partnerships (and a lack of caution therein), and the decreased recognition of capital controls as part of developing countries toolkit to face financial crises, amongst other concerns. Thus, the AAAA overall, is a weaker commitment to Financing for Development than previous documents.

One promising element is the follow-up process to FFD3 as it will determine whether the commitments on Means of Implementation for the new Sustainable Development Framework are implemented, and secondly, whether there will be a continued international space for discussion and negotiation to overcome obstacles to financing for development. AAAA states that members are “dedicated to discuss the follow-up and review of the Financing for Development outcomes”. Thus, AAAA does not replace the commitments of the previous Finance for Development conferences, but the outcomes of Monterrey, Doha and Addis Ababa should be seen as a whole which will be followed up in the created follow up process. Policy and advocacy work on the follow-up has been a priority for CIDSE; one of the results of which has been a reflection note on the importance of FFD follow-up.

A response statement, supported by CIDSE, has been presented by Civil Society Organisations which outlines a number of concerns about the outcome document. The document is available here and provides a response based on the original Civil Society Declaration here.