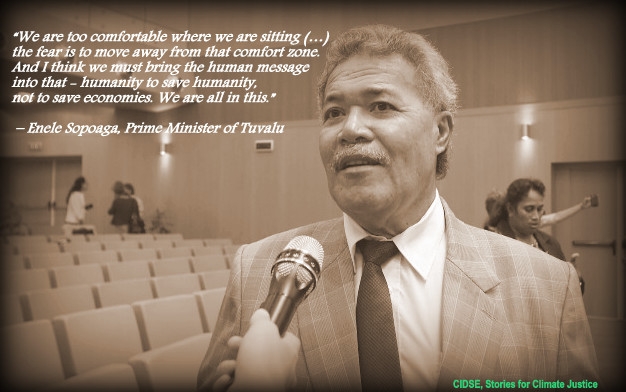 The Pacific Island states have become a striking example of the dramatic consequences that erratic weather events and rising sea levels due to climate change can bring upon societies and ecosystems. What future for an island like Tuvalu and Tuvalu’s children?

“We are too comfortable where we are sitting (…) the fear is to move away from that comfort zone. And I think we must bring the human message into that – humanity to save humanity, not to save economies. We are all in this.”

With sea levels gradually rising, prompted by melting glaciers and ice sheets in the Arctic, small island developing states (SIDS) are increasingly threatened of being erased from existence as they sink more and more into the ocean. Low-lying islands have become in this way a sort of ‘litmus test’ for the dramatic consequences of climate change on human society and ecosystems.

Due to their insular condition, only a few meters above sea level, low-lying island-states and their inhabitants are at the frontlines of climate change. One of the latest reports by the UN Intergovernmental Panel on Climate Change (IPCC) foresees a sea level rise of approximately one meter by 2100. If temperatures are not kept under 1.5°C, small island states could be literally erased from the world map. The most vulnerable among them are Kiribati, Vanuatu, The Marshall Islands, Tuvalu, The Maldives and the Bahamas.

As Prime Minister of Tuvalu Enele Sopoaga points out, the facts are clear. There is living proof that rising sea levels may lead to total inundation for low-laying island states; stronger storms and typhoons have already left many without shelter; agriculture has been highly affected by salt-water intrusion into soil and groundwater, and many of these islands have become dependent on foreign imports of food. Yet the picture becomes grimmer as we realize that beyond the physical and economic consequences, entire languages, histories, indigenous knowledge and a whole cultural heritage are at risk of disappearing underwater.

As the sea overwhelms these island-states and harsher weather events affect entire populations, as well as food and energy systems – essential to human survival –, it is evident that thousands of people will be forced to migrate. According to the International Organization for Migration (IOM), there is an estimate range of climate refugees between 25 million to 1 billion people by 2050 (1) . But climate-related migration is already happening. In the case of Tuvalu and Kiribati, for example, people are retreating to higher ground, where their already over-crowded capital cities lie. The government of Kiribati has begun to prepare for an uncertain future by purchasing land in nearby Fiji as an insurance policy, to ensure future food supply and possibly even conceive this space as a resettlement site (2). However, migration is still for many a measure of last resort.

On this matter, Prime Minister Sopoaga strongly highlights that forced climate migration is a self-defeating option, as it does not address climate change at its roots. Collectively, island nations have contributed to only a fraction of total green house gas emissions – roughly 0.3% (3) , yet they are bearing the high costs of an irresponsible economic model, whose big players are reluctant to take any responsibility. He stresses that there needs to be a conscious transformation of our lifestyles and our societies, one that would allow vulnerable states like his to continue to exist. “Climate justice for Tuvalu”, he says, “is to give them the opportunity to prosper and realize their full potential, while maintaining the right to sovereignty, the right to remain in their islands forever. The climate should not have to make them move away relocate or resettle [elsewhere].”

The case of the sinking island-states is a striking example of what the future would look like for many states and populations around the world if action is not taken at this very moment. It is also a powerful reminder of the challenges we will continue to face. It is by all means an urgent call for a systemic change of our societies and our economies, where the respect for nature and human dignity are at the center stage.

(1) O’Hagan, Ellie M., Mass migration is no ‘crisis’: it is the new normal as climate changes. The Guardian. 18 August 2015. Online. http://www.theguardian.com/commentisfree/2015/aug/18/mass-migration-crisis-refugees-climate-change