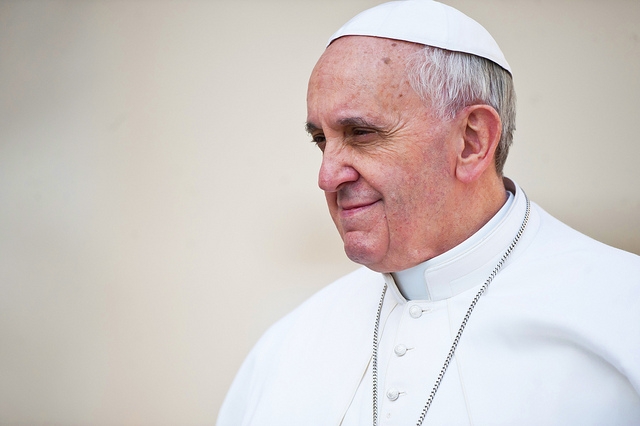 Addressing the UN GA this morning, the Pope has stressed that social and economic exclusion is an attack on human rights and our natural environment.

The Pope pointed out that it is the wrong use of power in our world that has left many in outright exclusion, and has damaged the environment which sustains human life itself. “The abuse and destruction of the environment are, at the same time, accompanied by an unstoppable process of exclusion. Indeed, a selfish and unlimited desire for power and material well-being, leads both to the abuse of available natural resources and to the exclusion of the weak […]”.

He has repeatedly spoken of the devastating effect that extreme weather is having on communities in different parts of the world. Speaking today about climate change, the Pope said: “The ecological crisis, together with the destruction of a great part of the world’s biodiversity, can put in peril the existence of the human species itself. This, and the detrimental consequences of an irresponsible misrule of the global economy, guided by the sole ambition for wealth and power, must be a call to a profound reflection about man”. He calls on the IFIs to prioritise sustainable development of countries and not to blindly submit to the dictates of the financial markets.

Inspired by the words of Pope Francis CIDSE is calling on our political leaders to take urgent action to prevent climate change from pushing people into further poverty. “International leaders must heed the words of the Pope. Human rights and the respect of the environment must be central to the implementation of the new Sustainable Development Goals agenda and the Climate agreement in Paris,” said Bernd Nilles, CIDSE Secretary General. “In this respect, the need for a fair and binding agreement on climate change at the UN Summit this December is essential to change course” said Bernd Nilles, CIDSE Secretary General.”

Two days before the UN Summit on Sustainable Development, a statement coordinated by CIDSE and co-signed by more than 50 political decision-makers, writers, activists, faith leaders and civil society representatives was issued. The call demanded greater ambition in tackling social injustices and calling for a new emphasis on notions of well-being, a culture of care and shared prosperity. As His Holiness has pointed out, there is a “need for a radical shift in the political and economic policies in order to meet the needs of the most vulnerable populations in the world.”