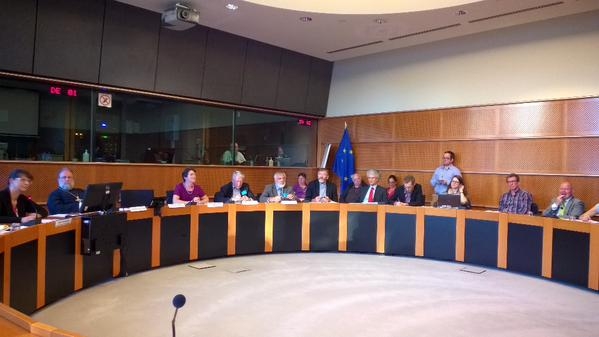 Christian Churches have increasingly taken bold steps to address climate change. Pope Francis has called each of us to take care of our common home in his encyclical letter Laudato Si’, and Christian Churches from different traditions have mobilized their communities across the continent through the organization of pilgrimages for climate justice and the organization of local climate actions.

According to Msgr. Van Looy, President of Caritas Europa, who intervened during the conference: “Policies need to be inclusive and aimed to overcome injustice (..). Stewardship of the creation is key in every human action, therefore the Encyclical calls on the need to rethink our own habits by considering consequences on our planet and on poor people. Political institutions have the responsibility to lead this change and to make it more feasible and easy for people to be involved.”

Faith-based groups called on policy makers to work together to look beyond short-term actions and take lasting decisions for the common good. Their calls also reflect the key principles that Pope Francis raised when he met the environment ministers just a couple of weeks ago: solidarity with the most vulnerable and justice in solving the ecological debt and participation. Bernard Pinaud, Director of CCFD-Terre Solidaire and Vice-President of CIDSE, reminded during his intervention a key point of Laudato Si’ and one that was taken on board by faith-based groups in their calls: there are not several crisis, but only one complex and systemic socio-environmental crisis.

They called the EU political leaders to step up efforts to overcome divisions between developed and developing countries, by contributing a fair share of global efforts and by providing financial technical support to the poorest and most vulnerable countries.These countries are not responsible for climate change and are already facing adaptation challenges and deadly losses and damages.

They called the EU to undertake long term action in developing measures for inspiring and engaging its citizens. Climate change polices must not be targeted only at industrial activities. Climate change is the result of an economic model that demands ever increasing consumption in our households and individual lives. This drive has to be addressed at its root and not just dealing with its consequences. Although science and technology play a significant role in responding to climate change, relying on them alone will not be sufficient. Addressing ethical issues, educating and involving people are musts in climate programmes.

Catholic groups CIDSE and Caritas Europa also ask that the 1.5°C threshold is enshrined in a legally-binding global agreement, to realize the vision set by Laudato Si’. By ensuring that 1.5°C degree remains within our reach, the world community would show commitment to protect all vulnerable groups.

Agreeing in Paris and beyond will only happen with putting aside our various private interests and by focusing on this challenge which we can only solve all together.

Note to the editors:

The ecumenical conference took place after Pope’s Francis address to the UN General Assembly, to which CIDSE reacted with this statement. CIDSE and Caritas Internationalis also held the High level meeting on climate change in New York on 26 September, answering to Pope Francis’ call in the encyclical Laudato Si’ to everyone on the planet to enter into dialogue about how to best shape the future of our common home.