The month of Climate Action has started! – CIDSE
Skip to content 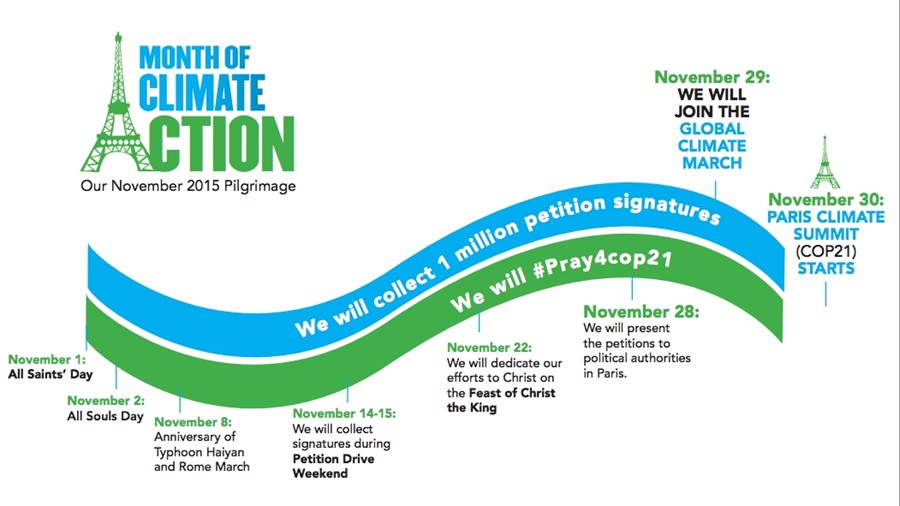 The Global Catholic Climate Movement (GCCM), which is supported by CIDSE, have launched the “Month of Climate Action” campaign, calling for an unprecedented Catholic mobilization to conclude with the Global Climate March on November 29.

By starting this campaign, the GCCM and its 200,000 supporters are actively responding to the just-released Appeal to COP21 Negotiating Parties addressed from the bishops to world leaders who will gather on November 30 for the Paris Climate Summit (COP21).

The Catholic Climate Petition already has over 200,000 signatures, which are being carried symbolically by Yeb Saño, former climate negotiator for the Philippines, from Rome to Paris through his People’s Pilgrimage. The petition signatures will be delivered to representatives of the French government (who preside the COP21) and of the United Nations on November 28, in an interfaith event in Paris.

The Month of Climate Action will work like a virtual pilgrimage, paralleling the fasts and People’s Pilgrimages that have been occurring around the world with those advocating for climate action and justice. The last stop of this virtual pilgrimage will be the Global Climate March on Sunday, November 29th, when over one million people will convene in over 3,000 cities to ask world leaders for action on climate justice. In Paris, upwards of 400,000 people will be marching in solidarity with those who most feel the effects of climate change.

Inspired by the action of the pilgrims walking towards Paris, CIDSE has also launched on 5 November the call to action “4 Steps for Planet”. More information are available on the dedicated website: http://www.fourstepsforplanet.org