Far more than 5000 pilgrims have already walked our pilgrim’s route which goes from the Danish-German border to Paris – why? Is it really worth walking almost 1500km in view of the latest terrible attacks in Paris? All our pilgrims agree: Yes, it is!

There is no way we are going to let these terrorists win and paralyze us. We have to keep walking for climate justice, raising the voices of people of faith and showing our unity in an interfaith manner, thus underlining that our Muslim sisters and brothers have nothing to do with those terrorists. Our pilgrims want to show solidarity with the refugees from Syria who are fleeing exactly from this army. The pilgrims are also aware that many more people will have to abandon their countries when the consequences of climate change add to such terrorist attacks or civil wars.
With this climate pilgrimage, the French and German pilgrims are a living example of how strong humans can be when walking and sticking together – all united for climate justice and peace. By passing by landscapes where the consequences of nature destruction can be seen or where thousands of people died due to passed battles, they can sense the importance of French-German friendship in order to fight these types of injustice and unnecessary deaths.
When walking from Metz to Mars-la-Tour in France, the pilgrims passed by the ancient border where Alsace-Moselle had been annexed from 1870 to 1918 and they visited the place of a horrific battle between France and Prussia in 1870.

The pilgrims visit not only examples of climate destruction or war but take also part in inspiring discussions on how future energy production could look like and how useful it would be for our planet to invest in ecological agriculture. The pilgrims have visited Slow Food Gardens and ecological farms where they were allowed to taste the difference between conventional food production and the one based on climate production. 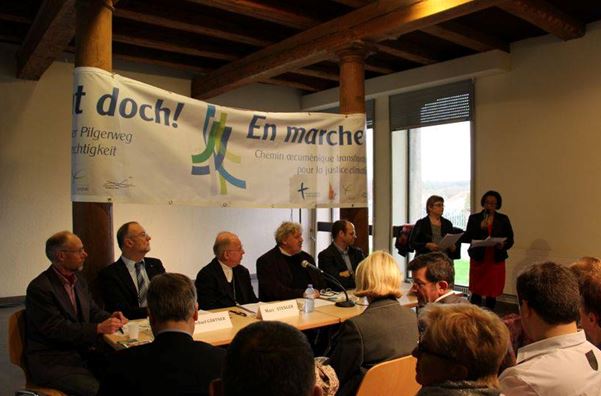 Discussion in Metz: “Christians and the climate – why do we move?”, with the bishop of Troyes, the President of Pax Christi France and many more.

Additionally to theoretic discussions on what has already been achieved in terms of nature protection and what more needs to be done, our pilgrims set an example with concrete actions. 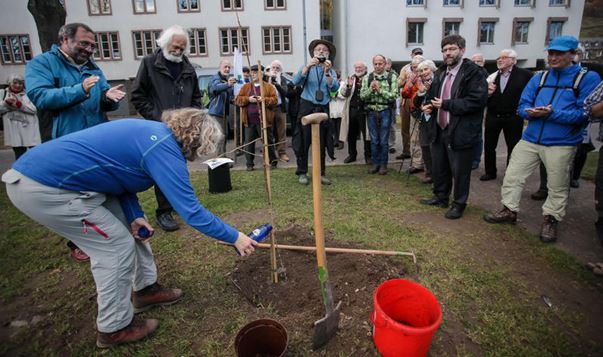 The pilgrims plant a Gingko tree and leave an artwork in Cochem, Germany in order to give weight to their demands. The picture shows Eva Katarina Agestam, the only Swedish pilgrim who has been walking all the way down from Sweden to Paris – she started in June!

The pilgrimage has not only a “climate” dimension but also a spiritual one. Prayers and meditation assure that our pilgrims’ group feels united with all the other faith-based activists, religious orders and normal citizens who are supporting spiritually and with concrete actions our goal of climate justice. A multilingual book with prayers and songs has been produced only for this Ecumenical Pilgrimage for Climate Justice. 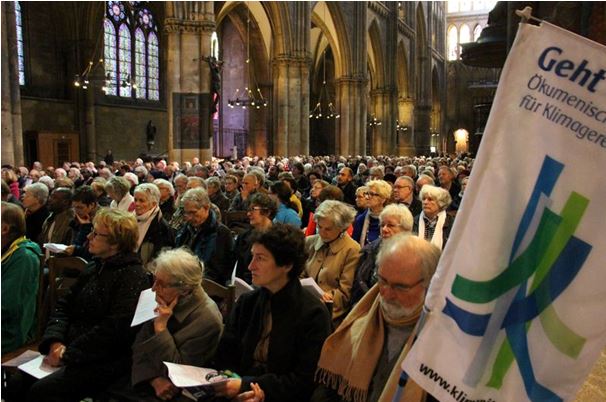 Service in the Cathedral of Metz, France

The pilgrims will continue their march to Paris despite the recent events. With their prayers, the pilgrims want to strengthen the Parisians who have lost their loved ones and now live in fear. They won’t give space to the terror which the IS wants to spread but keep walking – for our Creation, for our future generations and for the most vulnerable in the world who will be the most affected by the climate change.

Written by Daniela Bergmaier, coordinator of the Ecumenical Pilgrimage for Climate Justice