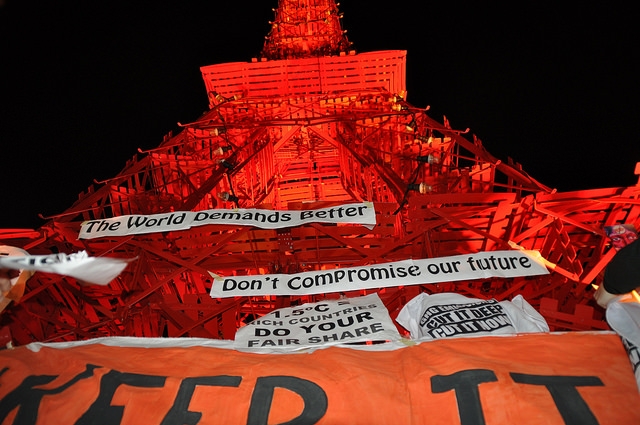 Yesterday evening a new text of the Paris agreement was released, and CIDSE, alliance of 17 Catholic development agencies, hopes that some key issues will still be addressed before the closing of the negotiations planned for tomorrow.

“We call for leaders, in the little time left, to do everything possible to make the agreement to listen to the voices of the world’s most vulnerable and not to leave them behind.” said Bernd Nilles, CIDSE Secretary General.
We are especially disappointed that on the Human Rights Day (celebrated yesterday for the 67th anniversary of the declaration of human rights) negotiators removed the protection of human rights from the core of the agreement. This risks that certain climate projects may endanger human rights and it marks a step back instead of enhancing the convention (UNFCCC).
The absence of any reference to the need to protect food security in the current text, while damaging language on food production remains, is a further major negative. Ensuring adequate food for the most vulnerable is an issue of access. This has been consistently stated by other UN bodies. Simply protecting production does not ensure food security or safeguard the right to sufficient food and rather leads to damaging increases in emissions.
Land is also treated in the text merely as a source to offset emissions and gives no consideration to people living on those lands and could therefore undermine people’s livelihoods and way of life. This gives big polluters a chance to grab lands to offset projects and displace indigenous communities, while reducing arable land and continuing to increasing emissions at home.
Countries are not providing any assurances on financing developing countries’ adaptation needs: this means that many poor and vulnerable communities who don’t have the resources to cope with their changing climate are now left to fend for themselves. Those with most responsibilities for causing climate change should provide their fair share, based on their historical responsibility and capacity to pay. It is time for rich countries to pay their ecological debt.
The hope is also that the Paris Agreement will give a clear, unequivocal signal to the world that the fossil fuel era is set to end. As it stands the current draft gives some certainty that we are on that path. Decarbonisation by 2050 and a shift to 100% renewables, as called for by the most vulnerable countries, would go further and provide the upmost clarity on our collective direction of travel.
We won’t settle with an agreement that doesn’t put the people first, and as the Pope said: “The urgent challenge to protect our common home includes a concern to bring the whole human family together to seek a sustainable and integral development, for we know things can change.” – Laudato Si’.
Contact: Valentina Pavarotti
CIDSE Media & Communication Officer
Mobile: +32 (0)491 39 54 75
pavarotti(at)cidse.org
Share this content on social media