European Development Days: A reflection of the ratios – CIDSE
Skip to content 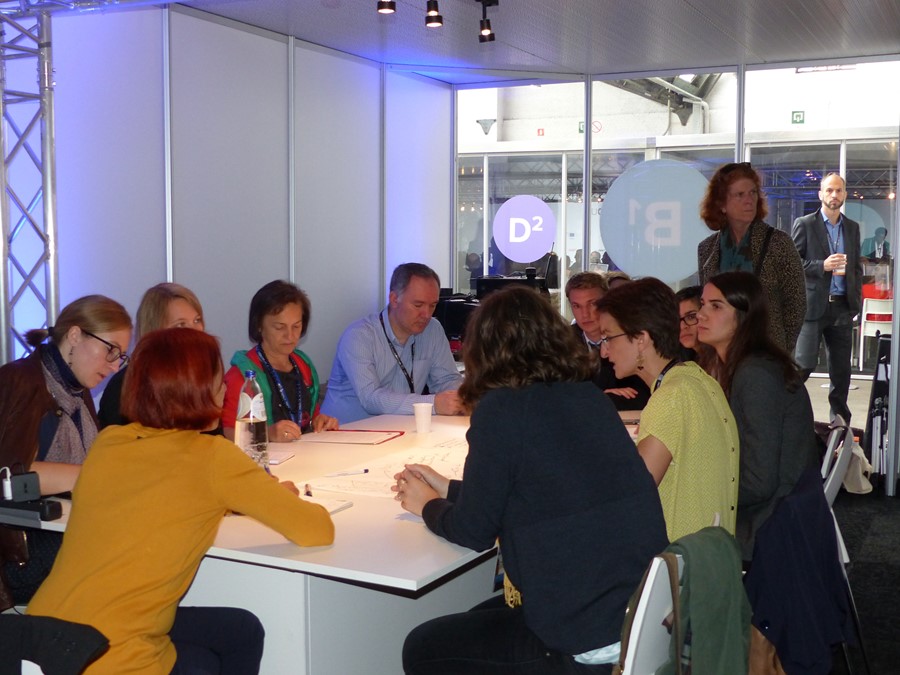 Together with some colleagues of Broederlijk Delen I took part in the European Development Days on June 15th. A conference organized by the European Commission on development and sustainability. This year the event happened in Tour & Taxis, Brussels, with lectures, workshops and information stands of dozens of organizations.

High level security
It is still early when we arrive at Tour & Taxis. The gray morning and the pouring rain don’t make it easy to receive the thousands of participants. We need to register underneath the white tents near the entrance. One of the collaborators has a hard time keeping the rain out and one of the desks has to be closed for a while.

Once we entered the building I get the feeling we are on an airport. Everything has to be scanned and we have to walk trough a metal detector. The rest of the registration is a real nightmare. I have to wait fifteen minutes in front of the desk while my badge is being printed. After three failed attempts the woman finally hands over my badge. It still says security instead of participant, but the woman smiles and tells me she will give a call when the Queen and Ban Ki-Moon arrive, so I can escort them.
Waste management and cooperative agriculture.

Together with Anthony and Terri I proceed to the room where CIDSE organizes the workshop about lifestyle. ‘Move towards sustainable lifestyles for the people and the planet’ says the projection. Before we start with the workshops, we see a short introduction movie. The emphasis lies on the small steps which everyone can take towards a better world. No sign of boring policy texts or inaccessible examples about changes at the highest levels. This is a brainstorm about what we can do, here and now.

Anthony De Proft is a lecturer at the Odisee university. His courses include environment- and waste management. The idea of his lecture is very old and in some incomprehensible way it disappeared from the minds of people over time. Waste management can be very simple: it’s the circle of life idea. Just like Mufasa told his son Simba in the Lion King: ‘When we die, we become the grass. The antelope eat the grass and we eat the antelope. So everyone has his place in the circle of life.’ It is the same story with waste. We need to become more aware of the possibilities to re-use and avoid waste.

Across the table sits Daisy Hermann of the ACRF organization, it only includes women and it strives for a more comprehensive cooperation between consumers and producers in agriculture. She tells how many times they have been laughed at by policy makers. But that they also have made a lot of progress in achieving their goals. The women try to make people understand that small-scale agriculture can be beneficial for everyone. The direct impact of this choice can have a lot of influence on the systemic change that everyone here is trying to achieve.

After the workshops every table sends a representative to the front of the room to give a short summary of what was discussed. We also get the chance to send one word to a wordcloud, that is being projected while the representatives speak. ‘Lessismore’, ‘Food’ and ‘Solidarity’ become the biggest words in the cloud. It is very clear that we agree on the ways we can achieve our goals.

Empty words on the highest level
After this workshop no less than twelve speakers open the conference officially. Unfortunately we can only watch these people on a big screen in an adjacent room. While we try to keep our sweat to ourselves underneath the red hot spots, Federica Mogherini, vice-president of the European Commission, kicks off. Her speech is full of good intentions, but I can’t help but thinking this a mandatory way of doing things. ‘The problems of our neighbours are our problems. The stability of our neighbours is our stability.’ It all sounds really nice, but I have a hard time believing her.

Also the Secretary-General of the United Nations Ban Ki-Moon, gets a chance to motivate the participants. But he also fails the way I see it. He brings some shallow, positive points to the fore. That only make our attention fade away. We decide to leave the room early and head to the foodtrucks.

The initiative seems like a worthy attempt at first sight. But I keep wondering how the gap between the levels can be closed. If you just look at the way this event has been organized, you see an old hierarchical system which is hugely outdated. Besides that it is very noteworthy how at a conference on development and sustainability consumption and waste is handled. The entire room is really hot and everywhere you look you can see plastic cups and wrappings. If the EU really wants to stand for a drastic change, I suggest they start by rethinking the way they organize events like this one. Or are the problems of our neighbours not as important as Mogherini claimed?