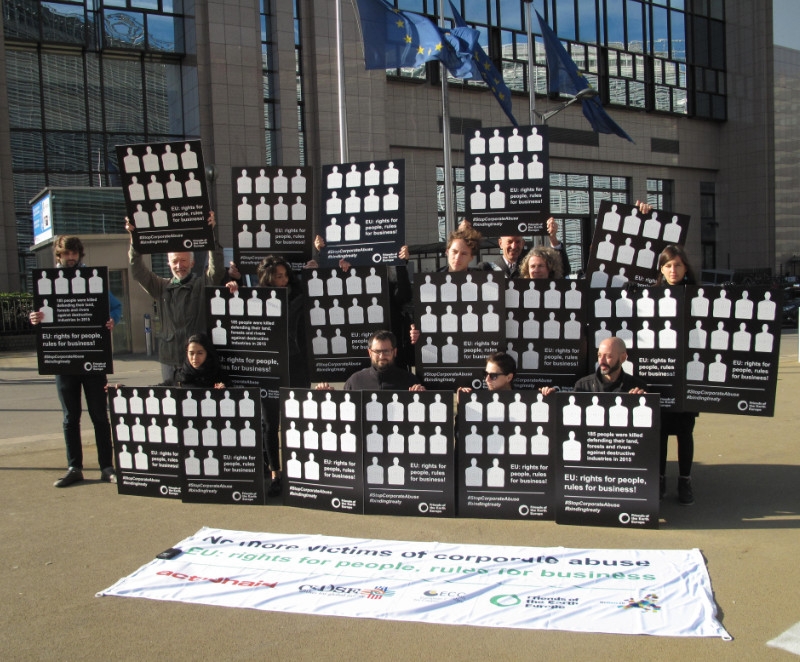 CIDSE supports the petition promoted by Friends of the Earth.

Today (Thursday, 13 October 2016) from 11:30-12:00, people dressed in black held 185 silhouettes with targets on them representing the deaths and threats suffered by those defending their communities against companies that abuse their human rights. The stunt took place outside the European Council, Justus Lipsius building, Rue de la Loi 175, 1000 Bruxelles.

90.000 citizens called on the European Union to support a binding treaty on businesses and human rights today, and to participate in international discussion on the issue in Geneva on 24 October [1].

The UN Human Rights Council (UNHRC), meeting this month, is developing a set of legally-binding rules for transnational corporations and other business enterprises in relation to human rights known as “the UN treaty”. This treaty could protect people from human rights abuses by corporations and bring corporate actors to justice, according to the organisations.

Outside of Europe more than three people were killed a week in 2015 defending their land, forests and rivers against destructive industries and corporations. 185 known deaths, by far the highest annual death toll on record and a 59% increase from 2014. This trend has continued into 2016. The European Union has an unprecedented opportunity to put human rights before investor rights by participating in discussions around a ‘UN Treaty’, according to the organisations.

[1] Friends of the Earth Europe and allies handed over a petition to the European Commission calling on the European Union to participate in the UN Treaty discussions this month in Geneva (starting 24 October) – to ensure rights for people, and binding rules for business.