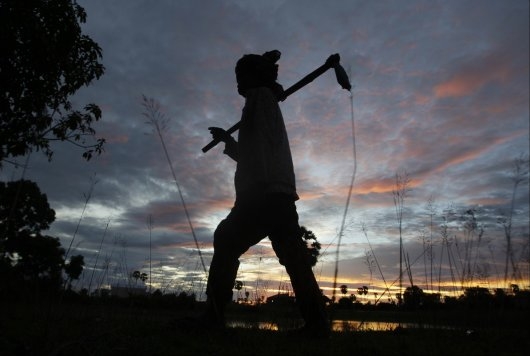 Less than a year ago the Paris agreement on climate change was signed. I followed the negotiations closely, and when leaving Paris I felt both a sense of optimism and worry. States are now confronted with the urgent need to put this agreement into place, since a climate crisis is already upon us.

This article was originally published on Equal Times and is also available in French and Spanish.

To mitigate climate change and to adapt to its consequences we must urgently address the connections between climate, agriculture, and food systems. On 16 October we will celebrate World Food Day and its key message: “Climate is changing. Food and agriculture must too.” But the way our food systems are currently designed is actually exacerbating the climate problem.

The agricultural sector is responsible for a huge share of the world’s greenhouse gas emissions (Editor’s note: 30 per cent according to 2014 figures from the UN IPCC). The monocultures that dominate current farming systems not only contribute to these emissions but also make people more vulnerable to shocks: the promotion of monocrop systems risk devastating yield losses in the face of climate disasters. A vicious and deadly circle.

Agribusiness is also in many ways weakening the fabric of rural communities. A strong community is a prerequisite for adapting and reacting to climate change. The conventional agribusiness sector does not ensure the right to food for many people since it is serving the world’s markets. It limits the access of people and small-scale farmers to crops, limiting their self-reliance.

While the agribusiness model may be capable of producing large volumes of food, we know that more food is not the same as less hunger. Hunger must be addressed by ensuring that the farmers have access to resources like land and seeds, and that they have access to markets.

CIDSE (Coopération Internationale pour le Développement et la Solidarité, or International Cooperation for Development and Solidarity), an international alliance of Catholic development agencies working together for global justice, recently brought together farmers and organisations in a workshop to look at what people from all over the world are doing on the ground. These testimonies showed that many great local food initiatives are achieving incredible things with much smaller support compared to that going to conventional agriculture.

Amongst them: revitalising unproductive soils, breeding new and more resistant and adaptable crops, rekindling our relationship with nature and with other citizens, creating meaningful employment and using urban spaces in creative and efficient ways.

These examples and the agroecological principles underpinning them represent the way forward for our food systems, and more generally for our societies as we strive to address the climate challenge. Agroecological practices based on local knowledge, diversification, the respect of nature, and on the strengthening of communities leverages the power to fight climate change – already with very tangible results.

Agroecology is not just about changing farming practices: it instigates social change, builds more closely-knit communities and creates spaces for challenging barriers like patriarchal values. In many communities adopting agroecological approaches, opportunities were created for women to get together, achieve more equal land rights, share knowledge and rely on a tighter support net.

While I know that a drastic shift needs to happen fast, I am also conscious of the many false solutions that are being pushed forward, and that we should restrain from supporting even though we feel the need to act.

September marked the second anniversary of the Global Alliance for Climate Smart Agriculture (GACSA). According to the Food and Agriculture Organization of the United Nations (FAO): “Climate-smart agriculture promotes production systems that sustainably increase productivity, resilience (adaptation), reduces/removes GHGs [greenhouse gases] (mitigation), and enhances achievement of national food security and development goals”. Although it might sound promising, at CIDSE we believe that there are serious problems in connection to this.

There is no clear definition of what is and is not ‘smart’, there are no social or environmental safeguards, and there is no accountability to ensure that the companies investing in climate-smart agriculture actually reduce their environmental footprint. Also, climate-smart agriculture takes the attention away from people’s practices that already exist and that work.

My belief, taking inspiration from the Pope’s encyclical Laudato Si’, is that all the challenges we are facing are interlinked, and that we cannot consider solutions that do not take into account the overall well-being of people. The prerequisite for future strategies to solve the climate and food crisis should be a just social system, where all community members can flourish.

In this sense, climate change is actually helping us to understand these linkages: it is highlighting that something is not working for the people and the planet, it is pointing at a social justice concern. Changing food systems is therefore not only a technical question – it is also a power struggle. To promote people’s solutions we must give them the power to keep on using, developing and scaling up these initiatives.

But the global picture doesn’t look encouraging. Only shortly after the announcement of the mergers of DuPont-Dow and Syngenta-ChemChina, the recently announced Monsanto-Bayer merger is completing the picture of an increasingly consolidated agribusiness sector, with three companies dominating the seeds and pesticides markets. Amongst the problems this may bring is the increasing lobbying power of these firms to promote approaches such as ‘climate-smart agriculture’ and define these terms in line with their own interests.

As George Dixon from the International Federation of Rural Adult Catholic Movements said during our workshop: “In many parts of the world governments don’t listen to the farmers. But when corporations talk about climate-smart agriculture, governments listen!”

Despite this sobering scenario we should find hope in the people’s solutions at the forefront of the climate change fight. We should support them, knowing them they are the basis for a just world, a world which is equipped to react and adapt to the biggest challenges.