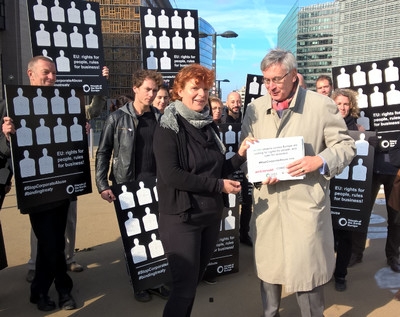 CIDSE will attend the second session of the open-ended intergovernmental working group on transnational corporations and other business enterprises with respect to human rights (IGWG), taking place in Geneva from 24-28 October 2016.

So far, while international law has defined the duties of states to protect human rights, it has not explored enough the responsibility of corporations for their human rights violations. A turning point has been reached on 25 June 2014, when the UN Human Rights Council in Geneva adopted a resolution on the elaboration of an international legally binding instrument on transnational corporations and other business enterprises with respect to human rights, also referred to as “UN Treaty”.

The UN Resolution called for the establishment of an Intergovernmental Working Group (IGWG) with the mandate to elaborate the Treaty. Following its first session, the open-ended intergovernmental working group presented its report to the Council. The second session will take place from 24-28 October 2016 in Geneva, and it will be dedicated to conducting constructive deliberations on the content, scope, nature and form of the future international instrument.

CIDSE’s position in respect to the session and the process
CSOs including CIDSE are seeking ways for the Treaty to be people-centered, from allowing preventive measures such as the engagement of affected people in impact assessments, to defining companies responsibilities, direct and indirect obligations for companies, principles for corporate group liability, and ultimately, criminal liability for serious human rights violations.

Specifically for this session, CIDSE answered to the call for submissions with a joint submission with Friends of the Earth Europe, SOMO, Brot für die Welt and IBFAN-GIFA. The submission focuses on three core elements of a future treaty: access to remedy, effective enforcement mechanisms, and the Treaty and the trade & investment regime. The analysis and proposals are based on a seminar report with legal experts, advocates of affected communities and European NGOs within the Treaty Alliance, where different options were presented and discussed. See also oral statement.

CIDSE’s activities in the run-up to the session
On 12 October, CIDSE co-organized an expert meeting on the Treaty in Brussels, together with Friends of the Earth Europe, SOMO, Brot für die Welt, FIDH and ECCJ, in order to facilitate a dialogue between EU decision makers, legal experts and NGOs on the content of the Treaty, particularly on the scope of enterprises covered as well as on the above-mentioned issues addressed in our submission. CIDSE earlier co-organized a session at the EU Presidency Conference on the complementarity of the Treaty with the UN Guiding Principles on Business & Human Rights.

On 13 October, over 90.000 signatures were delivered in France, the Netherlands, the UK, and in Brussels from a petition calling on the EU to support the UN treaty process and participate in good faith at the upcoming IGWG session. In Brussels, against a backdrop of placards representing the 185 human rights defenders killed last year when defending their forest, land and rivers, the signatures were presented to Mr. Ben Smulders, head of cabinet of EU Commission Vice-President Timmermans. This initiative of Friends of the Earth Europe was supported by CIDSE and several other organizations.

Furthermore, CIDSE and its members are actively engaged in national debates on Business and Human Rights Action Plans based on the UN Guiding Principles, in countries including Austria, Belgium, France, Germany, Ireland, Italy, Switzerland and the UK, and working with its partners to monitor and evaluate the situation on the ground.

Activities in Geneva by CIDSE members and partners
Representatives from the CIDSE secretariat will attend the session together with its members CAFOD and CCFD-Terre Solidaire.

You are invited to joint the following event:

The events organized by the Treaty Alliance can be found here. These include a gathering with the press on Monday 24th October from 3:30pm to 4:30pm