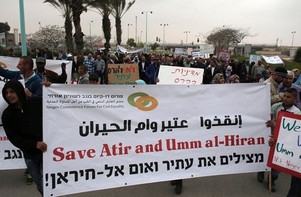 EuroMed Rights and CIDSE strongly denounce the State of Israel’s plans to demolish the Bedouin village of Umm al-Hiran in the Naqab (Negev) in the south of the country.

The Israel Land Authority (ILA) announced at the beginning of the week that homes and structures in the Bedouin village would be demolished on Tuesday 22 November; this did not occur, due to a decision by the police, according to the ILA. However, the demolition of the village is imminent and could happen at any time. These demolitions could lead to the displacement of the roughly 500 residents of Umm al-Hiran and are likely to foreshadow similar moves impacting the more than 70,000 inhabitants of unrecognised Bedouin villages in the Naqab.

Disturbingly, the residents of Umm al-Hiran are being displaced for the sole purpose of building a Jewish town called “Hiran” over its ruins. Indeed, in a 2015 ruling, the Israeli Supreme Court recognised that residents of the village were not illegally trespassing on the land– as initially claimed by the state – but were in fact moved there by military order in 1956.

This decision testifies to the deep-rooted and institutionalised discrimination against Palestinian citizens of Israel, including the Bedouin, and mirrors the Israeli government’s policies of forcible transfer of Bedouin communities in the West Bank.

The EU has on numerous occasions encouraged Israel to ensure the equality of all its citizens and to seek a fair solution to unrecognised Bedouin villages in consultation with the affected Bedouin communities.

The EU should publicly call on Israel to halts its plans to demolish Atir-Umm al-Hiran, as well as the other Bedouin villages in the Naqab, and to dispossess and displace their residents.