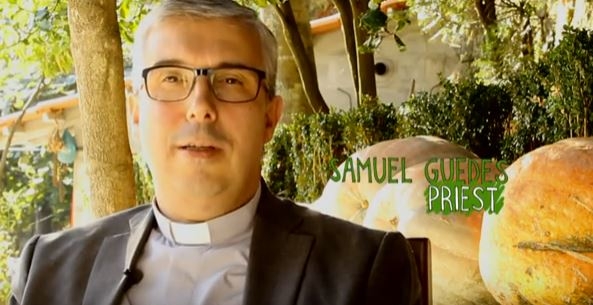 Unemployement and economic instability became widespread for families in Portugal in the aftermath of the 2008 economic crisis. Yet this was not a reason for dispair for Father Samuel Guedes, who decided to take action. He created three social solidarity institutions and a catering social business that sources sustainble and organic products from its own farm. Not only does the project generate employment, but it does so in a way that it respects both people’s dignity and the environment.

Samuel Guedes, before being ordained priest, had already worked in the General Secretariat of the Diocese of Porto and was also the Notary of the Ecclesiastical Court. He was ordained priest in July 1994. At the same time he was appointed parish priest of Ferreira and Frazão, of Paços de Ferreira, and shortly afterwards of Arreigada too, from the same county, where he remains today.

Fr. Samuel stands out for his social activity, having built and recovered several social and parish centers, churches and chapels, serving his communities. It’s after accepting the offer of an hectare and a half farm that Fr. Samuel most surprises us. While the project of the construction of a nursing home for the elderly was studied, he used the farm to produce, not only agricultural products but also animal products, for the maintenance of the three social centers and parishes. It turned out to be much more than a short term alternative and an inspiration for what was coming.

In the fraught crisis of 2008, Father Samuel Guedes did not despair. He founded three IPSS (Particular Institution of Social Solidarity) and created a catering company “Engenho dos Paladares, Lda”. It was just a little step. That’s how he tried to solve most of the challenges of his communities. This social entreprise was created not only to give sustainability to the entities who support small communities and who fight the flagrant social problems, and to keep the main activities of each center, but also to respond to unemployment, especially the long-term one. With the growth of this social business, the “Paladares Paroquiais” brand was born. It was inspired on the handmade manufacture of a hundred per cent natural products – without dyes nor preservatives, such a cookies, traditional biscuits, conserves, liqueurs and jams, etc. Later, they also explored and started to produce dairy products, now producing various types of cow milk and cheese.

The project excels for his innovation and creativity, with an increasingly wide range of products, from a huge variety of biscuits to herbal or ham cheeses, for example. You can learn more at: http://www.paladaresparoquiais.net/

As it grew, it was possible to pay off the initial investment, it has ensured a sustainable growth of the economy along with the support to more and more social projects. It also supports primary schools, four nursing homes for elderly people and a social canteen, in addition to the IPSS. Four years later, the Paladares Paroquias, combine more than a thousand people in a rich ecosystem, among workers, seniors, children and others in need.

Fr. Samuel and his story have inspired IPSSs all over the country to create their own businesses in order to ensure sustainability of their projects. And everyone who’s in touch with this article and story is challenged to look at a crisis like an opportunity to change his life to something better, to take advantage of his own resources and circumstances and never to limit oneself.

Watch the video below: