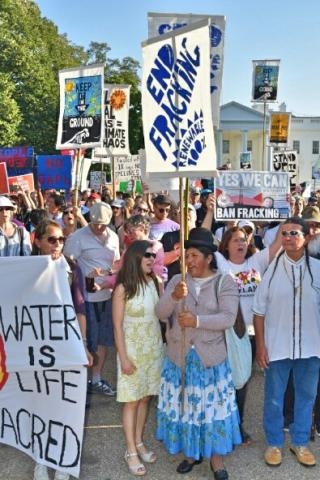 Maryknoll Sister Patricia Ryan and members of the indigenous community where she works in Peru came to Washington, D.C. in September to pursue legal efforts to stop a mining company from polluting their sacred land and water. At the same time, Native American Sioux Indians from Standing Rock Reservation in North Dakota were leading demonstrations in front of the White House with a very similar goal.

The following article was published in the November-December 2016 issue of NewsNote by the Maryknoll Office for Global Concerns.

Again and again, hundreds of people, many of them Native American Indians, chanted in unison outside the White House. They had come to protest the construction of an oil pipeline on the Standing Rock Reservation in North Dakota because of the devastation a potential oil spill would cause to the soil and water.

In the crowd was Yolanda Flores, a 45-year old Aymara indigenous woman who works as a secretary in the impoverished altiplano (“high plains”) of Puno, Peru, where companies mining for silver, lead, copper and other minerals have devastated the soil and water that her people have revered as sacred for thousands of years.

Yolanda was impossible to miss in her traditional Aymara dress: Her long hair plaited into two dark braids gathered at the end by a black tassel, a many-layered floral skirt, a sweater to ward off chilly Peruvian mountain air not present in late summer in Washington, D.C., and a bowler hat.

How Yolanda came to be in Washington, D.C. and why she supports this cause of the Sioux indigenous peoples in North Dakota – a place she has never been – is a story crafted over more than seventy years with accompaniment, service, and advocacy by Maryknoll missioners.

Yolanda grew up as the daughter of peasant farmers in Puno, a cold, remote highland region in southern Peru notorious for its difficult living conditions. Since her parents were children, Maryknoll missioners have been actively involved in the Catholic Church and community life in Puno and throughout Peru.

In their desire to promote the culture of the people they served, Maryknoll missioners established the Institute of Aymara Studies in 1974. The Aymara culture teaches that a sacred and spiritual connection exists between the Aymara people and the land and water.

“Water is life and cannot be privatized,” explains Benecio Quispe Gutiérrez, an Aymara intellectual and activist, quoted by Jeffery Weber in his book Red October. “They cannot privatize water, llamas, sheep, cows, and trees. We need them all.”

The Aymara peoples include their traditional reverence for Mother Earth in their Catholic faith life. They make offerings to Mother Earth in gratitude for a good harvest and good health.

“For [indigenous communities],” Pope Francis writes in Laudato Si’, “land is not a commodity but rather a gift from God and from their ancestors who rest there, a sacred space with which they need to interact if they are to maintain their identity and values. When they remain on their land, they themselves care for it best.”

Unfortunately, rapid and uneven economic development, coupled with longstanding racial and social inequalities, has often made the Aymara peoples vulnerable to exploitation by the government and by national and international private corporations, particularly in the mining industry, which is the country’s largest export industry.

Where Yolanda lives, the land is rich with silver, lead, and copper. Over the years, mines have polluted the soil with heavy metals and cut off many-decades-old sacred communal wells from their farms. In 2008, Yolanda witnessed her neighbors’ frustration overflow into violence when Canadian Bear Creek Mining Corporation received a permit to build a mine on Aymara land through what many of the people believed to be duplicitous behavior and false claims, then failed to attend a public meeting where hundreds of community members hoped to have their questions answered. Some people destroyed one of the mining company’s empty buildings.

But violence is not the way of the Aymara peoples. The Aymara culture teaches a social obligation to help other members of the community. An Aymara peasant might ask a neighbor for help building a house, digging an irrigation ditch, or harvesting a field. In return, he or she is expected to donate the same number of days’ labor to the neighbor. Mutual aid and care for the common good supports right relationships between the Aymara peoples and between each person and the land and water.

There was another meeting in 2011. More than a thousand people came but the meeting space could only accommodate 200. This time company representatives did attend but they offered information about the mine in technical terms that few people understood and in Spanish rather than the Aymara language. They also said they would only accept inquiries in written form. Since Aymara is a spoken rather than written language, this was seen by many as yet another tactic by the company to obstruct their right to refuse the concession.

With the accompaniment of Maryknoll Sister Patricia “Pat” Ryan, the Aymara people embarked on a massive campaign of nonviolent resistance. More than 15,000 indigenous peoples blocked roads in and around Puno for nearly six months. “There were strikes on the border with Bolivia,” Sister Pat recalled. “When they weren’t heard there they came in closer to Puno until eventually they closed the road all the way from the border with Bolivia to the city of Puno, which is about 150 kilometers. Everything was immobilized: The markets closed; there was no transportation; tourism was shut down. They were trying to get their voices heard about this mine being allowed into their area without their consent and without their full knowledge of what this would mean for their lives.”

The government, faced with the possibility of more demonstrations and more lawsuits, took a surprising step – it revoked the mining company’s permit and shut down construction of the mine.

“Being an indigenous woman from a remote area,” Yolanda said, “I always thought that the world was tiny: you grow up, you get married, you have a family, and you work the fields until you die.” . . . “Meeting Maryknoll Sisters and Fathers and Brothers helped me to go further. I work on issues I never thought I could, like protecting Aymara people’s human rights and the care of the environment.”

Yolanda works for the Association of Human Rights and the Environment (Derechos Humanos y Medioambiente), or DHUMA. This nonprofit was formed in 2007 after the closure of the Vicariate of Solidarity of the Prelature of Juli, which was founded by the Maryknoll Fathers and Brothers, to carry on the work of defending the rights of impoverished and marginalized people and to create a climate of peace in the region. At that time, in a highly controversial decision, the newly-appointed Bishop Jose Maria Ortega Trinidad instructed all Maryknoll Fathers and Brothers to leave the diocese of Juli after 65 years of service. In a public letter signed by more than 1,000 people, the parishioners of Juli said “The Maryknoll Fathers will never be far from our hearts or out of our memories and this we want to express publicly to the world and to the whole Church.”

“I feel the spirit of Maryknoll Sisters and Fathers in the daily struggles of our Aymara communities,” said Cristobal Yugra, an Aymara indigenous man and lawyer at DHUMA who traveled to Washington, D.C. with Yolanda and Maryknoll Sister Patricia ‘Pat’ Ryan. Together they offer educational services, information and legal advice to local communities impacted by mining.

Yolanda, Cristobal, and Sister Pat came to D.C. from Peru at the invitation of an international court established within the World Bank to arbitrate grievances concerning trade deals. The court was hearing a case brought by Bear Creek Mining Corporation against the government of Peru after the government revoked the company’s mining permit in Puno.

The company is suing Peru for $522 million in future expected lost profits not just from their initial silver mine but also from a second mine they had planned to develop with the profits from the first mine.

The court accepted DHUMA’s amicus brief which refutes many of the company’s arguments. “We’re trying to make known what really happened in the area according to the Aymara peoples’ perspective,” Sister Pat said.

This is the first time that the Maryknoll Office for Global Concerns is aware of this controversial international court not only accepted a brief written by community members, but also invited them to attend the hearings in order to call on them to respond immediately to requests for additional evidence. It may also be the first time that the court hearings were livestreamed.

It was on their one day off from the week-long court hearings that they joined the Dakota Access Pipeline protest. It was a remarkable moment to have indigenous Aymara peoples from Peru join indigenous American Indians as water defenders and protectors of Mother Earth.

Photo: Yolanda Flores holds a “End Fracking” sign outside of the White House on September 14, 2016. Also pictured is Chloe Schwabe (left of Yolanda), of the Maryknoll Office for Global Concerns.