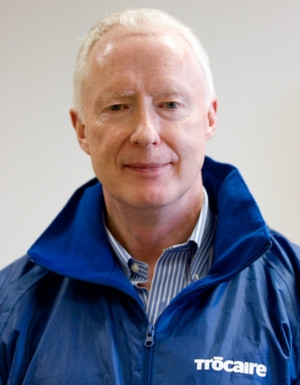 The CIDSE Board of Directors has elected Éamonn Meehan, Executive Director of the Irish Catholic international development agency Trócaire, as its new President. The election took place today, during the board’s annual meeting.

Brussels, January 26th, 2017 – Mr. Meehan has been elected to a three-year mandate and is succeeding outgoing President Heinz Hödl, Director of KOO, the office of the Austrian Catholic Bishops’ Conference for International Development. Mr. Meehan has been a member of the Board’s Executive Committee since 2014 and brings 30 years of experience in international development and global justice to his new role.

“Since its foundation over 50 years ago, CIDSE has always remained true to the call to challenge global structural injustices in order to improve the lives of the world’s poorest people. With inequality increasing, climate change rapidly advancing and war and displacement destroying the lives of millions, this challenge is even more urgent today. As President of CIDSE, I am committed to building on the work of the network and contributing to the change our world so badly needs”, said Mr. Meehan upon his election.

The Board of Directors thanked Mr. Hödl for his commitment over the last three years. During his time as President, the organisation worked diligently on the Paris Climate Agreement, contributed towards new global frameworks for sustainable development and finance for development, advocated for strong EU legislation on conflict minerals and developed a new strategic framework entitled, “Acting for Transformation for a Just and Sustainable World”.

“There was a kairos moment during my time as President: Pope Francis’ encyclical ‘Laudato Si’. It was a highlight for CIDSE and myself to be a kind of ‘megaphone’ for the Holy Father’s messages towards people, church leaders and political decision makers. I wish my successor all the best and God’s blessings”, said Mr. Hödl, who continues as Director of KOO.

Mr. Meehan enters into his mandate as CIDSE begins to implement its new strategic framework, which will run until 2021.

“CIDSE looks forward to the presidency of Éamonn Meehan. His experience will help the CIDSE alliance to further unite in its efforts and strategies to promote greater societal and economic transformation and to bring positive changes by putting the struggles of frontline communities at the centre of our work”, said Bernd Nilles, Secretary General of CIDSE.

The Board also welcomed Cardinal Peter Turkson, Prefect of the new Dicastery for Promoting Integral Human Development, and Mr. Stefano Manservisi, Director-General of DG DEVCO, as special guests to discuss bringing forth the vision presented in Pope Francis’ encyclical “Laudato Si’: On Care for our Common Home”, and the implementation of the Paris Climate Agreement and the UN Sustainable Development Goals.

On the occasion of the farewell of Heinz Hödl, Cardinal Turkson thanked the CIDSE leadership for the work achieved over the last years, the collaboration with the Holy See to care for our common home and the support to the local Churches in the different continents to enable all human beings to live a dignified life.

CIDSE is an international family of Catholic social justice organisations, working together to promote justice, harness the power of global solidarity and create transformational change to end poverty and inequalities. www.cidse.org

The Board of Directors of CIDSE is meeting from January 25-27th, 2017 in Leuven, Belgium. The board is formed of directors from CIDSE’s 17 Member Organisations of Catholic international development agencies from across Europe and North America. Collectively, they work in over 120 countries in the Global South supporting local communities in their own development and campaign in their home countries for greater global justice.

Trócaire was established in 1973 by the Bishops of Ireland to respond to poverty and injustice in the developing world. www.trocaire.org

Short biography of Éamonn Meehan:Originally from Kilmaley, County Clare, Ireland.Former teacher and holds a Masters of Education from Trinity College, Dublin.Worked with the Agency for Personal Overseas Development in Lesotho from 1987-1991. Joined Trócaire in 1991 as Programme Manager for the Southern Africa Region and in 2002 became Deputy Director and Head of Trócaire’s Ireland Division.He has been Executive Director of Trócaire since 2013.

“In our own lives we must take responsibility for our own actions and those of our wealthy societies. Sustainability and equity begins with the acceptance of this responsibility and opening our hearts and minds to change.”

“CIDSE’s work is founded on Gospel values and the Church’s social teaching and has been renewed and energised by the work of Pope Francis.”