On anniversary of Laudato Si’, bishops of Mozambique call for respect of land rights – CIDSE
Skip to content 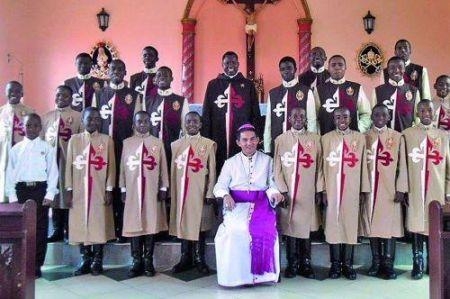 To mark the second anniversary of Pope Francis’ encyclical Laudato Si’, the Bishops’ Conference of Mozambique has issued a pastoral letter that appeals to social, religious, economic and political actors to care for our common home and seek together what is best for their country and those who inhabit it.

The pastoral letter specifically addresses land grabbing in Mozambique, which is displacing small family farmers from their land and depriving them from the ability to grow food to feed their families and communities. “This issue” it remarks, “is aggravated by the overarching ambition for agrarianism, extraction and processing of mineral resources, agro-business, biofuels, and the implementation of mega-projects that are often unclear in their real intentions.”

The letter notes that an estimated 56 million hectares of African land were sold or handed over to foreigners between 2000 and 2013, demonstrating that “enterprises and governments of industrialised countries are seeking in Africa the solution to the global energy and food crisis of their own countries and not necessarily seeking to help solve the problems of Africa or Mozambicans. In fact, as Pope Francis warns, countries of the Northern Hemisphere should rather be paying an ‘ecological debt’ to countries of the Southern Hemisphere”.

According to the National Bank of Mozambique, in 2013 the country was the third most coveted destination of direct foreign investment in Africa. These investments, which are supported by entities such as the World Bank and the New Alliance for Food and Nutrition Security of the G8, include the purchase of 535, 539 hectares for agribusiness projects and 40 percent of the country’s arable land for biofuel crops.

The letter also elaborates on how mega-projects are causing land conflicts, despite the legal recognition of customary land laws that could prevent the stripping and takeover of land. These laws are in large part ignored and not implemented to the benefit of investors. The bishops express concern over the fact that local communities are being forced to abandon their lands and peasants are pushed into industrial agriculture under the false promise of stable employment and higher yields. “… The product of the agro-business does not have the capacity to supply the local population but is for export, so the peasant is without land, without work and without food, which he must then buy at the import price,” write the bishops.

In light of this situation, the letter calls on the Assembly of the Republic and other legislative bodies to create laws that impede foreigners and multinational companies from accessing land, and to prioritise local communities.

The bishops point to Pope Francis’ critique of the neoliberal economic system and its promotion of consumerism, emphasizing that this model profoundly offends the culture and traditions of the Mozambican people who have a relationship with the land that goes beyond the view of its use simply for profit. “Massive consumption”, they say, “means mass production, and mass production means rapid depletion of nonrenewable natural resources”. This violates the vital relationship that people have with the land, which connects them to their ancestors and nature, and is a guarantee of life for their families and communities.

The bishops warn that what is at stake in Mozambique is the missed opportunity to promote an integral ecology and put in place a model of development that is inclusive and respects all, especially the most vulnerable who lack information about their rights, the economic power to develop alternative solutions, and must have their voices heard.

“In short, the problem of land is not an isolated problem or restricted to the economic aspect. It is a social, cultural and religious matter. We cannot work for peace without taking care of nature and social justice. We cannot get used to seeing how decent work is destroyed, families are evicted, peasants are pushed aside and nature is abused. For this reason, as Pope Francis said at the meeting with popular movements, we must work towards a human alternative to the globalization of indifference and put in place an economy at the service of the people, build peace and justice and defend Mother Earth”.

In 2025, Mozambique will celebrate 50 years of independence, and the bishops note that the best way for this event to be celebrated in peace and fraternity is by introducing an agrarian reform to correct the negative impacts of the current economic and agrarian policies, and that addresses the complexities of the socio-environmental crisis.

Finally, the letter calls on all citizens of Mozambique to care for our common home by accepting the responsibility we have towards one another, to take action in our personal, social, economic and political lives to defend land rights and to not accept a model of development that privileges profit to the detriment of human dignity.

“We must not accept a society whose economy is centered on the idolatry of money. Let us not collaborate with an economy that kills. Let’s try to consume the local produce produced by our farmers, by our neighbors. We should not accept a consumerist lifestyle model. We must not accept and assist the massive destruction of the flowers, plants and animals.”

It is a message that extends to us all, and on this anniversary of Laudato Si’ we must take concrete steps to ensure that land grabs and other injustices against the Earth and its people cease, and that all, including future generations, can live in harmony with nature.

See below in attachment the full pastoral letter (available in Portuguese and English).