CIDSE is advocating for a UN Treaty as a key instrument to protect human rights around the world. As part of its commitment, CIDSE will attend the third session of the open-ended intergovernmental working group on transnational corporations and other business enterprises with respect to human rights (IGWG), taking place in Geneva from 23 to 27 October 2017. This will be a decisive week for the UN Treaty: follow CIDSE on Facebook and Twitter for updates from Geneva, stay informed and engage with us!

So far, while international law has defined the duties of states to protect human rights, it has not regulated enough the responsibility of corporations for their human rights violations. A turning point was reached on 25 June 2014, when the UN Human Rights Council in Geneva adopted a resolution on the elaboration of an international legally binding instrument on transnational corporations and other business enterprises with respect to human rights, also referred to as “UN Treaty”.

The UN Resolution called for the establishment of an Intergovernmental Working Group (IGWG) with the mandate to elaborate the Treaty. Following the two first session held in 2015 and 2016, the open-ended intergovernmental working group will now meet for a first round of negotiations on the draft elements presented by the Chair of IGWG. After open deliberations on the Treaty, States will now begin negotiating on the content.

CIDSE’s position towards the Treaty
The elements reflect the high-quality, substantive discussions of the first and second IGWG sessions, building upon an open and credible process. Together with European NGOs we also published this statement on the publication of the elements.

There is growing momentum for the UN Treaty across many sections of society. From 20 States voting for the 2014 resolution establishing the Treaty process, some 80 States participated in the 2016 IGWG session. For the 3rd session beginning on 23 October, all States should come prepared to negotiate the content of the Treaty, considering carefully the potential of the elements and their effective implementation to put a stop to corporate-related human rights abuses.

Drawing from our positions to date, our studies, and our work within the Treaty Alliance, we will advocate for an instrument which can respond to strong demand from communities on the ground. Urgent international action is needed to tackle the flagrant imbalances in power between transnational corporations and people and ensure protection of human rights.

Statements
See below the following statements:

Why do we need a binding Treaty to protect business and human rights? CIDSE’s partners from Peru, Guatemala, Colombia, Brazil, the Democratic Republic of the Congo share their testimonies. 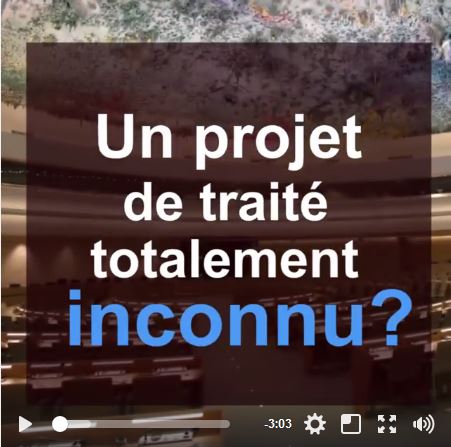 Activities in Geneva by CIDSE members and partners
Representatives from the CIDSE secretariat will attend the session together with its members CAFOD; CCFD-Terre Solidaire; Entraide & Fraternité; Fastenopfer and Misereor.

CIDSE will co-organize two side events in Geneva:

(See in attachment below flyer invitations)

After the IGWG session in Geneva, CIDSE will co-organize a panel debate with Pax Christi International and COMECE on “Extractives in Latin America: Which are the responses at the grassroots, EU & international levels?”, which will be an occasion to feedback on the Treaty negotiations. (See the flyer attached)

A second event will take place on 20 November in Brussels, co-organized with the Development and Peace Foundation (sef:): “Is the window of opportunity still open? State of the negotiations on a UN Treaty on Business and Human Rights.”

Report from first day of negotiations on the UN Binding Treaty