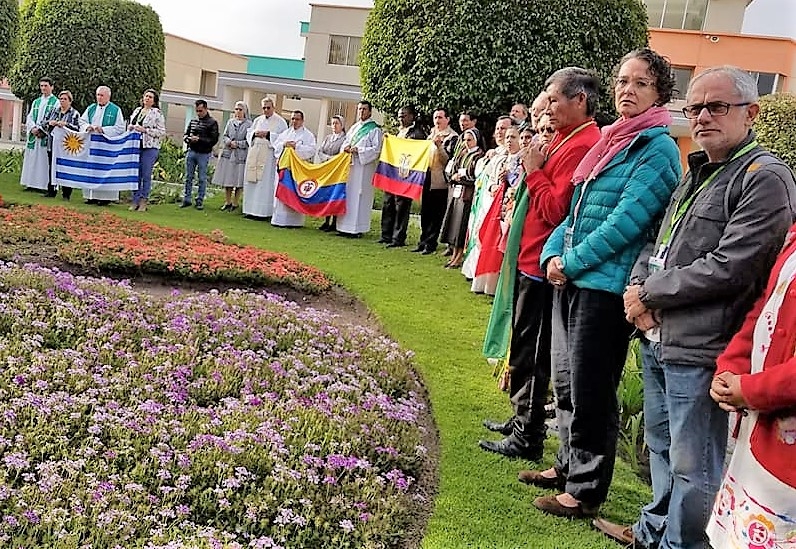 CIDSE, the international family of Catholic social justice organizations, and Iglesias y Minería, the ecumenical network of 70 grassroots organizations working on impacts of mining in Latin America, congratulate and welcome the recent publication of the Pastoral Exhortation of the Bishops of Latin America and the Caribbean “Missionary Disciples Custodians of the Common Home, Discernment in light of Laudato si’,” recognizing the valuable participatory effort in the elaboration of it.

As networks embedded in the communities affected by the extractive industries, we express our agreement with the analysis of the environmental gravity of the situation and the challenges that the Pastoral Exhortation of the Bishops of Latin America poses to us, in relation to the care of our common home, hence in the defense of the rights and territories of the communities.

Across the Latin American continent, there are copious cases of pollution and violations of human rights linked to mining. For example, in November 2015 a dam containing mining waste broke in the municipality of Mariana, Brazil. Millions of cubic meters of iron ore waste formed a wave of mud that destroyed homes, schools and churches, killing 19 people and contaminating the regional environment for years. CIDSE and Iglesias y Mining developed this multimedia dossier to raise awareness of the fight for justice of the afflicted people.

As Christian and Catholic institutions, we commit ourselves to spread the Pastoral Exhortation and make use of the contents that concern us according to our postulates. This implies “seeking paths of liberation together” and the formulation of “integral responses” (#5 Introduction), in particular listening to the appeals of communities affected by mining that have been vilified by nation states, companies and governments in turn, and renewing our commitment to continue serving them in the defense of their rights and their territories.

In this sense, we make our own the concerns of priests, nuns, lay people of congregations, movements, and diverse organizations that live with the populations surrounding extractive activities. It is there one can perceive that “climate change is making water management more complex, since it is causing more severe droughts and has accelerated the glacial retreat and increased sea level, among other impacts. This situation is aggravated by extractive activities (mining and hydrocarbons in particular), which entail the removal of vegetation cover in the area of such projects, impacting ecosystems where water courses originate. […] Despite all this, during the active life of the mining project, there is no consideration of measures to compensate for the impacts generated.” [ ] (#48 The impact of extractive activities on climate and water).

We emphasize that these communities should not be considered “a simple minority among others, but should become the main interlocutors, especially when it comes to the advance of large projects that affect their localities.” With their concept of Buen Vivir, the indigenous peoples of Latin America and the Caribbean present an alternative vision and radically question a purely economistic definition of development. The indigenous peoples have a much more integral vision and “possess a great stock of traditional knowledge about the sustainable use of natural resources” (DA 83) (Active participation of communities in project decisions # 117-118.123). This conceptual framework also calls on the countries of the global North to change their lifestyles in order to drastically reduce their consumption of natural resources and raw materials.

Father Dario, spokesperson of the Iglesias y Minería network, commented that “We are happy to see that our bishops have spoken on this important issue for Latin America, already discussed in Laudato si’ and other documents; the new CELAM letter will be a very useful tool for us in our work with communities and parishes throughout Latin America.”

On her part, Josianne Gauthier, Secretary General of CIDSE, declared that “we join our voices with those of our allies at Iglesias y Minería, as well as our sisters and brothers in Latin America, rejoicing in this powerful message of solidarity and illumination expressed by the bishops. The time has come to question our dependence on mining and our development model that undermines and threatens the common home.”

We commit ourselves to expand the dialogue, “building bridges” and convening our “elder brothers” gathered in international human rights organizations and churches in order to dialogue, and to demand their support of communities impacted by extractive mining activities, such as the Dicastery in service of Integral Human Development, DEJUSOL, REPAM and joint and network actions.

Notes for the editors:

• CIDSE is an international family of 18 Catholic social justice organisations working together with others to promote justice, harness the power of global solidarity and create transformational change to end poverty and inequalities.
www.cidse.org
Contact: Valentina Pavarotti, CIDSE Media and Communications Officer, pavarotti(at)cidse.org

• Iglesias y Mineria is an ecumenical network of around 70 grassroots organizations working on the front of mining violations in Latin America, through the expression of communities, and the communication to alter the impacts of mining, and strengthen churches as actors beside those impacted by extractivism.
www.iglesiasymineria.org
Contact: Padre Dario Bossi, Portavoz de la red Iglesias & Minería, iglesiasymineria(at)gmail.com

Encyclical Letter Laudato si’ of the Holy Father Francisco on the Care of the Common Home: http://w2.vatican.va/content/francesco/en/encyclicals/documents/papa-francesco_20150524_enciclica-laudato-si.html