Advocating for women rights in Palestine – CIDSE
Skip to content 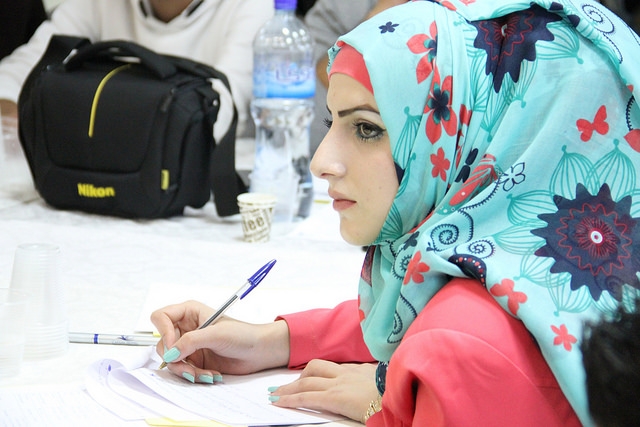 The group of which I have been director since 2009, the Women’s Affairs Center (WAC), is an independent Palestinian non-profit organization established in 1991 to promote women’s rights and gender equality within Palestinian society, by empowering and enhancing women abilities to address problems in the difficult context of their lives. Our vision is a centre based on women’s knowledge, which plays an innovative and catalytic role in empowering women, and advocating women’s rights and gender equality, as part of a sustainable process of Palestinian development. , In our research we have observed that Gazan women experience difficulties linked to the deterioration of the political, economic and social situation, which affect all aspects of Palestinian life. People face challenges directly related to the Palestinian-Israeli conflict and the prolonged Israeli occupation. This includes the escalations in hostilities, most recently in the summer of 2014, when nearly half a million Palestinians had to flee the fighting. It also includes the Israeli-imposed restrictions on movement of people and goods into and out of the Gaza Strip. We have furthermore observed that women are also affected by the patriarchal organization of society.

Marginalized communities in Gaza still have strong patriarchal culture, gender stereotypes, and gender-biased social attitudes that have limited women’s rights and gender equality. Many believe that women have traditional roles limited to reproduction and children rearing. Half of women reported being exposed to economic and social violence; nearly quarter reported physical violence, and more than 10 percent reported sexual violence. The majority of perpetrators are husbands, but other family members and strangers also inflict gender-based violence on women.
The patriarchal culture also means that families give preference to boys’ needs over girls’ in education, inheritance, and other rights. Early marriage constitutes a major area of concern. 36% of married women in the Gaza Strip were married before they turned 18, and 5% were married before their 15th birthday. This leads to many young women dropping out of school and there has been a decline in literacy among women (From 15.3% in 2001 to 5.9% in 2013).

The movement of women into and out of Gaza through border crossings is strictly limited. Women have been denied exit to follow university education, pursue work and receive medical treatment not available in Gaza. Women and their families are also denied movement in what is known as the “buffer zone” – a strip of land next to the fence between Gaza and Israel, in which Israel prohibits cultivation of the land. The “buffer zone” constitutes 35 percent of Gaza’s agricultural land, and its loss means severe reduction in income levels and in employment. Poor nutrition is prevalent amongst women during their reproductive years and anemia is high among women. Lack of access to hospitals outside the Gaza Strip and to a normal flow of food and income make women more vulnerable to these situations.

In conclusion, through our experiences, research and observations, we can say that Palestinian women’s movements face numerous challenges, even as they became an organic component of national struggle and activism. They are misrepresented in decision-making processes, and achieve only limited access to equal opportunities in the public sphere. At the same time, the Palestinian women’s movement has transformed from a grassroots struggle to an elite and professional issue which is led by dedicated NGOs. The leaders of this movement sought to use NGO structures to impact national policies. In doing so, women’s NGOs established themselves on the national map but lost some of the input from women at the grassroots level. Learning from the challenges facing the women’s movement, within WAC our mission is to empower women, conduct research into their needs, and advocate for their rights, guided by the principles of international human rights law, community participation, non-discrimination, and accountability to ensure justice and dignity for all women.

About the Author:
Ms. Amal Syam is the Director of Women’s Affair Center (WAC) since 2009. She holds a BSc in social science from Open Al-Quds University, and MBA in business administration from AL-Alzhar University, a diploma in NGO Management from Birzeit University and she is a PhD candidate in Egypt. Her specializations include women NGO’s strategic management, community-based rehabilitation of women and girls with disabilities, inclusive development, research and advocacy, and gender mainstreaming.
Ms. Syam represents WAC at the board of Palestinian Non-Governmental Organizations Network (PNGO) and other coalitions and forums. She led a research on Women’s and Men’s voices following the July-August 2014 Israeli military operations in the Gaza Strip supported by UNESCO.
Ms. Syam lives in Shijaia, eastern Gaza City, Palestine.