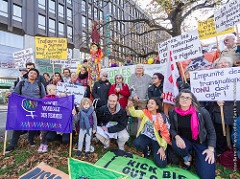 Today civil society groups from the EU member states have gathered at the UN in Geneva to support the Intergovernmental Working Group tasked with developing a binding instrument to ensure that businesses respect human rights. Last year valuable time and energy was wasted by attempts to hold up the process. We look forward to being able to get to grips with the real challenges, in the light of the very real dangers that communities, workers, activists and human rights defenders face now if they challenge business interests.

So far in 2018 we have had the informal consultations that the EU requested, and a chance to analyse the zero draft published in July which provides good starting point for negotiating a Treaty which will be effective. Support and momentum for this Treaty is building: the European Parliament adopted a resolution last week calling for the EU and its Member States to engage genuinely and constructively; on 1st October 150+ experts and leading academics, including many European academics, published a letter of support for the Treaty process; the recent statement of the European Network of National Human Rights institutions commented that “a business and human rights treaty building on the UNGPs three pillars should and can be complementary to the UNGPs.” The global trade union federations have called on all governments to come forward with substantive comments on the zero draft. This follows calls from the European Bishops Conference and the Latin American Bishops conference for constructive engagement by governments in the Binding Treaty.

As civil society of EU member states, we expect the European Union and its individual member states to bring their collective experience and perspectives to the discussion on the content of the treaty. This is particularly important on the key questions such as communities’ access to justice if things go wrong, corporate liability for human rights violations and mandatory human rights due diligence to predict and prevent harm in the first place. We have already done our own analyses of how the text can be strengthened so that global companies are required to respect human rights and the environment wherever they operate. The undersigned organisations are ready to support our government delegations, parliamentarians and MEPs in this historic task.